Most Famous Historical Monuments in Karnataka

A prized treasure, Karnataka in South India is a state of myriad delights. Owing to the vast history and heritage monuments in Karnataka in addition to the diverse topography, it is favored by travelers and especially the history buffs. Centuries-old legacy, magnificent architecture, massive palaces still owned by royalty, holy revered temples to the UNESCO World heritage sites, there is a lot to be discovered.

Carefully picked from an extensive list, here are the top 15 must visit historical monuments in Karnataka. 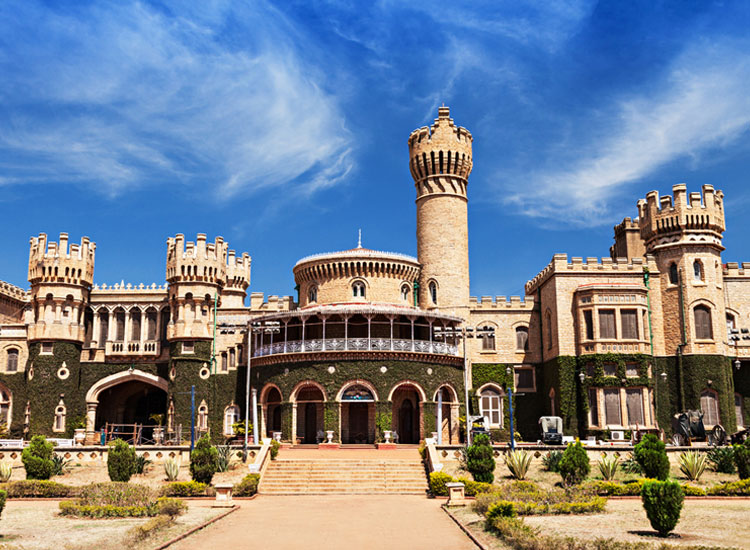 
Bangalore Palace built in the year 1944 by Wodeyar dynasty is adored for magnificent woodcarvings and Tudor-style architecture. The historical monument is one most visited tourist attractions in Karnataka. The palace has an architecture that is quite similar to castles built in Normandy and England.

Although the palace has lost much of its original work but it still manages to attract tourists. One can still behold the fortified towers, gothic windows, battlements and turrets. The interiors are made beautiful with impressive 19th century paintings. The other attractions include a dining table of the Diwan of Mysore, Sir Mirza Ismail. 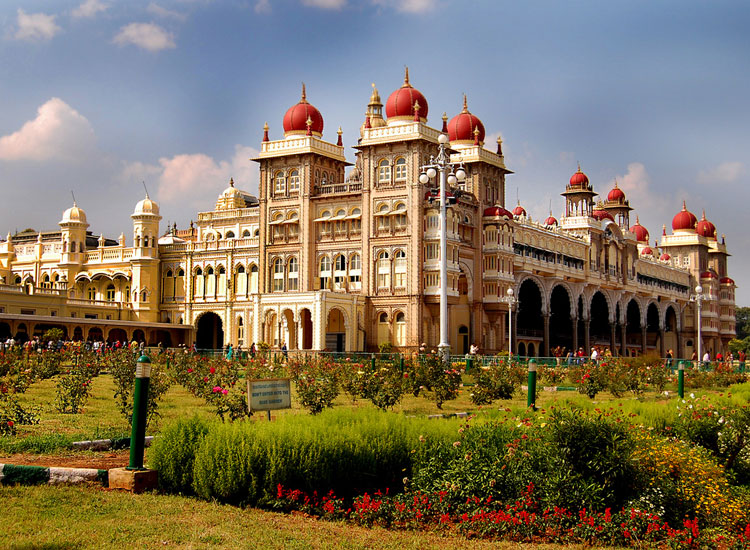 The royal Mysore Palace is an official residence and seat of the Wodeyars. One of the most famous places to see in Karnataka, the palace must be included in every Karnataka tour. It has an Indo-Saracenic layout with a tinge of Hindu, Islamic and Gothic architectural styles.

The three-storey stone structure with marble domes has a 145-feet five storey-tower surrounded by a large garden. Further, there are three temple buildings within the Old Fort and 18 inside the place heart that overlooks the scenic Chamundi Hills. A fine marvel of architecture, history and tourism, it is an unmissable delight of South India. 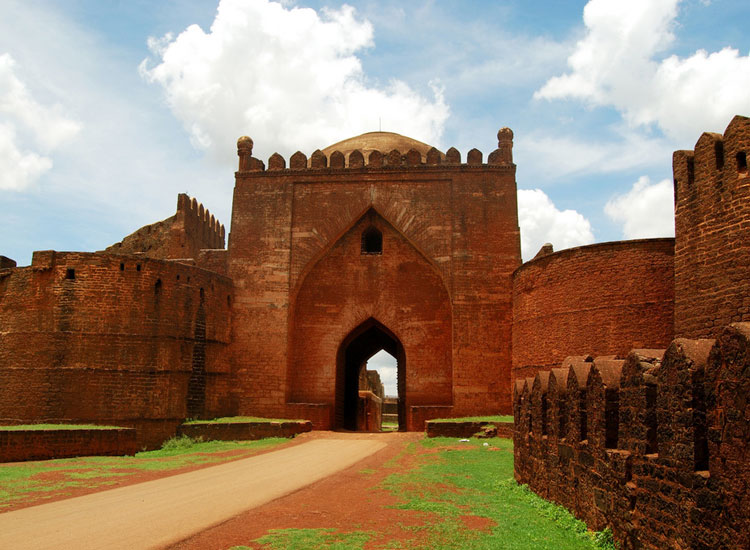 Located on the edge of Bidar Plateau, the Bidar Fort is an important historical monument in Karnataka. Built by Adil Shah in the 15th century, it is a fine specimen of red laterite stone. It has numerous monuments within its complex, including the Rangin Mahal, the Takht Mahal, Jami Masjid and the Sola Khamba Masjid.

One of the unusual features of the fort is the historic water supply system, called karez. It is basically a network of underground tunnels to the houses of the people for various uses like drinking, washing, watering livestock, and irrigating fields etc. 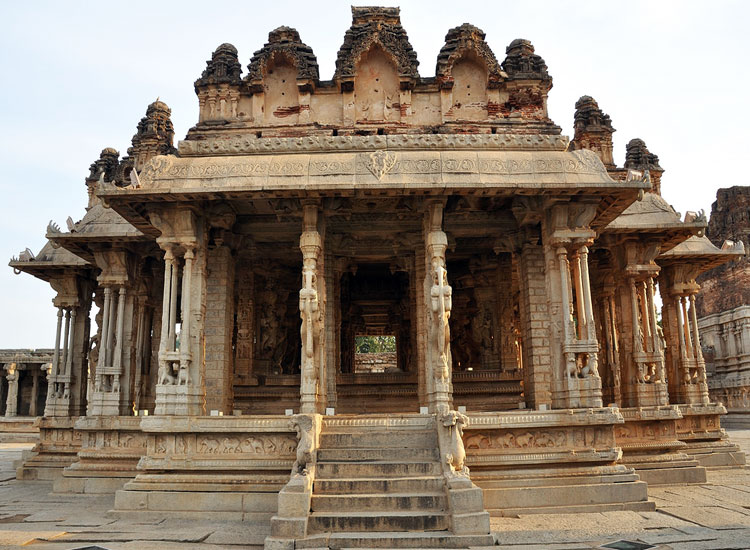 A part of the UNESCO World Heritage Site of Hampi Group of Monuments, the 15th century, Vittala Temple is one of the popular historical places to not miss in Karnataka. The temple is located in Hampi, on the banks of the Tungabhadra River.

It is the most ornate of the Vijayanagara temples, also presumed to be the grandest. The temple exemplifies the immense creativity possessed by the sculptors and artisans of the Vijayanagara era. The classic example of Dravidian style of architecture, it has traits and features that are characteristic of typical south Indian temple. Elaborate, artistic carvings and magnificent architecture is unmatched. 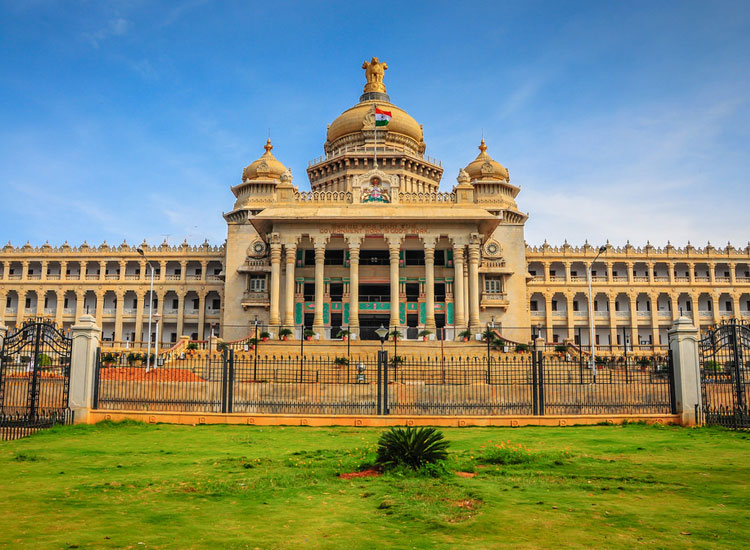 One of the most famous landmarks of Bangalore, the Vidhana Soudha houses the State Legislature and the Secretariat of Karnataka. Spread over 60 acres, the white building boasts of exquisite architecture.

Build in the 1950s the edifice is secular mix of British, Dravidian and Indo-Islamic architecture. Entry is allowed only on a guided tour. One of the main attractions among locals and tourists is the lighting up of the building on every Sunday evening. The carved pillars, bases, pediments, comices and arches make it a truly incredible architecture. 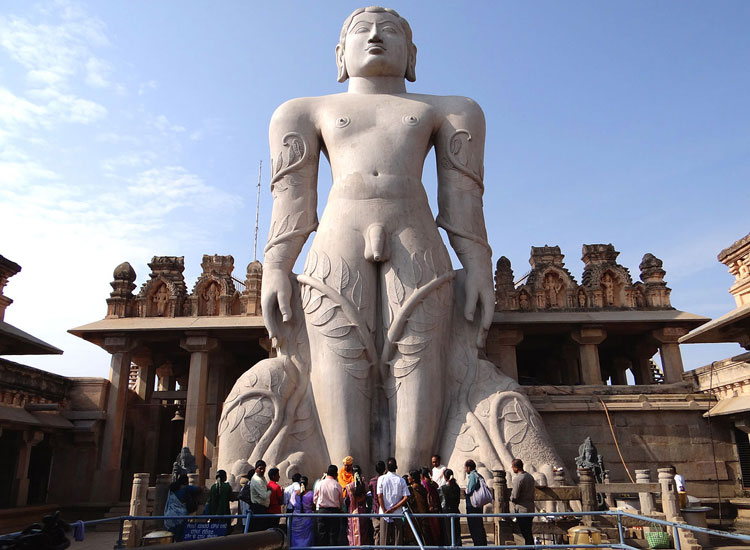 The statue of Gomateshwara is amongst the must see historical monuments in Karnataka. The massive statue was built in around the year 981 and is till date one of the largest free-standing statues in the world.

Built during the rule of Ganga Dynasty, the awe-inspiring monuments has not lost its charm but still appreciated for its magnificence. A steep climb takes you to in presence of the exquisite structure. The colossal statue has brought attention to Shravanabelagola as one of the important Jain pilgrimage sites in India. It is one of the unmissable highlights of Karnataka heritage tours.

[Plan your India heritage tour with our tailor-made packages.] 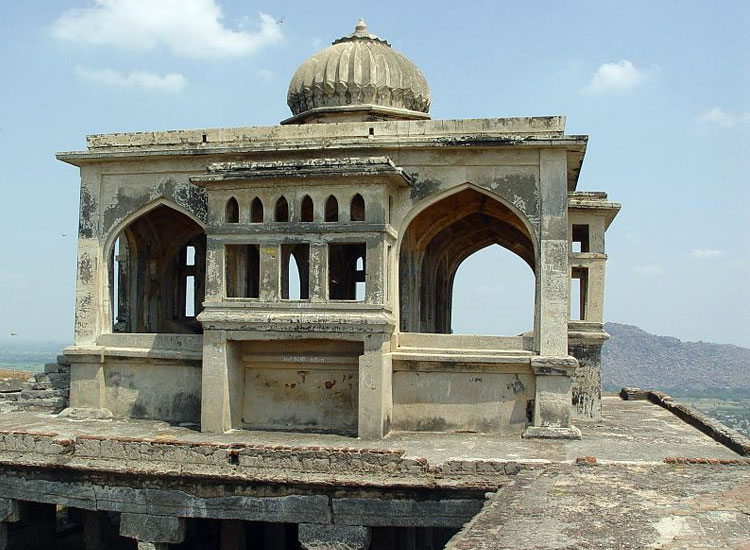 Bijapur is one of the important historical places in Karnataka and especially the Citadel. Built in the 16th century, the Citadel is centrally located in the Bijapur Fort. It is surrounded by a wide moat that supplied water to the inhabitants and has a number of structures like palaces, gardens and halls. The ruins do not decrease its appeal.

The highlights of the Citadel include the royal palace of Gagan Mahal, seven-storied Sat Manzil, the famous water pavilion Jal Manzil, and the twelve-arched Bara Kaman.. Re-living the power of Adil Shah Rulers as you explore the massive citadel. 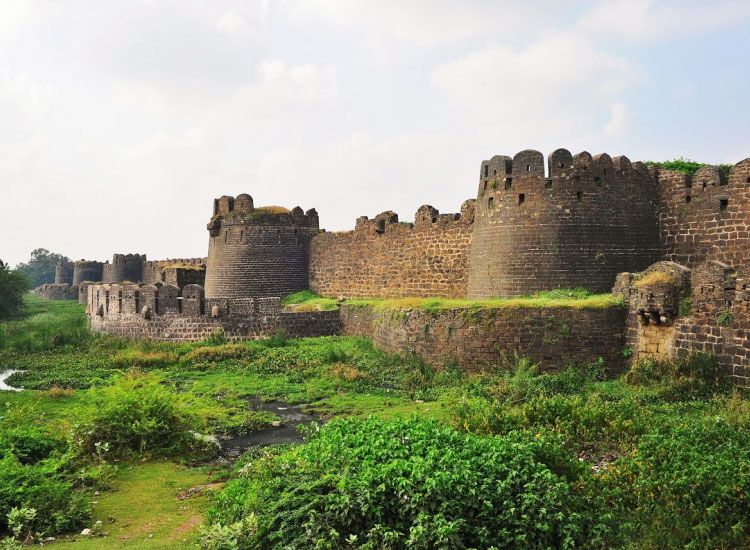 The 14th century Gulbarga fort is one of the finest examples of the ancient Islamic architecture in Karnataka. The fort was originally built by Raja Gulchandbut when it became the Bahmani capital, it was fortified by Alauddin Bahmani with a deep moat and massive walls.

The impressive highlights are the fort itself, Jama Masjid and the Kwaja Bande Namaz tomb. The tomb of the saint is highly revered and is adorned with arches, paintings in Iranian and Turkish style. Urs festival witnesses a lot of devotees. The fort is a historic as well a popular pilgrimage site in Karnataka. 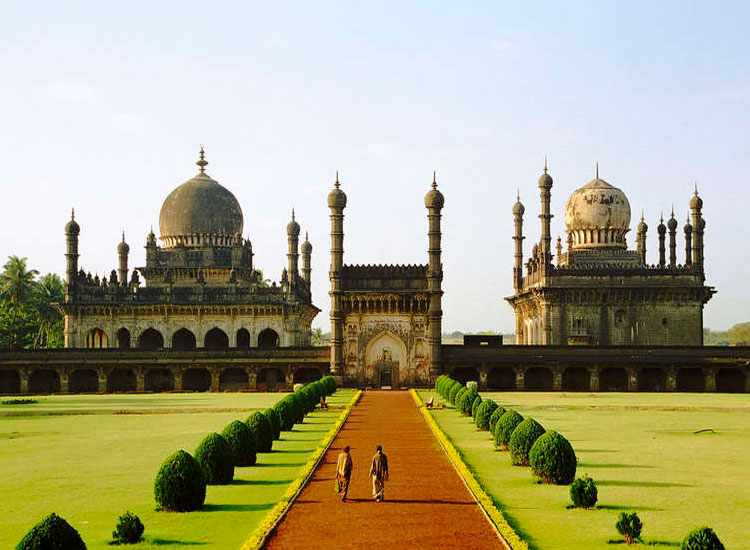 Our next historic site is one of the most important tourist attractions in Karnataka. Built by a Persian architect in the 15th century, it’s an architectural masterpiece formed by the fusion of Hindu and Muslim styles.

The beautiful adornments of Ibrahim Rauza is its mosque, tomb, a tank and fountain. It has an amazing look. Crowned with a bulbous dome, shaded by a chhajja and a lean minaret each corner of its five arched-façade, the monument is a beauty. Walk amid the monument and you can imagine the bygone days for yourself. 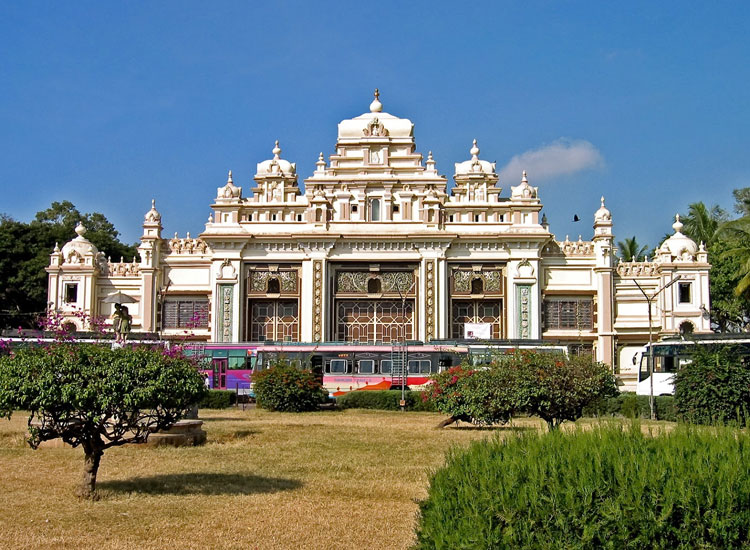 Housed in the breathtaking Jaganmohan Palace in Mysore, the Art Gallery is a treasure of heritage in Karnataka. Named, Sri Jayachamarajendra Art Gallery, it is one of the largest collections of artifacts in South India. 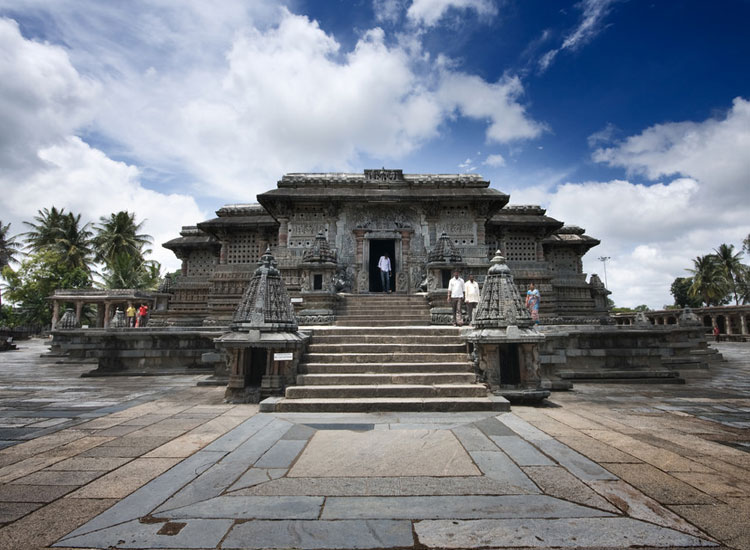 The 12th century capital of the Hoysala Empire, Halebid is home to a number of heritage monuments in Karnataka. One of the best examples of the Hoysala architecture and the largest shrines dedicated to Lord Shiva in South India, the Hoysaleswara Temple is a beauty to explore.

Hoysaleswara Temple is known for carvings and sculptures with metal like polishing. The walls are ornamented with life-like mythological deities. The remarkable structure has been acclaimed as the ‘supreme climax of Indian architecture’. Walk through the ancient complex, pay obeisance to the Lord Shiva and get enthralled by the superior craftsmanship of the temple artisans. 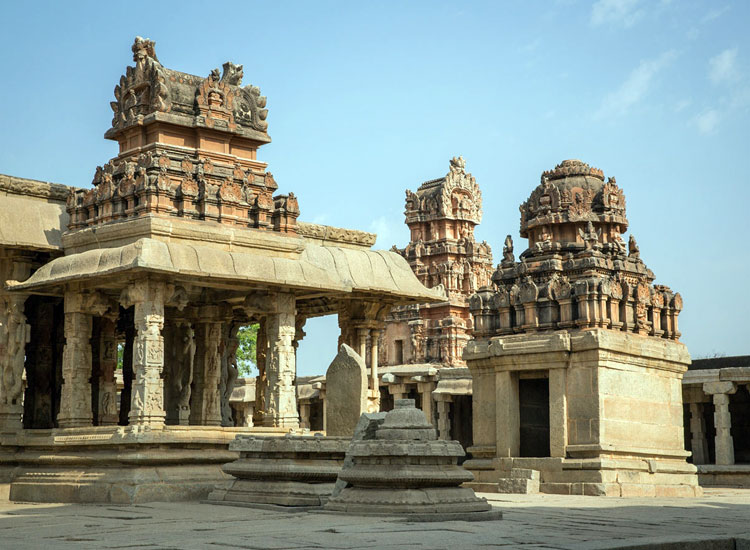 A splendid treasure of the past, the Achyuta Raya Temple is one of the grand heritage sites in Karnataka. An example of Vijayanagara style of architecture. It was the last grandiose temple built before the fall of the empire. The temple lies in ruins but its glory remains the same.

The temple worships a form of Lord Vishnu, Lord Tiruvengalanatha. Exquisite cravings and every kind of ornamentation cover the temple. There are various themes and episodes from the Hindu Mythology which has brought to life from the monolithic stones. This is one of the historic place that you must not miss in Karnataka. 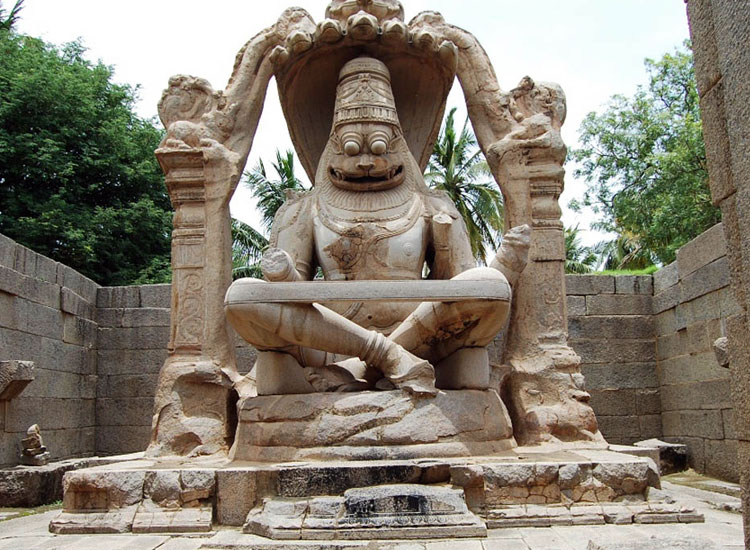 Another historic tribute to the Vijayanagara Empire, the Lakshmi Narasimha Temple is one of their finest creations. Housing the largest monolith statue in Hampi, the temple also goes by the name of Ugra Narsimha.

Erected on the Hemakuta Hill, this gigantic stone structure is originally comprised of the ferocious Narasimha, one of the ten avatars of Lord Vishnu, and the Goddess Lakshmi seated on his lap. The rich artistic heritage of the Vijayanagara Empire is seen in this marvelous creation. Every detail has been carefully re-created on stone. This is one of the best heritage monuments to visit in Karnataka.

[Choose heritage hotels in Karnataka as your accommodation option.] 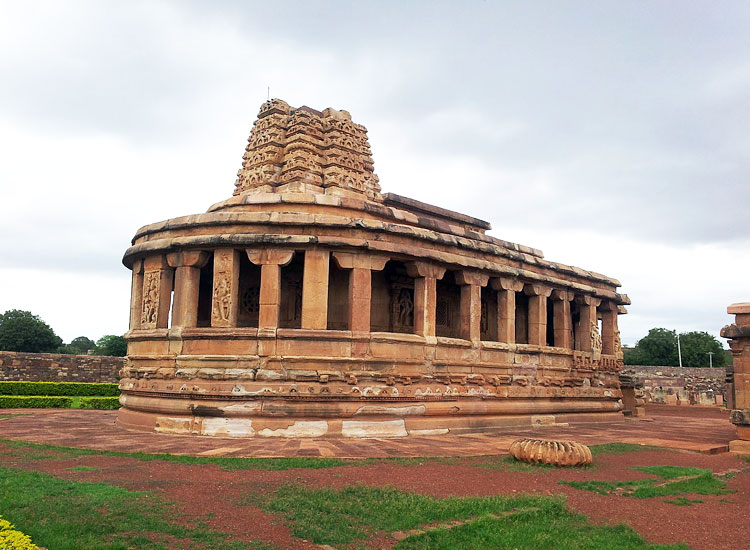 The Aihole Historic Temples are one of the most popular heritage sites in Karnataka. Settled on the banks of river Malaprabha, the legendary town of Aihole was once, the capital of Chalukyas dynasty. It was considered the cradle of Hindu temple architecture with more than 125 temples.

Built during the 5th to 8th centuries, the main temples have witness centuries of dynasties, rule and changing time. Most of the monuments are well preserved by archeology department and several other sites are still being renovated. The main monuments in Aihole are Durga Temple, Ladkhan Temple, Ravana Pahadi and Archeology Museum. 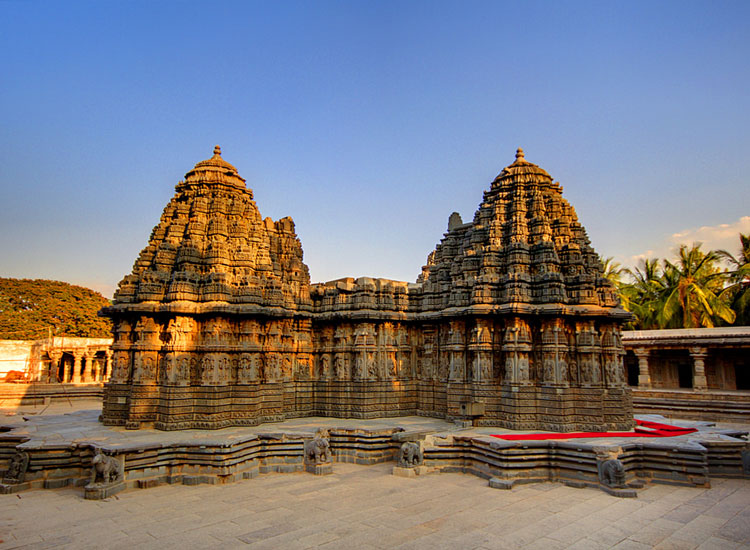 Close to Mysore, Somnathpur village is an epitome of excellence of the Hoysala architecture. One of the protected monuments in India, the Somnathpur heritage site in Karnataka, is well-maintained by the Archaeological Survey of India.

The historic village displays the supremacy of the Hoysala rulers. The architectural design, the detailed carvings and engravings and to add to it unmatched charm makes it one of the best historic places in Karnataka. The deity of Chennakeshava, the idols of Keshava, Janardhana and Venugopala were the poojamoortys (deities) of this Vaishnavite temple are the highlights of the quaint village.