India is a vast and diverse country with a history dating back to 5000 years back. The present day India introduces itself as a tourist destination which is thronged by thousands of people throughout the year. It is home to many tourist destinations that attract the travelers from all over the world. During your tour to India, you will have a great tourism experience that will linger your mind forever. Further, several spiritual leaders and founders of many popular religions of modern India have developed in India. Here you will see many interesting places that will depict India’s culture, history, tradition, heritage and geographical beauty. Here’s a list of top 20 heritage sites in India for your kind perusal. 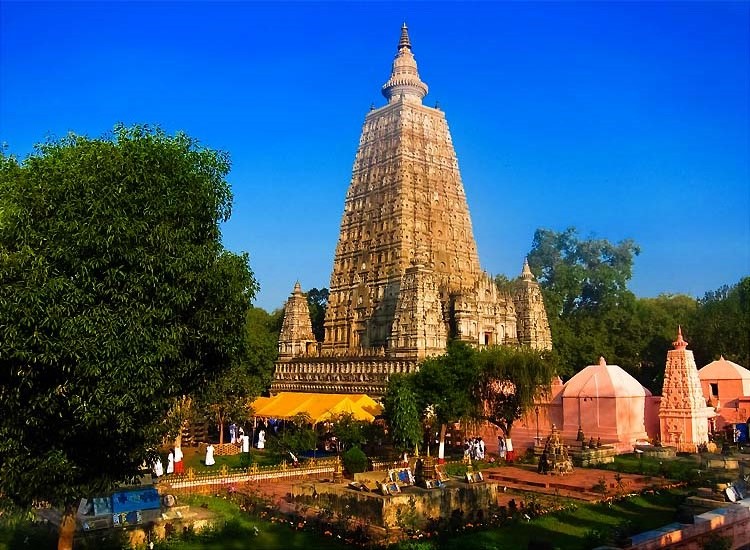 Declared as a UNESCO World Heritage Site, the Mahabodhi Temple is one of India’s prominent spiritual destinations. The place has a historic prominence as it is the place where Lord Buddha attained enlightenment. This elaborately crafted and immaculately designed complex has a very soothing and serene ambience. The sacred Bodhi tree dwelling within the complex of the temple is a spot where Buddha used to meditate for outdoing the cycle of rebirth. 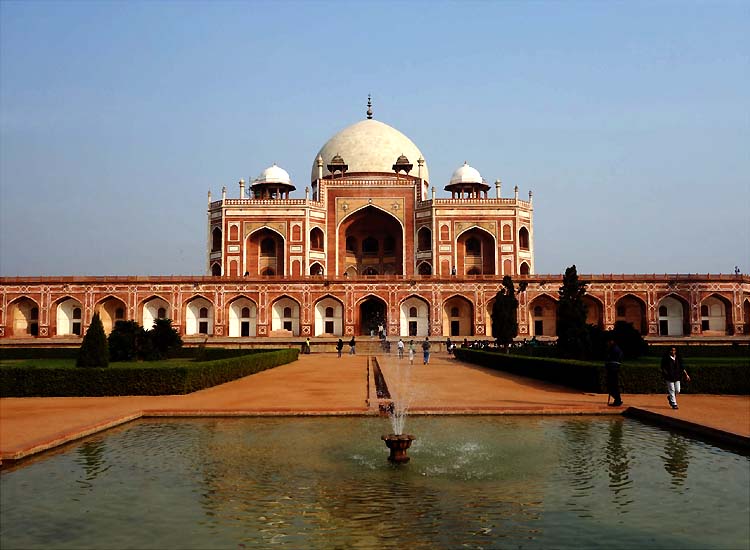 One of the must-see sites while visiting Delhi, Humayun Tomb has the privilege of being the first tomb garden on the Indian subcontinent. The inlaid title works, carvings comprising of both Indian and Persian decorative elements, and carved stone screens are a few highlights of Humayun Tomb.

When it comes to magnificent heritage holidays, exploring the glorious complex of the Red Fort is must. Constructed as the palace fort of Shahjahanabad, which was the new capital of Shah Jahan, Red Fort stands as a testimony to the majestic power and pomp of the emperor. The Red sandstone walls of this massive complex, which are 33 meter high, were constructed in 1638 to prevent the entry of the invaders. 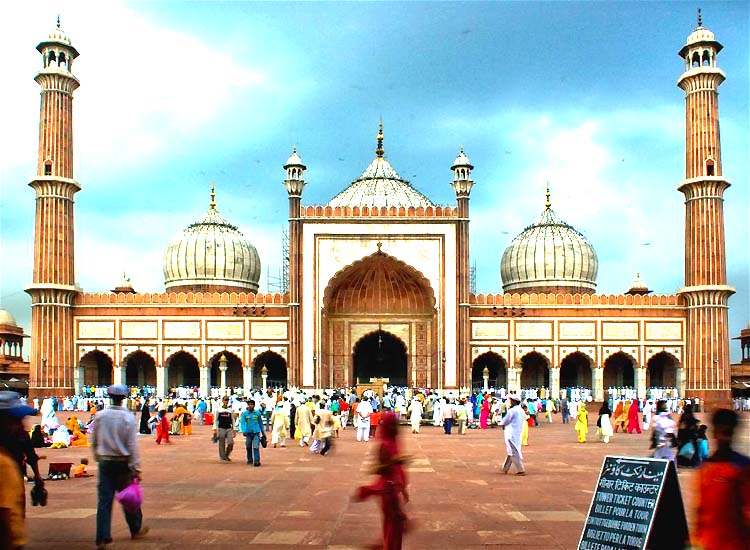 Out of the many beauties in Delhi, Jama Masjid is the largest mosque in India. The foundation stone of Jama Masjid have been established by Muhammad Ali Shah, but unfortunately due to his death could not see his own mosque. The extravagant mosque possesses three vast gates, four towers and 40 meter high minarets. 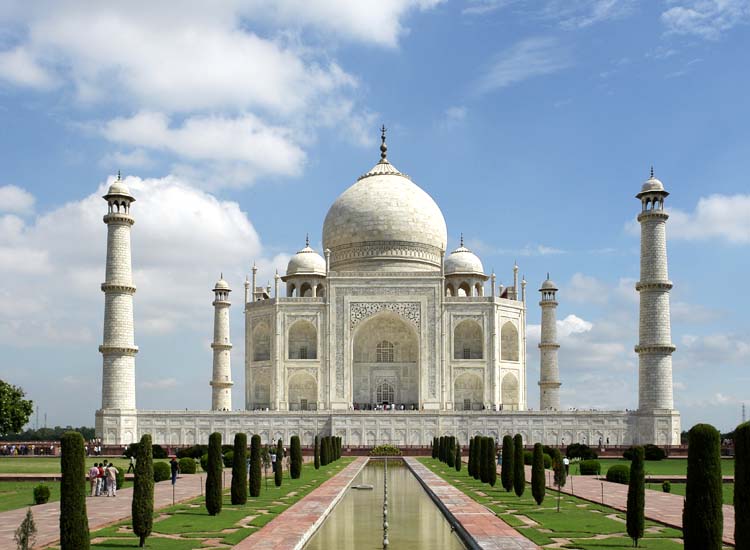 Famously called as ‘teardrop on the cheek of time’, Taj Mahal represents undying love and seventh wonder of the world. It was constructed by Shah Jahan who was the most successful Mughal Emperor of India. The reason why people visit to this place in India, Agra a home of 3 world heritage sites in India, people come from all over the world is that it looks beautiful in bright sunlight and exhibit intricate carvings. 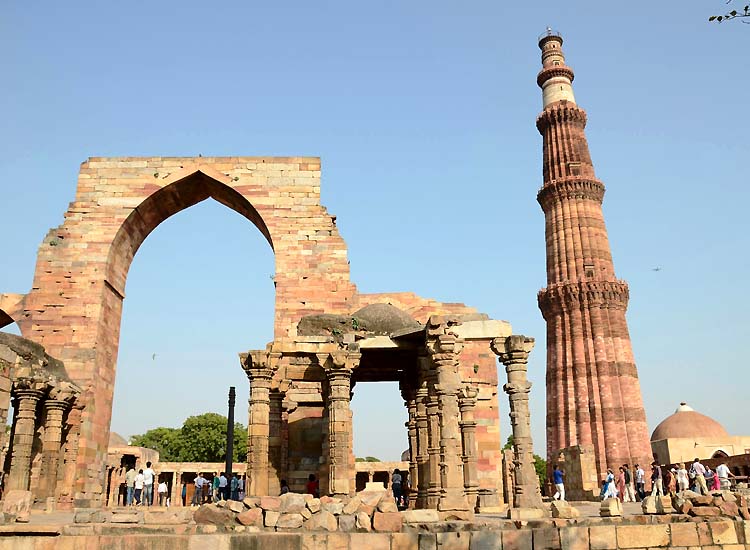 Entirely made up of buff and red sandstone, Qutub Minar is one of the highest stone towers in the world. Built in the 13th century, the magnificent tower stands in the Indian capital of Delhi. Characterized by humungous proportions, the tower has a diameter of 14.32 meter at the base and about 2.75 meter on the top. It was built to commemorate the victory of invading Islamic armies over the native Hindu rulers.

Group of Monuments at Hampi, Karnataka 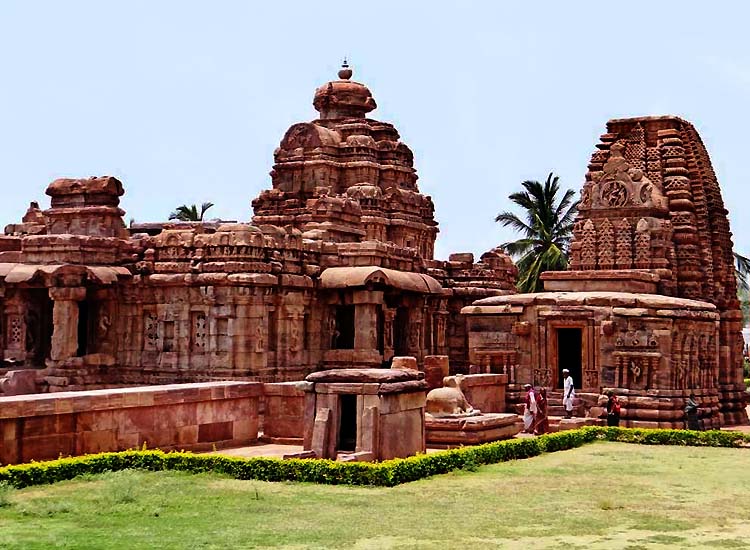 Hampi is a village in Karnataka located within the ruins of Vijayanagara Empire. It was once the last capital of Vijayanagara Empire. It is a historical place and very popular among tourists with its temples, religious places and ruins, collectively called Hampi Group of Monuments. This spot was displayed as a UNESCO World Heritage Site in the year 1986. There are several Dravidian temples and palaces that were constructed during the 14th and 16th centuries and are of big vitality for both historians as well as architects. 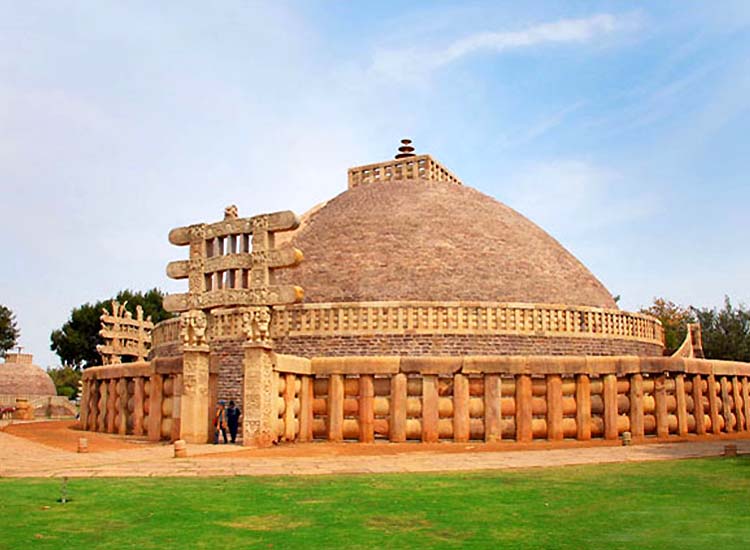 Ranked among the well-known Buddhist pilgrimage sites, the Buddhist Monuments at Sanchi include stupas, monasteries, Buddhist temples and other religious monuments. In this plethora of monuments, a world renowned monument that gets highlighted is the beautifully done great stupas. Hundreds of tourists also come here to see the famous Anand Bodhi tree. 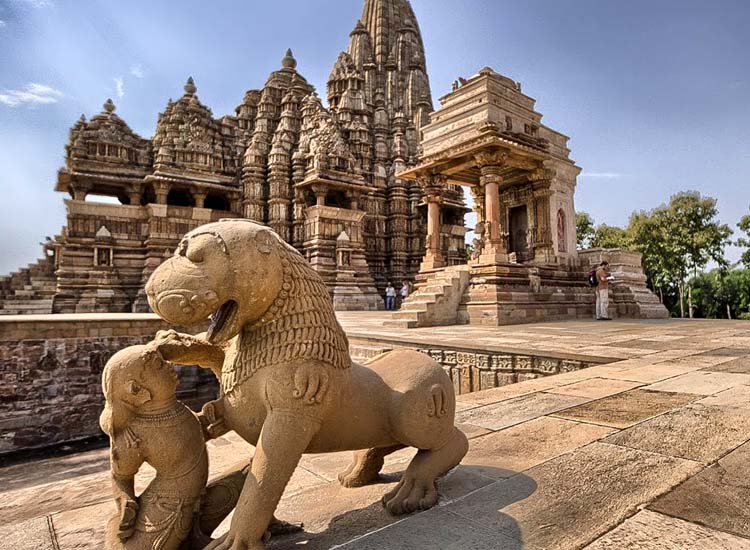 The sheer beauty and marvelous architecture of Khajuraho Group of Monuments, which have made them listed as UNESCO World Heritage Site. The carvings on the inner and outer walls depict the sex education. However, these temples also contain the idols of gods and goddesses as well. As per the report of Archaeological Survey of India, there were 85 temples that were initially built but today only 22 exist. All the monuments have entrance hall, a sanctum, vestibule, fresh air and proper light. 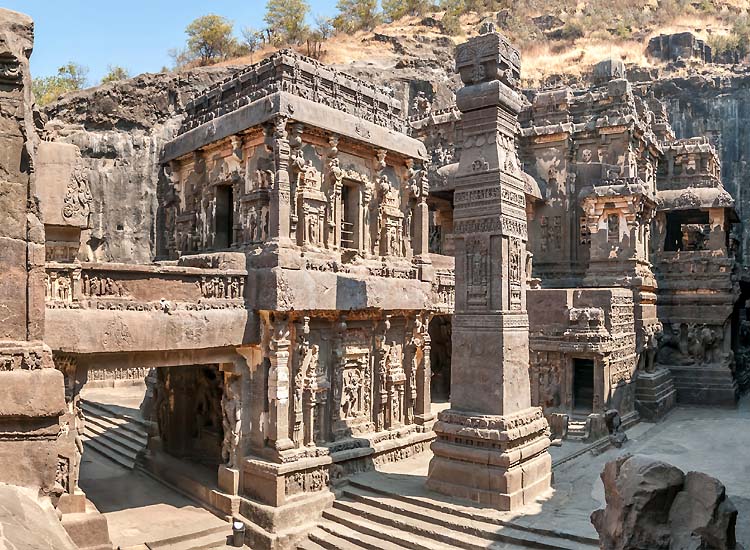 Ajanta and Ellora Caves are the pride representatives of India’s architectural heritage. These two mind-blowing caves are world famous for their cave shrine that has been cut from rock all by using hand. These caves were hidden for a long time until it was discovered by the British Army officer John Smith during a hunting expedition in the year 1819. Ajanta Caves has been designated as a World Heritage Site by UNESCO. The paintings and sculptures present in these rock-cut caves are just awe-inspiring. 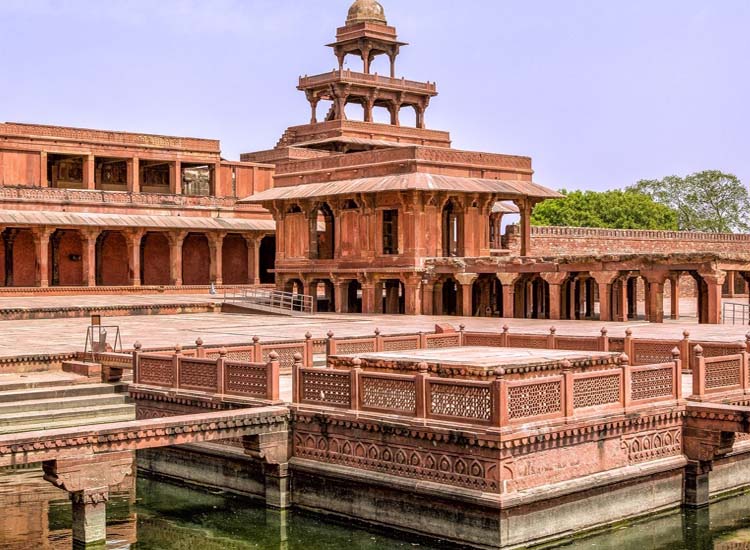 Fatehpur Sikri, a premier example of Mughal architecture in India, is a popular tourist destination in the northern part of the country. It is mainly a historical city and was built by the Mughal Emperor Akbar in the 16th century. Initially it was known as Fatehbad, and then later on it acquired the name of Fatehpur Sikri. Being the first planned city by the Mughals, it is the combination of three cultures- Indian, Islamic and Persian architecture. 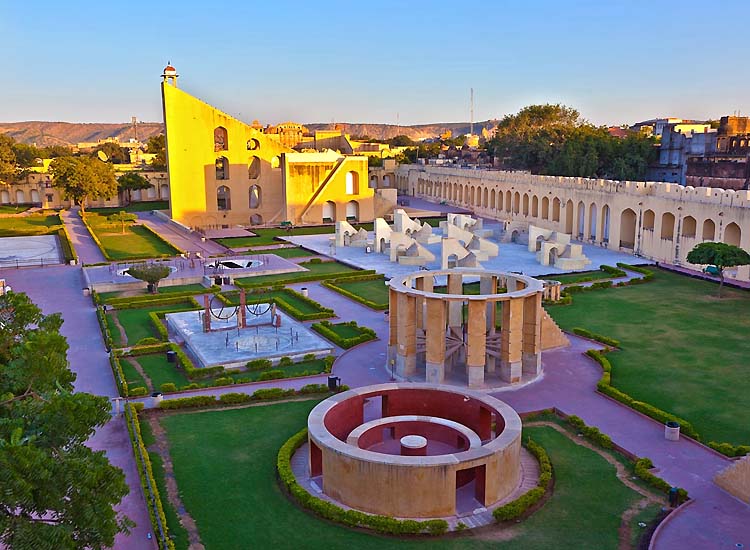 One of the largest observatories in India, Jantar Mantar is a perfect amalgamation of religion, art and science. There were five observatories built by the king of Jaipur ‘Maharaja Jai Singh II’. Among those five, the observatory of Jaipur is the largest. The magnificent structure was constructed in 1720 and one can also find a huge sundial here. The astronomical observatory in Jaipur has fourteen major geometric devices that help in capturing the interests of astronomers, historians and architects.

Know about some heritage hotels in Jaipur here: https://www.heritagehotelsofindia.com/jaipur/ 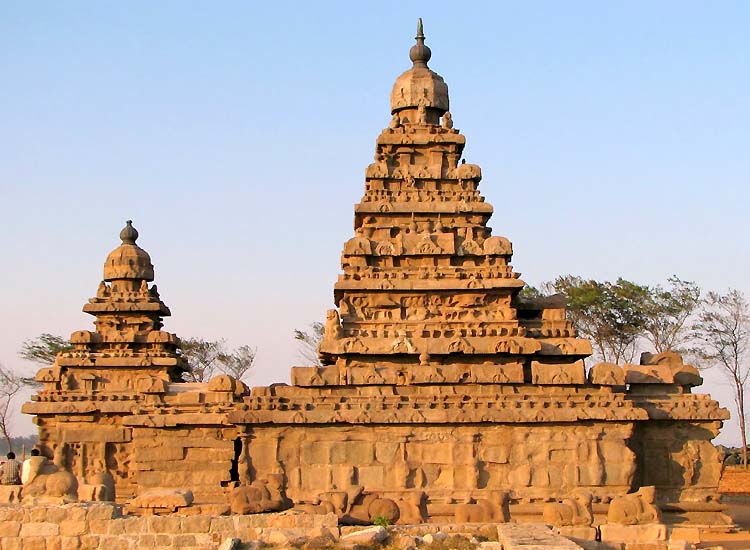 Unparalleled in aesthetic appeal, the temple complex of Mahabalipuram is one of the most wondrous tourist destinations in South India. These temples are truly fascinating to the hilt. The beautiful beaches, serene environment, ancient temples and rich cultural heritage attract tourists from all around the globe. Some major attractions of Mahabalipuram include Shore Temple, Arjuna Penance and Pancha Rathas.

Group of Monuments at Pattadakal, Karnataka 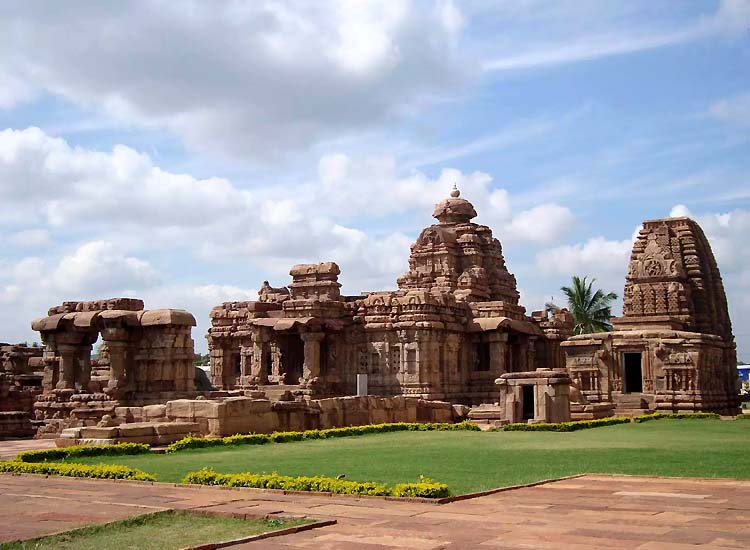 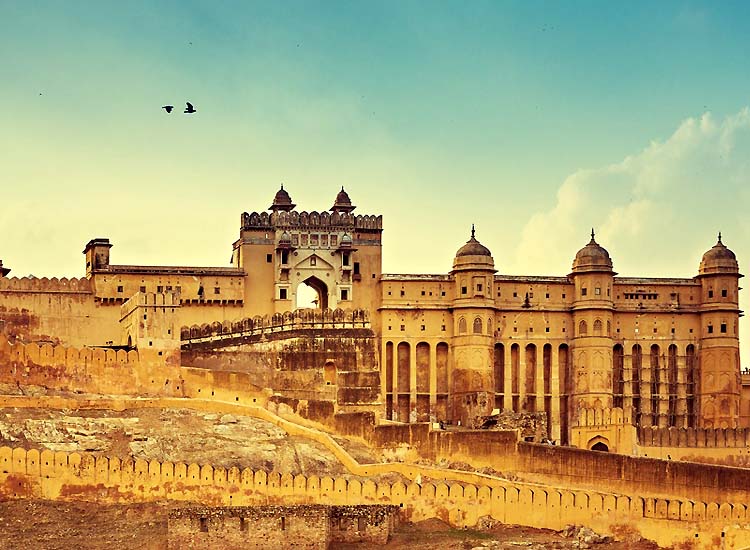 One of the best places in the world, Amber Fort epitomizes the glorious heritage of Jaipur. Carved out of red sandstone and white marble, the fort was built by Raja Man Singh I in 1592. It is considered as one of the finest hilltop forts in India. There is a beautiful lake in the foreground of the fort which adds more beauty to it. 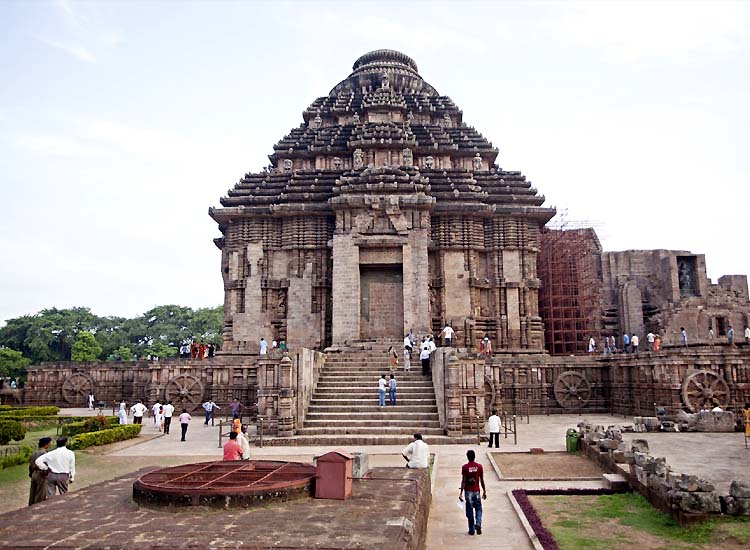 Located on the banks of the Bay of Bengal, the Sun Temple is not only a celebration in stone but its present is as thrilling as his past. The temple at Konarak represents Sun God chariot. Chariot’s 24 wheels are graced with beautiful designs and it is headed by six horses. Built in the 13th century, the temple is one of India’s most famous artistic marvels and portrays the grace. 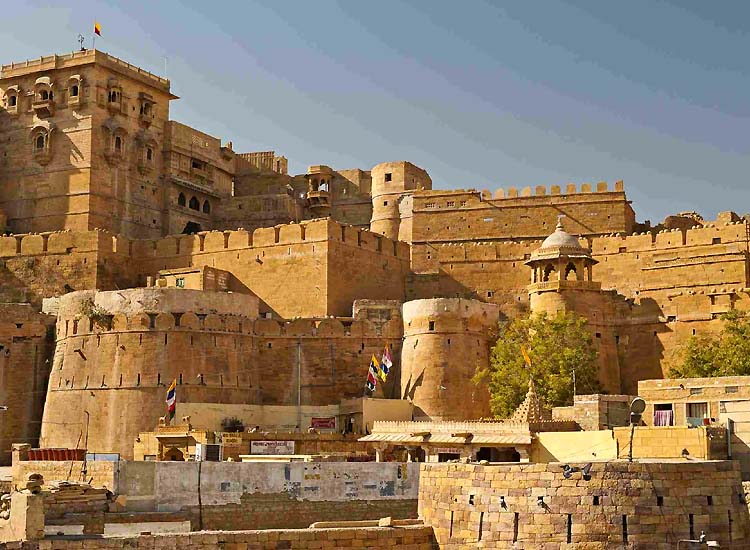 Built on the Trikuta Hill in 11 56 AD, the Jaisalmer Fort derives its name from its founder, Rawal Jaisal. It is one of the largest forts in the world and still has a major population of Jaisalmer residing within the premises. Built entirely of yellow sandstones, the fort is built by Raja Jaisal on the top of the Trikuta Hill in the 12th century. The fort exhibits a seamless fusion of Rajput and Islamic architectural styles. 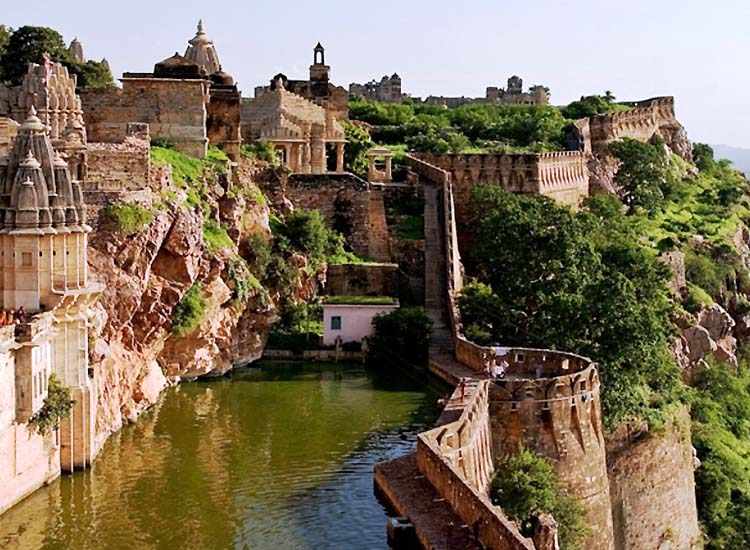 One of the largest forts in India, Chittorgarh Fort is located in the state of Rajasthan, It stands 500 feet high and the area covered by the fort is 700 acres. This massive fort has 65 medieval structures, 4 palace complexes, 19 temples, 4 war memorials and 22 water bodies. This hill fort is believed to have been first built by Mauryan rulers during the 7th century AD. 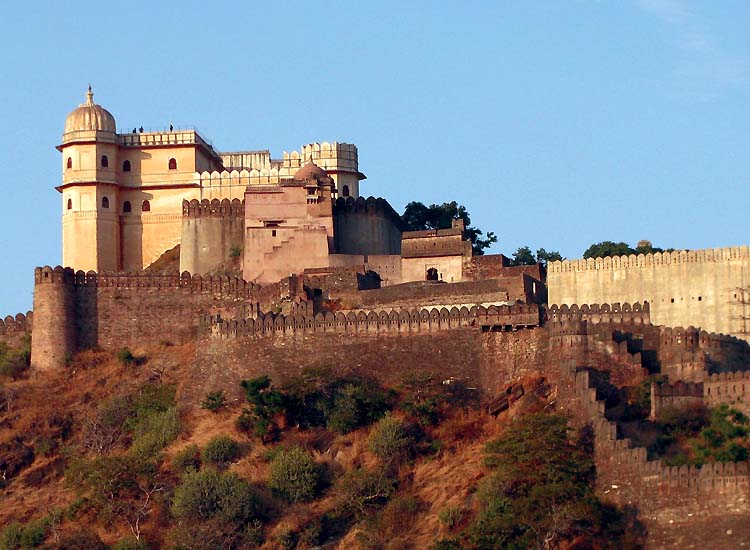 Standing at a height of 1100 meters, the Kumbhalgarh Fort, hemmed in by three mountain peaks, has walls extending up to 36 kilometers in length which makes it the third longest wall in the world. Also it is the second most important fort in Rajasthan after Chittorgarh Fort. The major attractions of this fort are its fortified walls, 7 gateways and 360 temples within its premises. 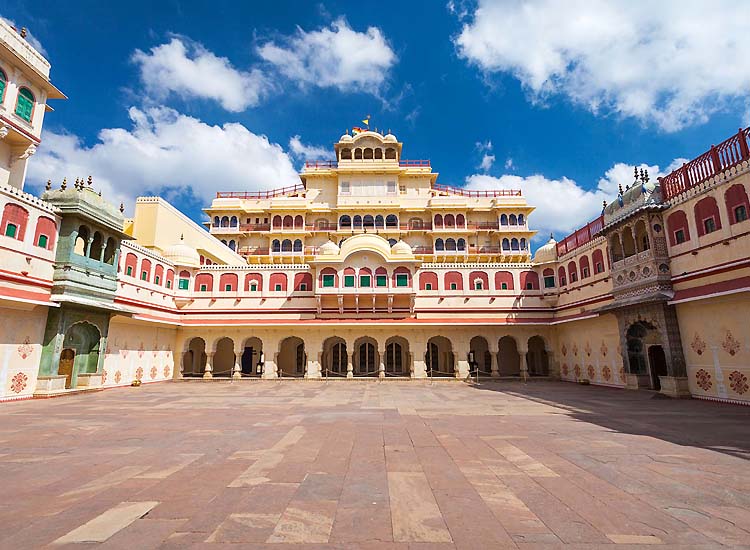 This grandiose building was built by Maharaja Sawai Jai Singh which is considered to be the spectacular gem of architecture of the medieval India; it is the finest example of the Mughal and Rajasthani style. Tourist flourishes to this palace across the world to witness the ancient relics and artifacts of the Rajput dynasty in the City Palace museum. This place is well connected with a good transport facility.

You can also check out some other heritage and historic sites in India Here.