Maharashtra is the land of historic and magnificent monuments. From the days of Maratha rule to the British colonial days, every era has left behind treasures. Each of the historical monuments of Maharashtra has a lot to say about their golden days. Take a journey back to the past as you explore the monuments of the state. From the caves to iconic landmarks, ancient temples to tributes of glory, there are majestic specimens of craftsmanship that you must take a look at.

The large expanse of the state is dotted with a long list of marvelous specimens of architecture from all eras. Take a look at the best of the heritage sites of Maharashtra. 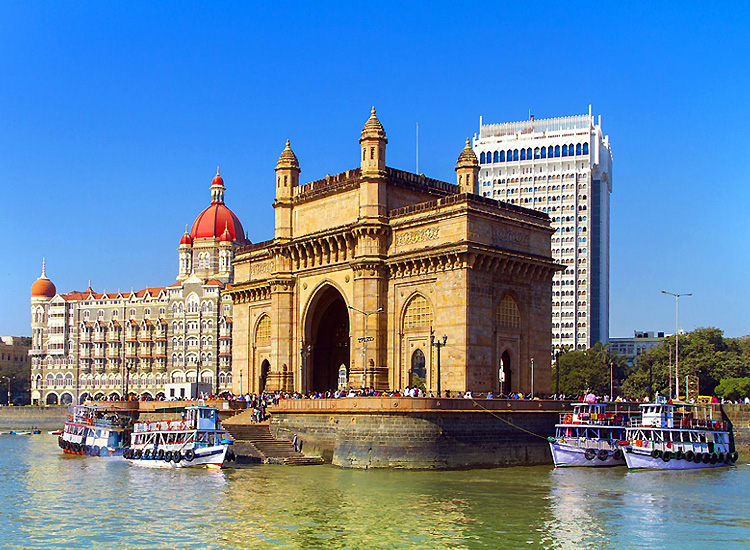 Let’s start our blog with the historical landmark in Mumbai, Maharashtra’s capital city. The Gateway of India is an icon among architectures in India. The 20th century arch-shaped gateway overlooks the Mumbai harbor and the cerulean waters of Arabian Sea beyond. It was built in honor of the visit of King George V and Queen Mary. An excursion to this architectural wonder is the major highlights of Maharashtra heritage tours.

Indo-Saracenic in style with touch of Muslim Architecture along with intricate latticework, the historical monument is truly magnificent to look at. Also enjoy the view of Taj Mahal Hotel and the surroundings, especially at sunset. 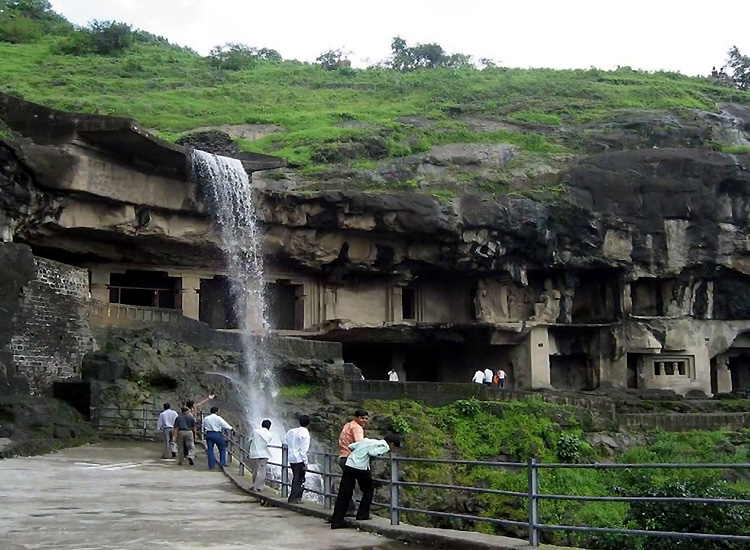 Moving on with the famous historic sites in Maharashtra, we come to the Ajanta and Ellora Caves. While not historical monuments exactly, these caves are treasures from history. Carved into the hills in the Aurangabad district, these ancient caves are listed as UNESCO World Heritage Sites in India.

The 34 caves at Ellora date between the 6th and 11th centuries AD, while the 29 caves at Ajanta date back between 2nd century BC and 6th century AD. The Ajanta Caves are all Buddhist shrines said to be carved by monks with their own hands. The Ellora Caves are a mixture of religious caves of Buddhist, Hindu and Jain faith. Each of these caves are truly picturesque delights of the glorious history of Maharashtra. 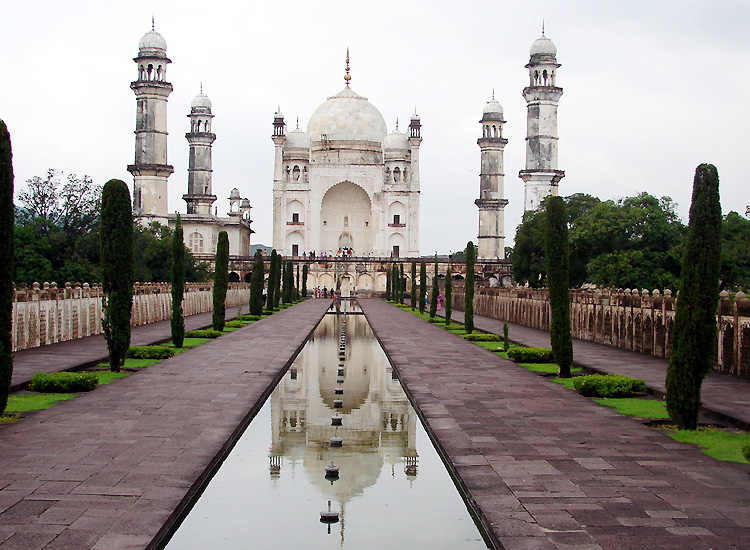 The Taj Mahal is one of the wonders of the world and a matchless beauty, Maharashtra too has one copy. The Bibi Ka Maqbara also known as the Dakkhani Taj is one of the popular historical monuments of Maharashtra. In the city of Aurangabad, the former province of Mughal empire this structure is a replica of Taj Mahal though not that ostentatious.

History states that the building was built in memory of Mughal emperors Aurangzeb’s wife by her eldest son, Azam Shah in the late 17th century. It is one of the last of the impressive Mughal structures and the very few ones in the Deccan region. 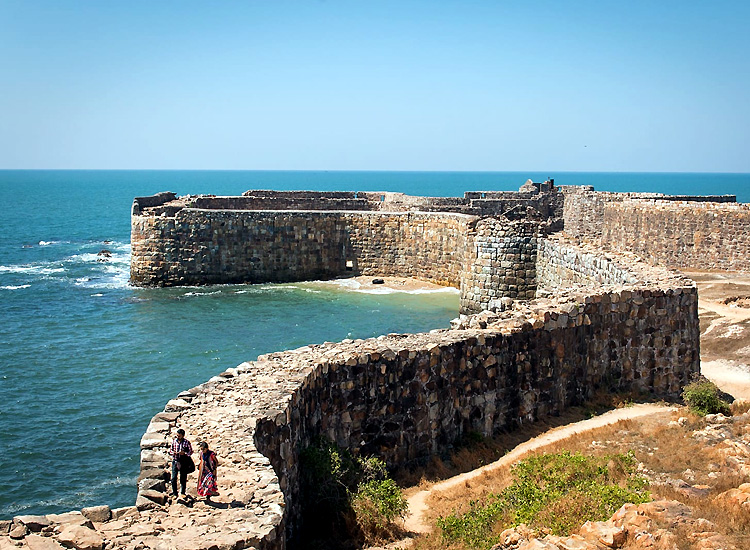 While the heritage of Maharashtra is quite vast, forts have a special place among the must visit attractions. Sindhudurg Fort is set on an islet in the Arabian Sea, just off the coast of Maharashtra. One of the mighty structures of the Maratha Empire, Sindhudurg was constructed by Chattrapati Shivaji Maharaj.

The 17th century fortress was built as defence against rising influence of foreign colonizers such as the English, Dutch, French and Portuguese along with enemies within in the country. It till date remains unbreachable. Spread over 48 acres, Sindhudurg offers scenic views in addition of the feel of the olden days of glory. 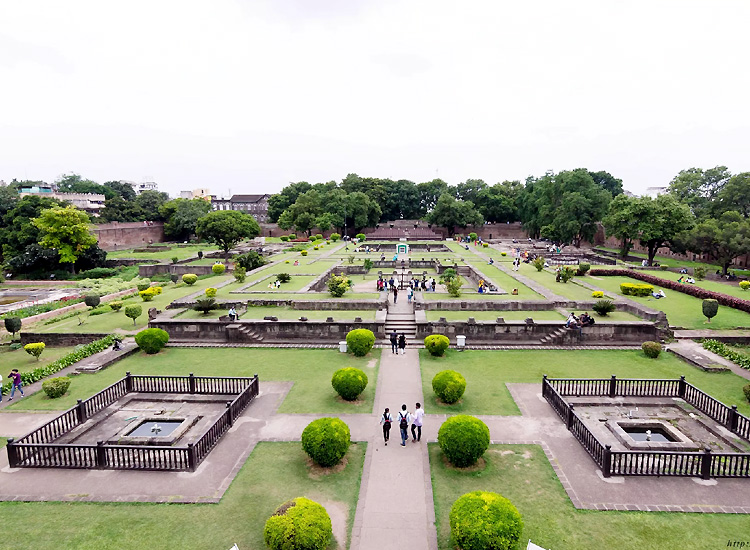 Moving on, next on our list is one of the most glorious historical monuments in Maharashtra is the Shaniwar Wada in Pune. The 18th-century fortress was more of a city and was the seat of the Peshwa of the Maratha Empire, the prime ministers of the celebrated dynasty.

Though much of its heritage is lost in an unexplained fire, what remains is truly glorious. The 18th century fortress complex was an architectural wonder with impressive treasures. Also, the complex is said to be haunted and only adds to the thrill of exploring. Marvel at the splendid structures, gates, halls, fountain and more that survived destruction. You can also make your trip memorable by staying at Fort Jadhavgarh, one of the best heritage hotels in Maharashtra. 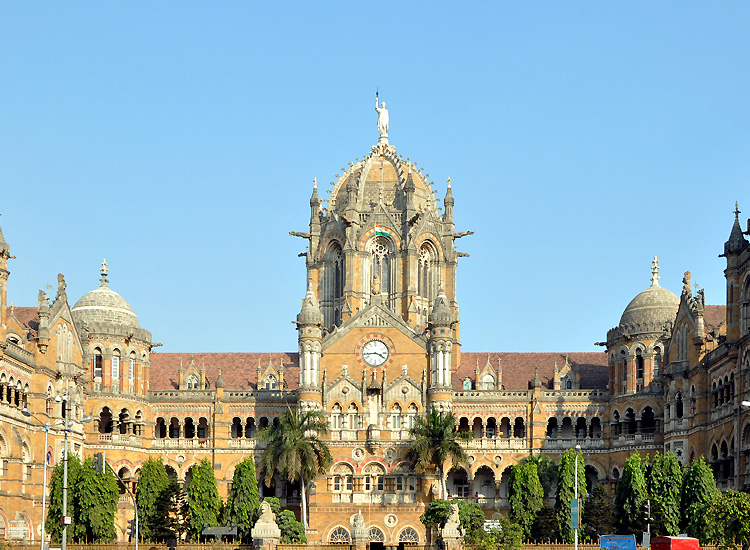 The 18th century building is a mix of craftsmanship of British architects and Indian artisans. Embark upon a guided heritage walks observing the fascinating turrets, pointed arches, wood carvings, balustrades, ornamental brass, inscriptions and iron works. In the premises, you can also check out a museum. Maintained by Central Railways, here you can marvel at the display of model trains, coaches, equipments and more from the classic era of Railways in India. 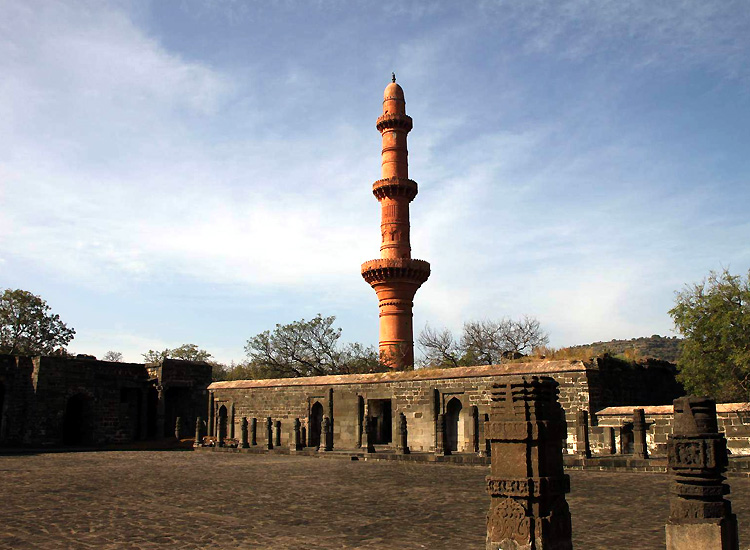 Featuring on our list of the best monuments of Maharashtra dating to historical times is the Chand Minar at Daulatabad. One of the eight tallest towers in India, this one is special as it named as the ‘Tower of the Moon’.

The fine specimen of Persian architecture dates back to the 15th century. It was built as a mark of celebration of capture of the Daulatabad Fort by the King Ala-ud-din Bahmani. The 30-metre high tower has 4 storeys and 24 chambers with a small mosque at the base. Marvel at the outstanding parts of indigenous Indian architectural features and also the Persian blue tiles. 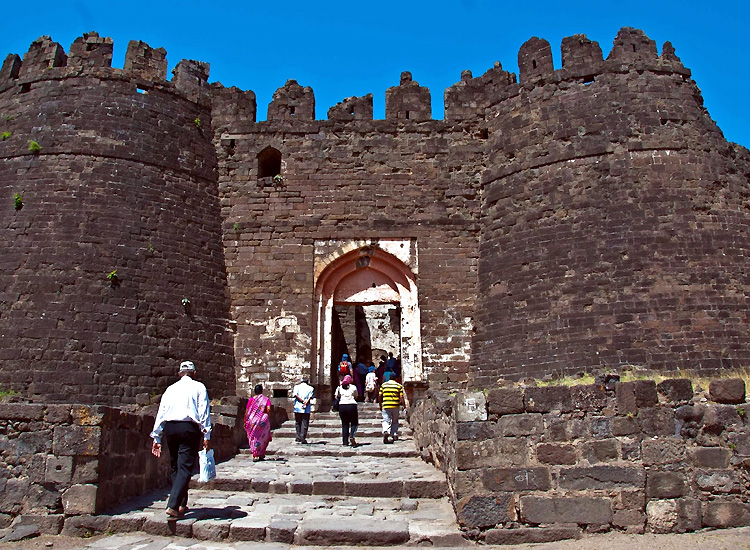 Lost in the turning wheel of time, Daulatabad Fort also known as Devgiri in the olden days is one of the charming historical monuments in Maharashtra. The fort dates back between the 12th to the 14th centuries. Heavily guarded and almost impregnable, the architectural marvel is listed among the mighty hill forts in Maharashtra.

Three level of fortifications surround the fort and there are many other important attractions from previous era. Take a look at the royal durbar, court, halls and the defence measures, especially the canons. Walk around the crumbling pieces of history and feel transported back to the olden days. 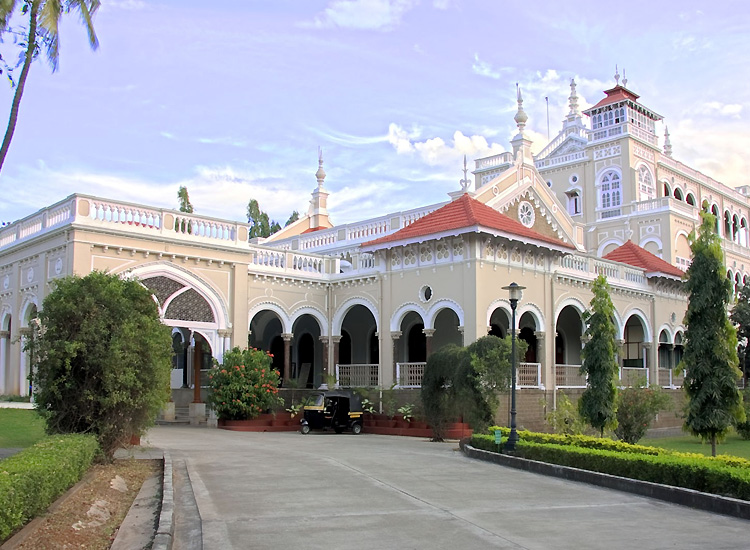 One of the important landmarks in Indian history, Aga Khan Palace is among the must-visit historical monuments in Maharashtra. The 19th century palace was built by the Sultan to help the poor with employment in the time of famine. The majestic building also played an important role in Indian history. It served the cause of Indian freedom struggle.

Later, the royal family donated the palace and it was transformed into a Gandhi Smarak. The charming architecture style is impressive as are the laid out gardens and parks. In fact, this is one of the most visited tourist places in Pune. 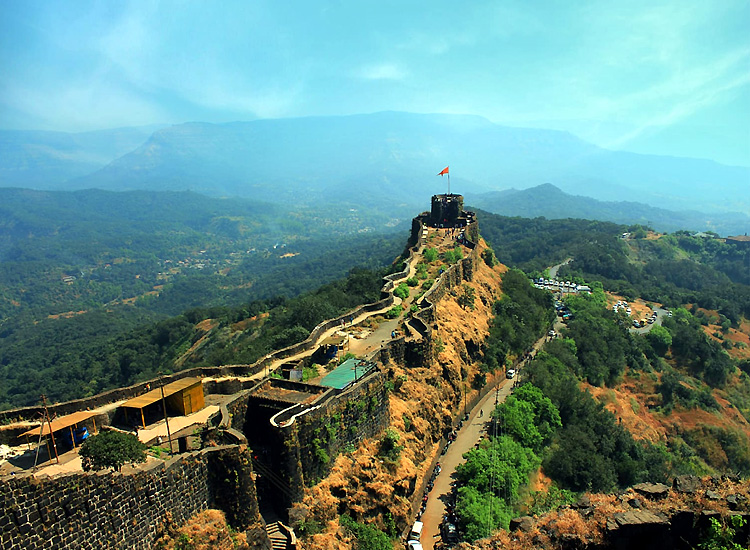 Maharashtra has a vast legacy of hill forts and Pratapgad Fort in Satara is one of the most prized treasures. Built in the 17th century in the rule of the Chattrapati Shivaji Maharaj, the mighty fortress is sprawled over lush Western Ghats serving as defence against enemies.

Also known as Valour Fort, it is an important landmark in Maharashtra. It was the site of the legendary Battle of Pratapgad. A visit to the fortress is not just a tryst with nature but also a dose of adventure. Hike the challenging 450 steps from the base village to the very top of the fort re-living the olden diyas and basking in natural bliss. 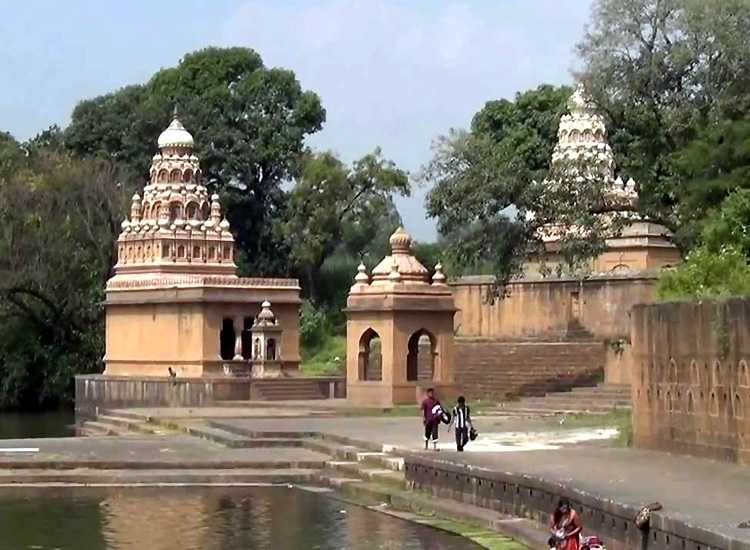 Historic and beautiful, Wai is one of the famous places in Maharashtra. Legendarily known as “Dakshin Kashi”, the holy city is settled on the banks of the Krishna River. The temples in the town are said to bless pilgrims with spiritual peace. The “Dholya Ganapati” temple on the “Ganapati Ghat” is the most-visited attraction.

The ‘town of temples’ just like the holy Kashi is known for the various river ghats. The steps leading down the river are used to take dip in the sacred waters. The historic ambiance is the main lure besides the ghats and temples of Wai. 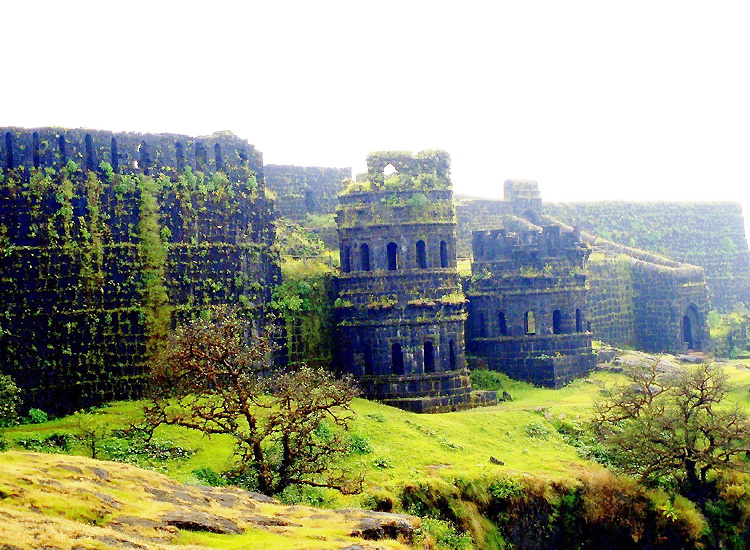 Next on our list is the very place that has been the birthplace of many legends of valour of Chattrapati in Maharashtra. The capital of the Marathas during the rule of the Shivaji Maharaj is not just a historic monument, rather a treasure where one can relive the olden days of glory.

Positioned amid the lush Sahyadri Ghats, the fortress is an icon among heritage sites in Maharashtra. Experience the olden tales of the Maratha Empire in addition of the scenic beauty. The unmissable sites of Raigad include wall named Hirakani Buruj over a huge cliff, Nagarkhana Darwaja, Rani Vasa, Palkhi Darwaja, Mena Darwaja, etc.

One thought on “Popular Historical Monuments in Maharashtra”