India is a vast, overwhelming variety of landscapes, cultures, languages, cuisines, and World Heritage Sites. The country has a total of 35 world heritage sites that have been recognized by UNESCO, however there are many other heritage sites which very few actually know about. The lesser-known heritage sites are treasures waiting to be explored. Offbeat and away from crowds, you can enjoy a feel of history, culture and architecture.

Here are some of the lesser known heritage sites in India no one told you about: 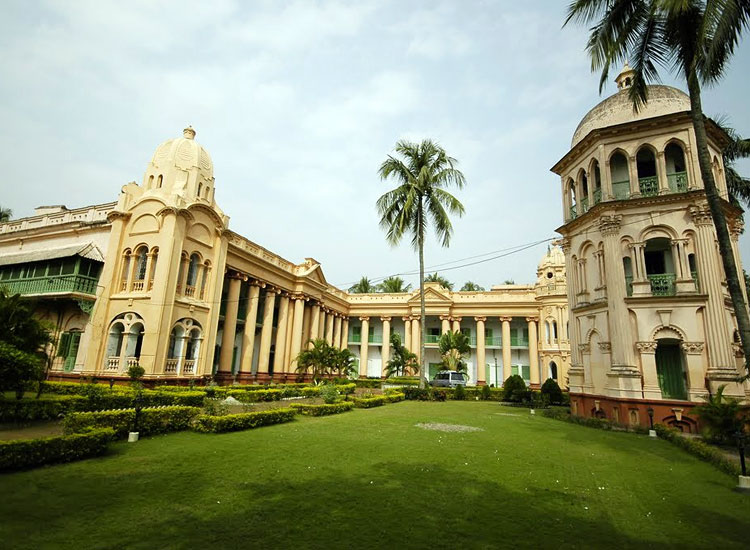 West Bengal has a rich architectural legacy, and one of the lesser-known heritage site in India, the Palaces of Dhanyakuria. Once a part of Sunderbans, the Dhanyakuria village was founded in the year 1742. Eight families of zamindars belonging to different castes settled here. They went on to create European palaces with a touch of Bengali and Vaishnavite style. These magnificent showpieces of fusion architecture, today are a beautiful memory of the yesteryears. Explore the Gayen Palace, the wonderful statues of Ballabh Place and the colorful frescoes.

Dhanyakuria is 43 km from the Kolkata. Choose to make a day trip to the village of palaces. 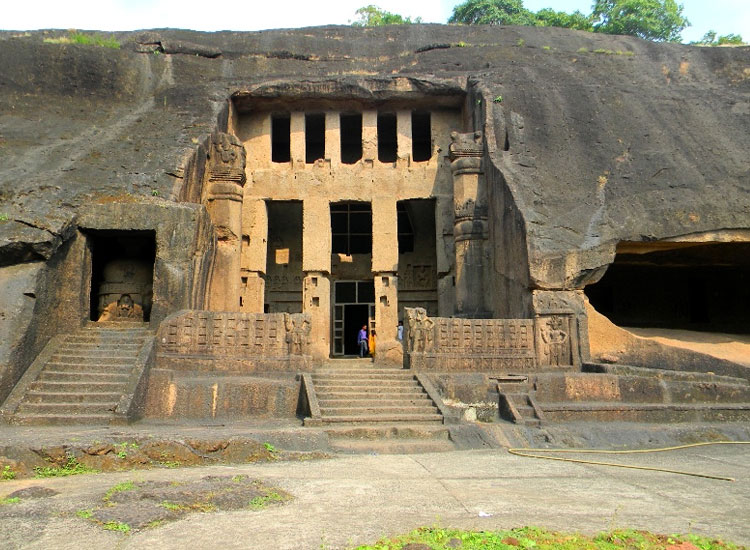 Kanheri caves in Mumbai bring us to our next lesser-known heritage site in India. The Kanheri rock-cut caves date to the period of 2nd century to the 9th century, built during the reign of the Mauryan and the Kushana emperors. Originally the caves were a place of rest for the travelers on the way of Sopara-Kalyan, but were turned into Buddhist Viharas for residential and meditation purposes. These caves though ravaged by time intricately carved Buddhist sculptures, reliefs, pillars and rock-cut stupas. The Avalokiteshwara is the most distinctive figure to visit.

The caves are located in Sanjay Gandhi National Park, Borivali, 40 kilometers from Mumbai. You can easily go for a day trip.

Sri Thyagarajaswamy Temple at Thiruvarur in Tamil Nadu is one of the heritage sites in India which has not yet gotten its due. The ancient temple is revered by many people. The lesser known heritage site inside the temple complex is, the magnificent murals of late Nayak period on the ceiling of Devasiriya Mandapam. The 17th century murals depicting the story of the monkey faced Chola King Muchukunda who is said to have brought the Lord Thyagaraja from Heaven to Tiruvarur. The murals have been freshly restored. The beautiful art express a distinctive cultural and philosophical vision.

Thiruvarur is easily accessible from Chennai and Trichy. You can arrive by air to Chennai and by train to the ancient temple town. 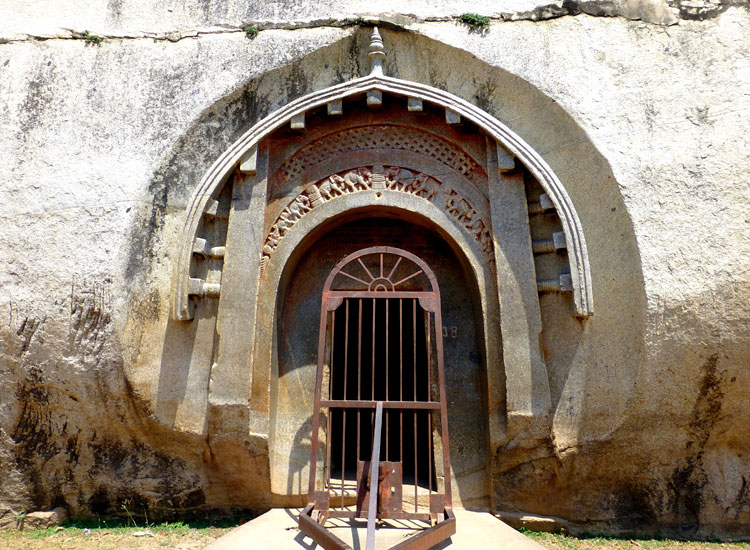 The Barabar Caves in Bihar, the oldest examples of Mauryan rock-cut architecture in India is one of lesser-known heritage sites in India. There are four caves in Barabar dating back to reign of Asoka (273-232 BC). These caves were used by the Ajeevika sect. Also present at the site are several rock-cut Buddhist and Hindu sculptures. The four caves are Karan Chaupar, Lomas Rishi, Sudama and Vishva Zopria. The caves are intriguing, whose granite walls were polished to a mirror-like effect and with a fascinating echo effect. Experience the unsolved mysteries of history.

Barabar caves can be easily reached in a rented vehicle or taxi from Gaya. The closest airport and railway station are both in Gaya city. 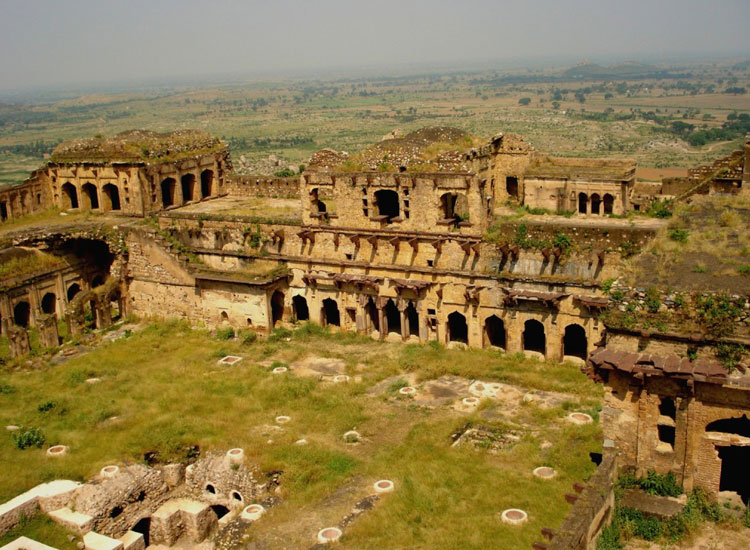 Madhya Pradesh has many offbeat heritage treasures in India. The 12th century Garh Kundar was is a lesser-known cousin of the Orccha. The magnificent fort stands proud, and tells tales of a grandeur long gone, battles, massacres, jauhar, and betrayal. The abandoned fort has myriad incredible sights, which though ravaged by time have a mesmeric charm. The magnificent pillars dedicated to the sun and the moon, awe-inspiring temples inside dedicated the Goddess Gajanan Maa and another to Giddha Vahini. The palace inside is a crumbling structure, but a beautiful memory of the olden days.

Garh Kundar is easy to access by road from Orchha and Jhansi. It is an excellent day trip from either. Make sure you carry water and food if you are planning to explore, there is no tourist facilities nearby.

Explore the History of Madhya Pradesh with these Heritage Hotels 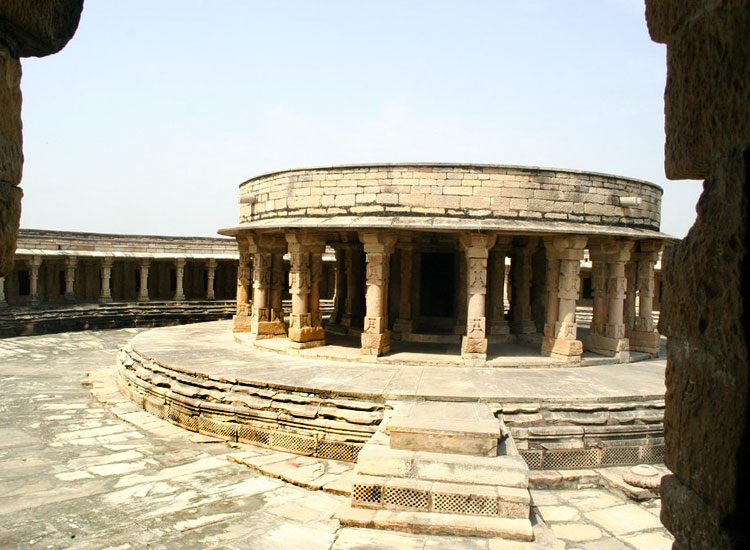 Another of Madhya Pradesh’s heritage treasures, the Mitawali Temple in Morena is one of the impressive yet lesser-known heritage sites in India. Built in the 8th century, dedicated to 64 yoginis (tantric goddesses), the temple complex is a treasure of architecture.

The yogini sculptures are life-like, a classical specimen of sculpting skills of the yesteryears. Many structures have succumbed to the ravages of time but are intriguing. The unique fact about the temple is that its magnificent architecture is said to have been the basis for Lutyen-Baker’s design of the Indian Parliament building.

Easy to reach by road from Gwalior, Mitawali, as well as the rest of the structures around it. 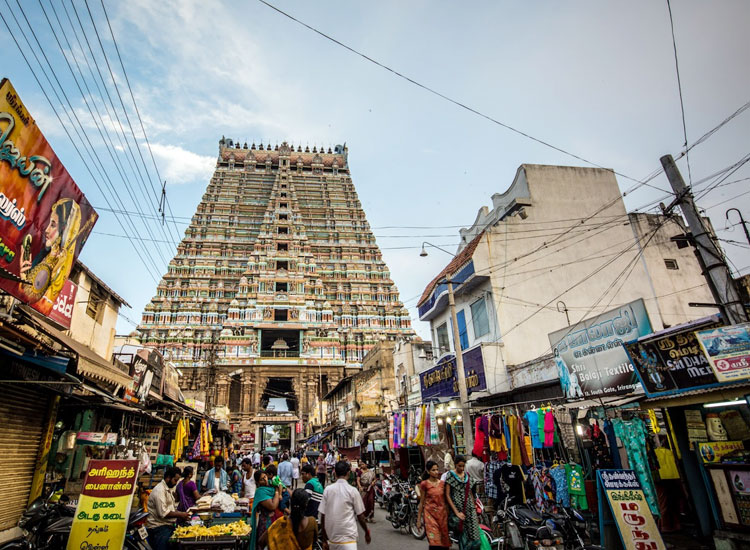 The Ranganathaswamy Temple, Srirangam is one of the most illustrious Vaishnav temples in the country. It is also one of the hidden heritage sites India is blessed with.  The temple is dedicated to Ranganatha, a reclining form of Hindu deity, Lord Vishnu. Constructed in the Dravidian style of architecture, the massive temple complex is spread over 156 acres. According to some scholars, this makes Sri Ranganathaswamy Temple the largest functioning temple in the world and is often found ranked amongst the largest religious complexes of the world.

Tiruchirapalli Junction is the closest Railway station, while Trichy airport is the nearest air connection. 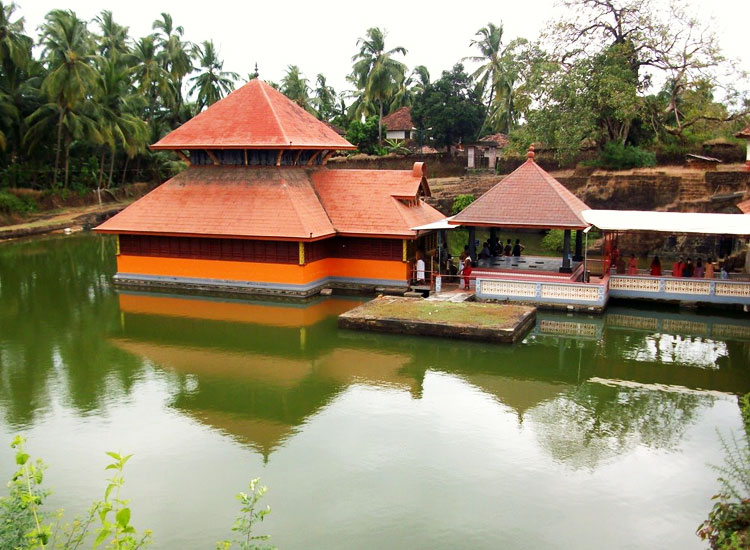 Ananthapura Lake Temple is a Hindu temple located in Kasaragod District of Kerala. Dedicated to the Lord Ananthapadmanabha Swamy (Lord Vishnu), this temple is another impressive yet lesser-known heritage site in India. The uniqueness of the temple comes from the fact that, this is the only lake temple in Kerala and what it makes all the more interesting is that is guarded by a divine crocodile. The crocodile Babia is vegetarian and is fed the parsad (food) of the deity. The temple built in typical Kerala architecture is one of the remarkable temple complexes in India.

Plan your stay at heritage hotels of Kerala.

Well connected by air, rail and road, the closest air terminal is Kozhikode International airport and the nearest railway station is Kasaragod. 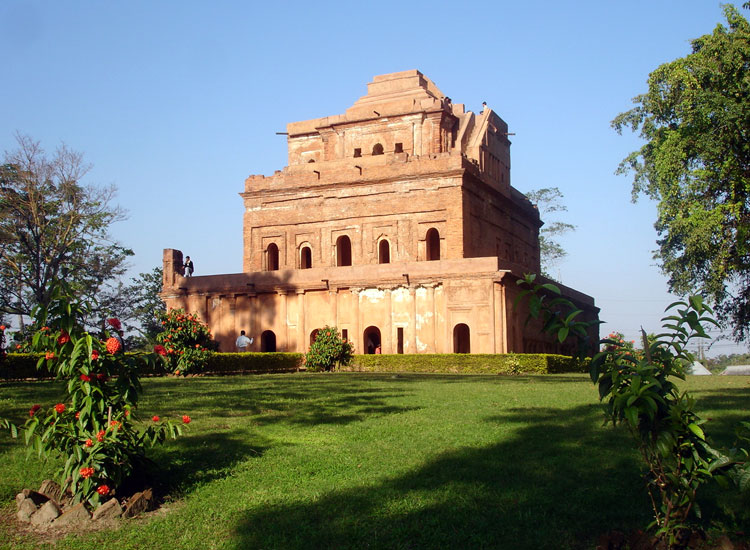 One of the finest heritage sites in the North East, Kareng Ghar Assam is one of the lesser-known heritage sites in India. Royal palace of Kareng Ghar is one of the grandest examples of Ahom architecture in India. Made of wood and stones in Sivasagar, it was the principal seat of the Ahom Kingdom for more than 4 centuries. The magnificent 7-storey palace lies in ruins but its charm is not lost. There are stories stating, that a secret underground tunnel from Kareng Ghar connects to ‘Talatal Ghar’ in Rangpur many kilometers away across the Dikhow River.

It is just 30 minutes’ drive from Sivasagar town in Assam. The nearest airport and railway station is in Guwahati. 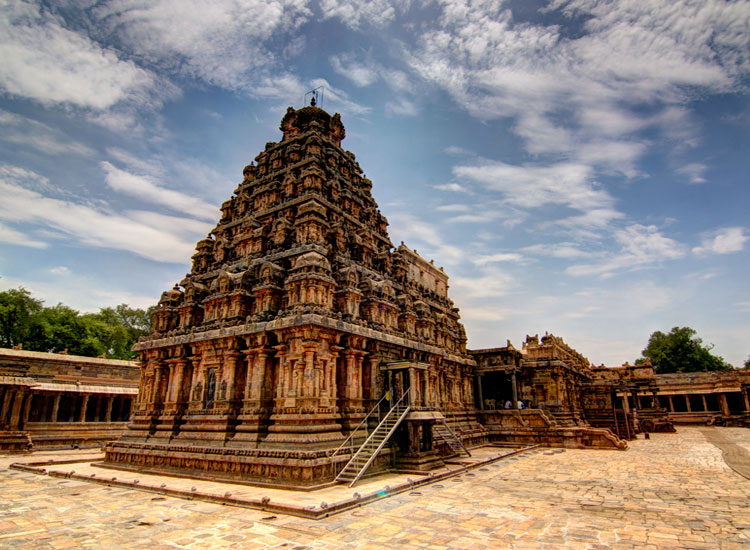 The smallest of the Great Living Chola Temples; the Airavatesvara temple in Darasuram is one of the UNESCO heritage sites in India. Built in the 12th century CE, the temple is dedicated to Lord Shiva‘s Airavatesvara form, the divine elephant. The temple complex is one of the finest specimens of Dravidian architecture dating to the times of the Chola Empire. The unique temple design is recognized as nitya-vinoda, ‘perpetual entertainment in mind’. Inscriptions, artistic sculptures, Chola traditions and miniature frescoes inspired from Ramayana, Periya Puranam and other mythological stories makes it a sight one must not miss.

The temple is located 3 kilometers from Kumbakonam. Nearest airport is Trichy and the closest railway station is in Kumbakonam. 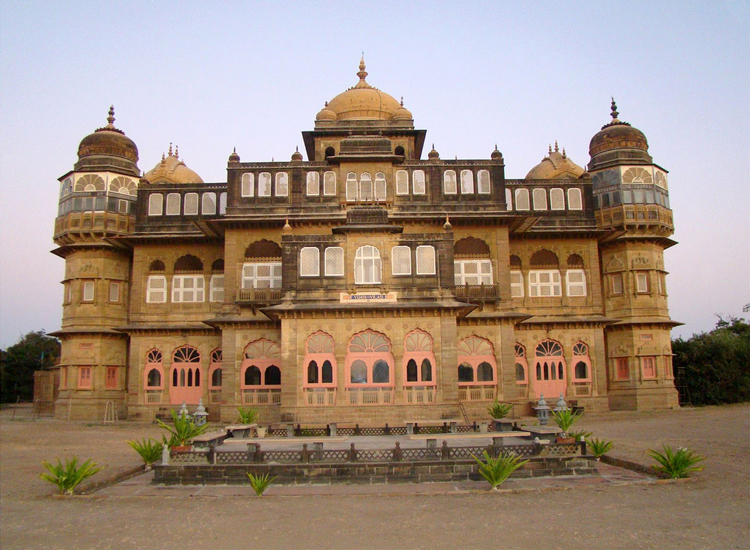 Gujarat has a treasure of heritage sites and Gondal is one of them. The palaces in Gondal are visually exciting palaces and living spaces. It was ruled by Jadeja Rajput clan from Thakur Shri Kumboji in the 1600s. His Highness Thakore Shri Sagramji introduced economic and social reforms and made Gondal one of the most developed regions of the country. In today’s date Navlakha Palace Orchard Palace and Riverside Palace are the beautiful relics of the days. These places have been turned into heritage hotels and offer guest the first-hand experiences of the olden days.

Gondal is easily accessible from Rajkot. Rajkot offers air, rail and road connections from all over India. 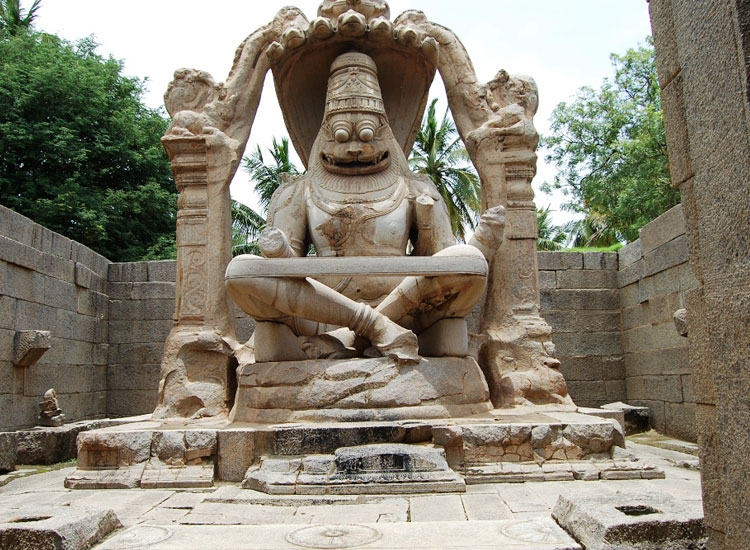 The limelight of heritage attractions in Karnataka is taken mostly by Mysore but the lesser-known heritage treasure lies in Srirangapatna Town. Located in Mandya district of Karnataka in the course of River Cauvery, the historical town of Karnataka offers offbeat treasures. The town gained prominence during the reign of Hyder Ali and his son Tipu Sultan. The town has witnessed bloody wars, the siege on the town and the death of the fierce warrior Tipu Sultan.

Srirangapatna is situated 20 km before Mysore on Bangalore-Mysore Highway. The closest city is Mysore with all modes of communication. 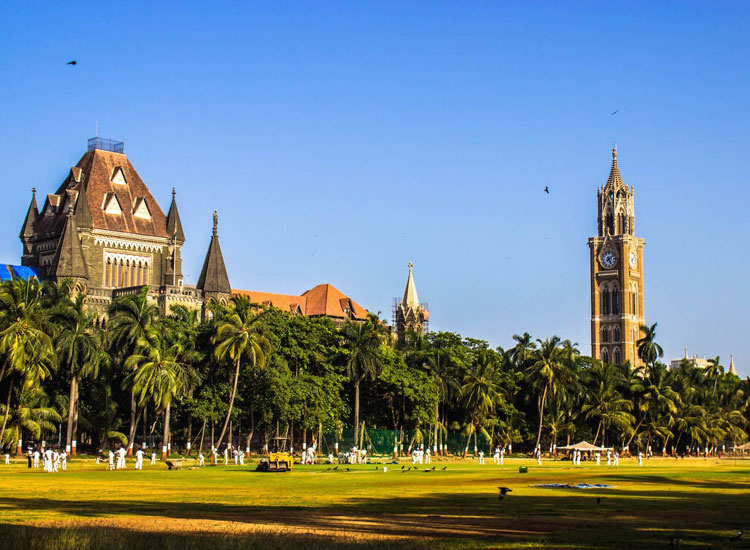 Rajabai Clock Tower is one of the most famous monuments in Mumbai, located in the campus of the University of Mumbai. The tower stands at a height of 280 ft and is ranked as one of the tallest clock tower in India. The tower was designed by an eminent architect, George Gilbert, who also modelled the Big Ben. Completed in the year 1878, the tower is an incredible specimen of blend of Venetian and Gothic styles of architecture. The clock tower also houses the University Library and is one of the amazing lesser-known heritage sites in India.

Mumbai is well-connected by air, rail and road. Mumbai has both domestic and international flights connections. 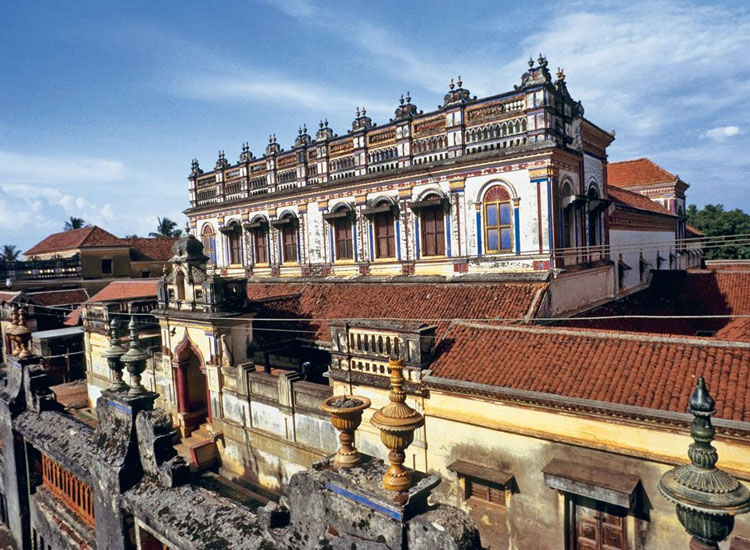 Chettinad mansions are palatial homes belonging to the Chettiar community of Tamil Nadu. Between the period 1850s to 1930s, Chettiars thrived in luxuries and built extravagant houses, using material shipped from every corner of the globe. The lavish homes had a mix of ethnic Tamil and Western features adhering to the traditional architectural science of Vastu Shastra. Though the opulent days have passed, these homes remind of the olden days. Visalam, Bangala, Saratha Vilas, are some of the Chettinad mansions one can visit and stay in.

These lesser-known heritage sites offer a wonderful experience to escape the hustle-bustle of life and step back into history.

Sivasagar distract in Tamil Nadu hosts the Chettinad mansion. The nearest airport is Madurai and Karaikudi is the closest railway station. You can easily drive from Chennai, capital city of Tamil Nadu.

One thought on “Lesser-known Heritage Sites in India”