10 of the Most Famous Monasteries in India

Here are 10 of the most famous monasteries in India: 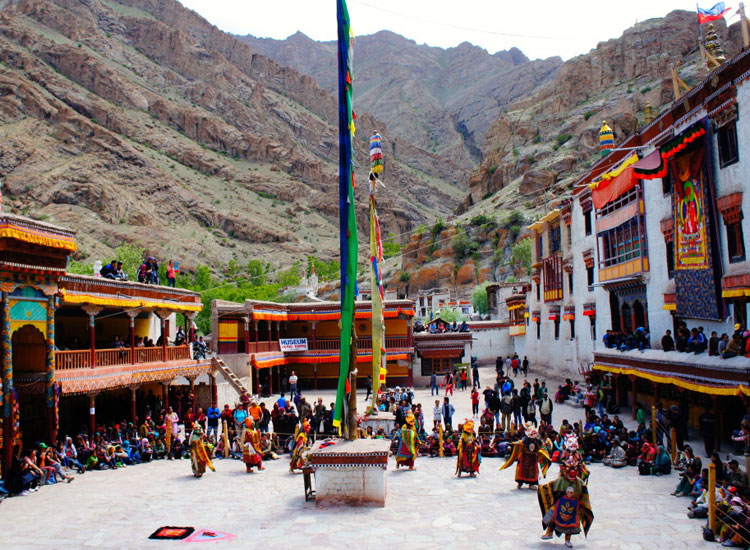 The largest, wealthiest and the most popular monastery of Ladakh, Hemis monastery is located at a distance of 40 km south-eastwards of Leh. The headquarters of all the Ladakhi monasteries, and of the Red Hat Drukpa order, this monastery was built in 1672 AD under the reign of Ladakhi Ruler Singge Namgyal. This mammoth structure had the patronage of the royal family of the region.

It is also the site where young Lamas get training for royal monasteries. Today, this gompa is under the aegis of the Drukpa sect of Buddhism. As you enter the monastery, notice the wonderful statue of Lord Buddha, paintings and stupas that have gold plating.

Every year, Hemis monastery plays host to one of Ladakh’s most famous festivals, Hemis festival, which is also called Hemis Tsechu. A state holiday, this one-day event has holy masked dance performance by the local resident Lamas for commemorating. It is the birth anniversary of Guru Padmasambhava. 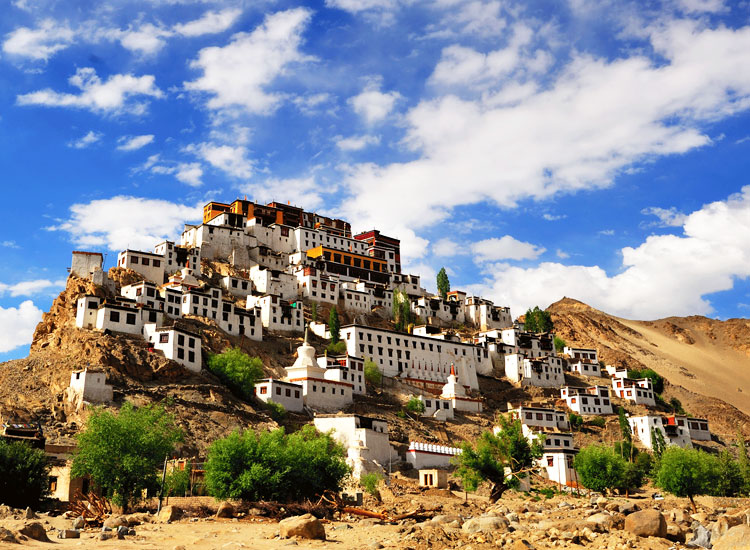 Around 19 km eastwards of Leh, Thiksey Monastery is the largest monastery of Ladakh’s central region. The monastery complex, belongs to the Yellow Hat sect of Buddhism and is a replica of the Potala Palace in Lhasa with influence from Ladakhi architecture. Lying atop a hill on the banks of Indus River, this 12-storey structure was built by the nephew of Sherb Zangpo, Paldan Sherab in1430 AD.

Along with a nunnery, the complex also has several Buddhist displays including stupa models, swords, Thangka paintings and statues. The complex was built for commemoration of the visit of 14th Lama. The star attraction here is 49 feet high statue of Maitreya Buddha (the future Lord Buddha) inside a temple, constructed in 1970. Teachings of Buddha are engraved on the pillars.

Along with a number of other shrines, there is also the temple of Goddess Dorje Chenmo, Lakhang Nyerma. Every year, from 17th to 19th day of the 9th month of the Tibetan Calendar, the very popular Gustor Festival is organized at this Gompa, marked by a sacred masked dance. 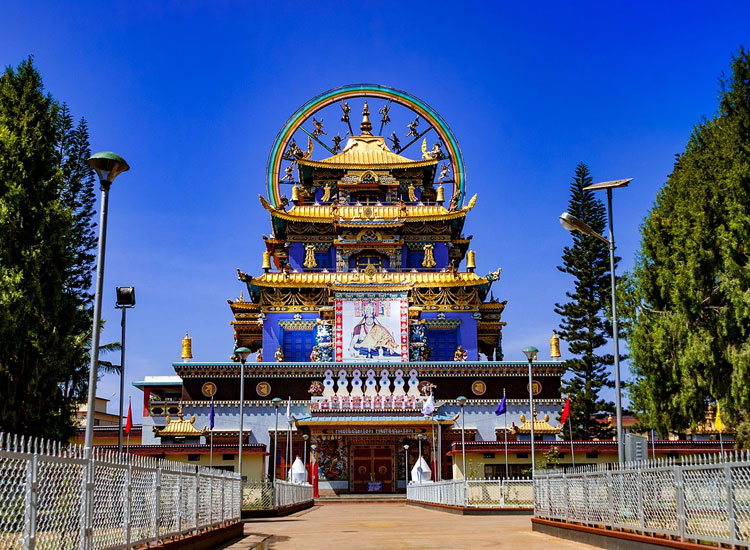 Located at a remote place of Karnataka, Bylakuppe, Namdroling monastery was founded by His Holiness Pema Norbu Rinpoche and is known for being a center of Buddhist learning. After coming to India from Tibet, he founded this monastery with just INR 300 in his hands. The 3rd Rago Choktrul Rinpoche, the 5th Karma Kuchen Rinpoche, and the 3rd Choktrul Rinpoche received training at this Gompa. Today, this place houses over 500 lamas from all around the world.

Most of the disciples here belong to the Palyul tradition of the lamas, nevertheless there also are students from other traditions Minling Dungse Sakyong (Mipham Rinpoche), and Minling Khenchen Rinpoche who come and study at this Gompa. The students not only gain spiritual and religious knowledge, but also learn about logic, philosophy and debate at the Ngagyur Nyingma University, founded with the complex of the monastery.

Every year, on the eve of Tibetan New Year, lamas and tourists from all around the world come to the monastery to be a part of the festivities, which go on for a couple of weeks. The highlights of this celebration are lama dances, formal processions, and a number of traditional events. 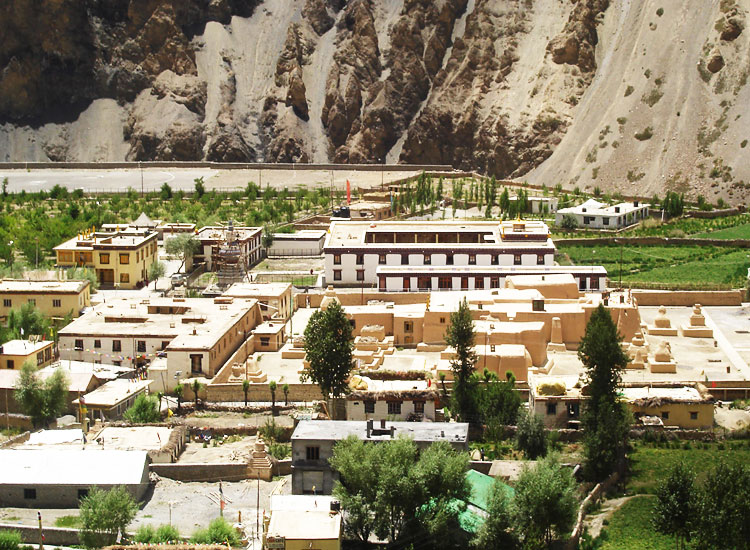 Located in the Tabo Village, Tabo Monastery, also known as the Tabo Chos-Khor Monastery was founded way back in 996 A.D., which was the Year of the Fire Ape by the Tibetan Calendar. The Gompa lies on the snow-covered cold barren desert amid the Tabo Valley at an altitude of 3050 m. A complete heaven, this sacred site is a preserver of traditions, culture and heritage of Buddhism from around centuries.

Also given the epithet of the ‘Ajanta of the Himalayas’, this complex also houses an invaluable collection of Thangka paintings, manuscripts, frescoes, statues in stuccos, and several murals, showcasing stories of the Mahayana Buddhist Pantheon. The paintings adorning the walls have been preserved in a wonderful manner and look brilliant.

The Tabo monastery temple preserves a priceless collection of manuscripts and thangkas (Buddhist scroll paintings), beautiful statues in stuccos, frescos and murals illustrating tales from the Mahayana Buddhist Pantheon. Every inch of wall is covered with fine paintings in well-preserved condition. This gompa is a national treasure and is protected by the Archaeological Survey of India. 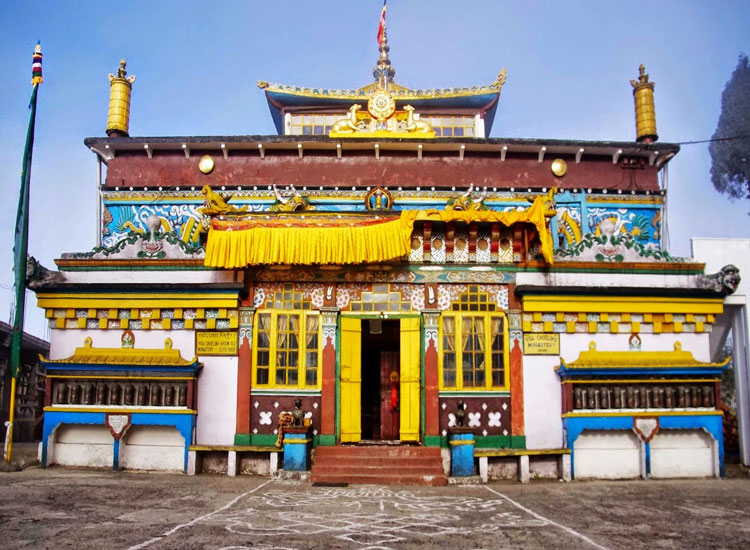 Around 8 km from the city center of Darjeeling, the Yiga Choeling Monastery is popular known as Ghoom Monastery and lies at an elevation of 8000 feet. One of the most popular monasteries in India, it is easily accessible from the Ghoom Railway Station. One of the oldest monasteries of the region, it was constructed in 1850 by Lama Sharap Gyatso. The in-house library houses some interesting books along with an invaluable collection of some ancient Buddhist scriptures. This gompa is also an important center of learning.

The main attraction here is the huge statue of Lord Buddha, with a height of 15 feet. Made up of pure gold, this statue is adorned by precious stones. In the its front, 2 huge oil lamps are lit all throughout the year. This statue is one of the oldest statues of the Lord in whole of Darjeeling.

The monastery is home to around 60 monks, and belongs the Yellow Hat sect of Buddhism, along with influence of Tibetan culture. There also are 2 special seats of His Holiness, The Dalai Lama and the head of incarnated Lama. 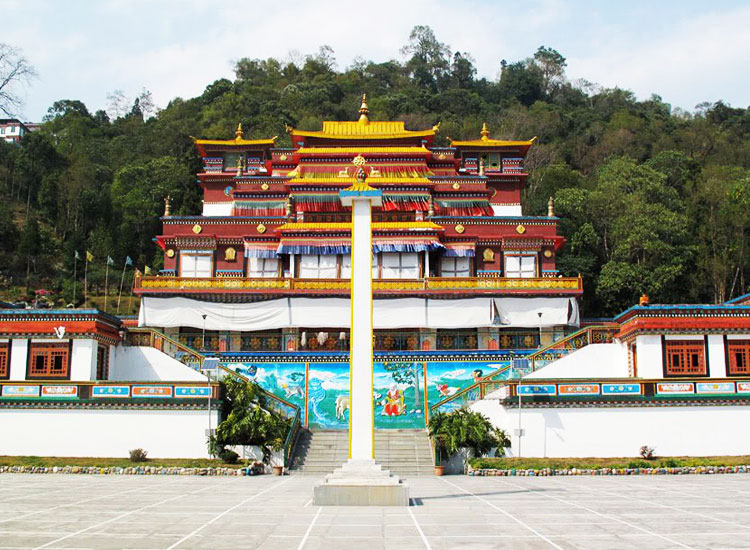 Around 3 km north-eastwards of the city, Enchy Gompa, belonging to the Nyingma order of Vajrayana Buddhism, is over 200 years old. Lying amid figurines of Tantric deities and stunning murals, the monastery arrives after passing by conifer trees. The site of this gompa has the blessings of Lama Drupthob Karpo, a popular champion of tantric art in Buddhism.

It is on the Gangtok- Nathu La road, and boasts of mesmerizing surroundings. The structure of the monastery that is seen today was built under the reign of Sidkeong Tulku (1909 1910). It is under the aegis of Buddhism’s Nyingma sect, and is the home of around 90 monks. Do not miss out on noticing the various religious objects displayed here along with the images of various Gods and Goddesses.

At this monastery, the three most important deities are Lord Buddha, Guru Padmasambhava, and Loketeswara. Every year, annual festival is organized on the 18th and 19th of the 12th lunar month of the Tibetan calendar, in the month of January/ February. Its highlight is the colorful and energetic Chaam masked dance, followed by special prayers.

[ Know about heritage hotels in Sikkim. ] 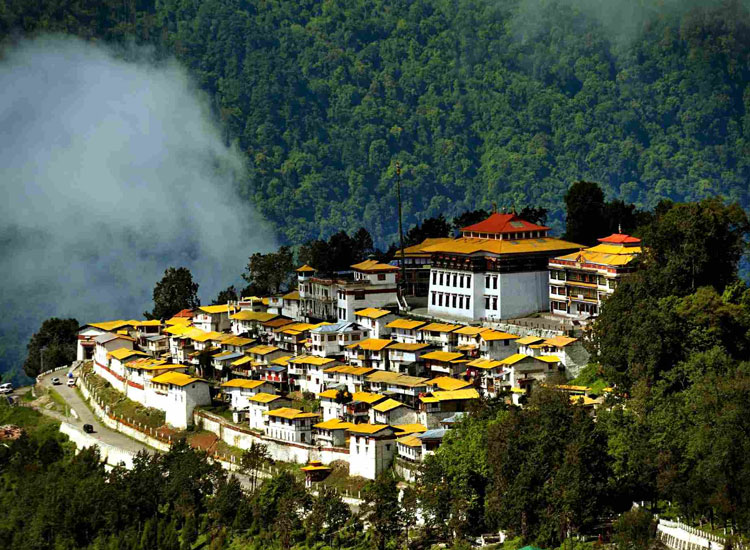 The crown of Buddhism in the state, also known as Galden Namgyal Lhatse, Tawang Monastery is largest monastery of India and the second largest in Asia. It was founded by Merak Lama Lodre Gyamtso in 1860-61 on the wish of the 5th Dalai Lama Nagwang Lobsang Gyatso. Thus, it is the core of Lamaistic faith of the Mahayana school of Buddhism in the north-eastern part of the country. The complex is placed at an altitude of 10,000 feet and offers stunning views of Tawang-Chu Valley.

Today the monastery is under the Gelugpa sect of Buddhism, and offers shelter to about 300 monks. It also heads 17 monasteries in the region. Popular annual celebrations include Losar Festival, the beginning of New Year and Torgya festival. The complex covers an area of 135 square meters and has 65 residential structures along with 10 other buildings.

The monastery complex comprises of a 16th century library or Par-Khang. There is also an assembly hall, called Dukhang. On the backside of the Gompa is the stone-slab court, which is the site of important religious events. The next is cooking room, Rhum Kyang. The other important structure here is the Centre for Buddhist Cultural Studies. 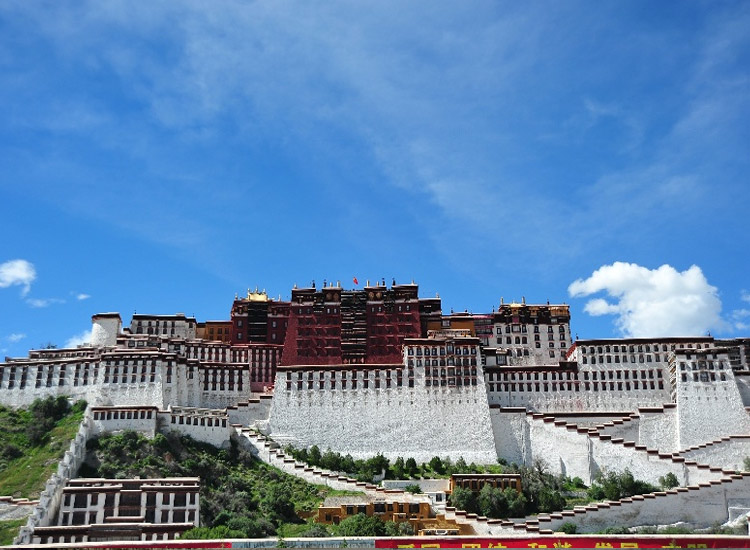 Founded himself by the third Dalai Lama, Namgyal Monastyery is one of the most famous monasteries in India as well as world. The monastery complex also has another monastery, several temples and a few learning institutions in its complex. For the betterment of Tiber, special prayers are conducted here every day. At the Gompa, around 150 students learn about religion, tantra and sutra.

It is the personal monastery of the 14th Dalai Lama. There is a passage in the interiors, which is only used by Dalai Lama and his disciples. It is also the largest Tibet temples outside Tibet. The relaxed and spiritual air here is simply infectious. Spot the wonderfully decorated prayer wheels.

The monastery lies amid green jungles of oaks, cedars and pines. A part of Tsuglag Khang, it is designed in Tibetan style of architecture. Offering the views of the Dhauladhar ranges, the complex also comprises of a book shop, a Tibetan museum, a library, and a cafeteria. 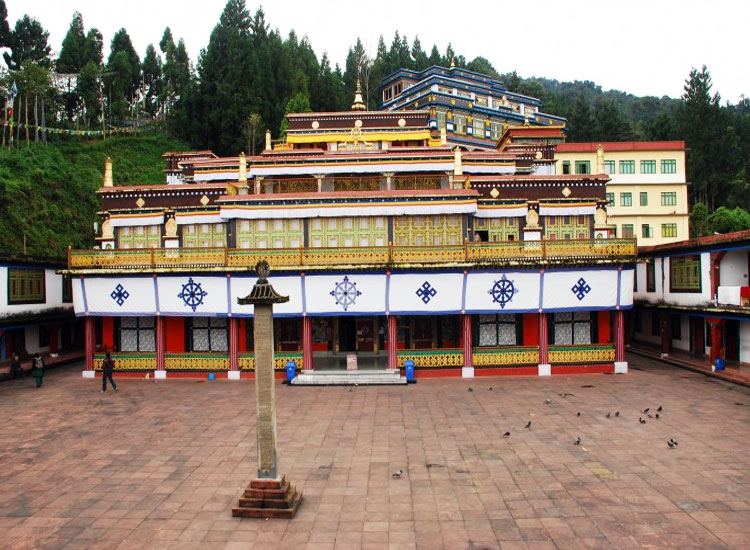 One of the largest monasteries in Sikkim, Rumtek Gompa is dedicated to the Kargyu sect of Buddhism, and finds its roots back to a 12th century in Tibet. This monastery is a replica of the original one in Tsurphu. This monastery was founded in 1960s by the 16th Karmapa, Gyalwa Karmapa. From the top, one can enjoy wonderful views of Gangtok town.

This 3-storey structure houses a number of wonders including Thangka paintings, rare Buddhist religious artwork, wall murals, 1001 miniature gold models of Lord Buddha and much more. It is also the center for Kargy teaching, popular all across the globe. There also is the Nalanda Institute of Higher Buddhist Studies with a huge painting of Buddha on one its walls.

There is a huge prayer hall in the ground floor of the monastery. Its walls are adorned with silk paintings, hand-painted life-size murals, statues, and Thangkas. The first floor is the residence of the 16th Karmapa. Around the courtyard, there are residencies for monks. It is around 24 km from the main town. 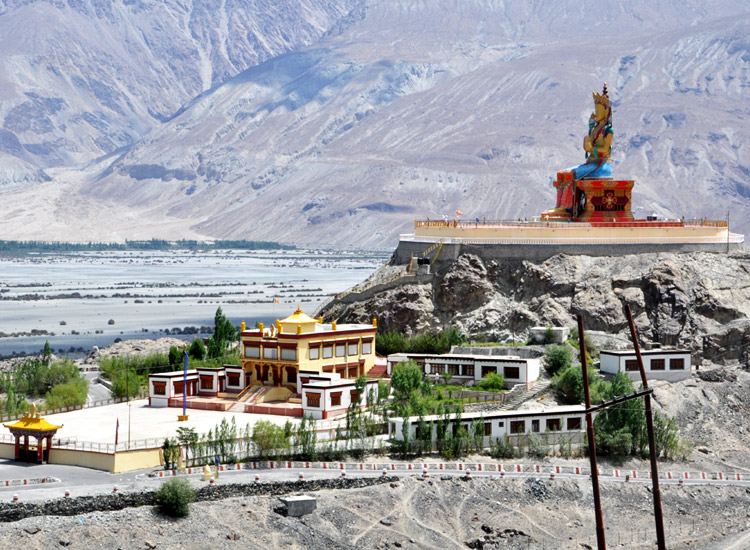 One of the largest and the oldest monasteries in Leh, Diskit Gompa was founded in the 14th century by Changzem Tserab Zangpo, who was a disciple of Tsongkhapa. It belongs to the Gelugpa sect, or the ‘Yellow Hat’ sect of Buddhism. With ceiling and wall paintings, the monastery looks like Tashilhunpo Gompa of Tibet. The complex also has a number of other shrines.

From the complex of the monastery, visitors can enjoy wonderful views of the Nubra Valley. The monastery’s structure is truly stunning, with the huge statue of the Jampa Buddha being the highlight. Positioned atop a hill, the statue is 32 m in height and was inaugurated by His Holiness Dalai Lama in 2010.

The most popular festival here is Dosmoche festival or the ‘Festival of Scapegoat’, which is celebrated in winter during the month of February. Mask dance is the major highlight here. This festival is celebrated by a huge number of people.

One thought on “10 of the Most Famous Monasteries in India”