Plan French Vacation with places to visit in Pondicherry

Pondicherry, one of the seven Union Territories of India is one of the charming holiday destinations in India with an incredible heritage. The former French colonial outpost in India is settled along the Bay of Bengal. Known as the French Riviera of the East, the pictorial town creates a vacation in France, that too in India. Old-world charm, scenic beaches, serene ashrams, charming lanes, delightful cafes, watersports, historical mansions & memorials, heritage hotels and more, a holiday in Pondicherry will be truly memorable.

Here are the best places to visit in Pondicherry that you must try on your French vacation in India: 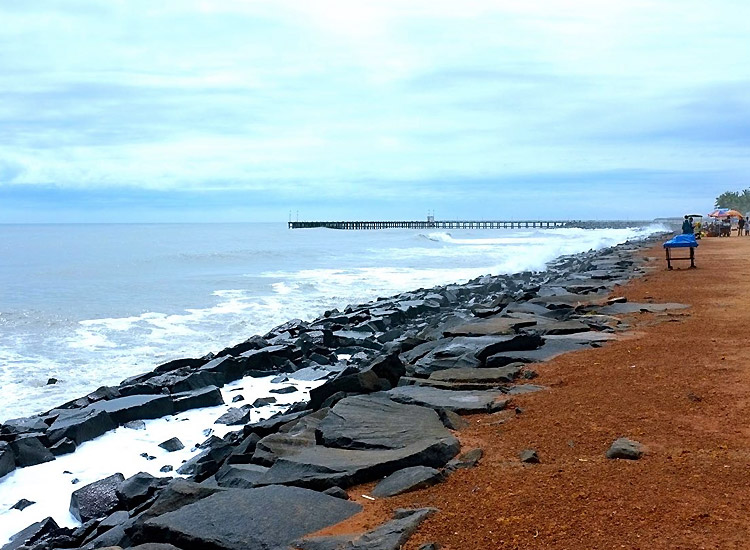 Pondicherry beach also known as Promenade Beach is one of the popular beaches in India. Settled along the Bay of Bengal, it is one of the best places to visit in Pondicherry. Almost 1.5 km long, the shoreline is known for landmarks like the French War Memorial, statues of Jeanne d’Arc Dupleix, Mahatma Gandhi, and a lighthouse.

Walk on the boulevard soaking in the views, sit on the rocks watching the waves play, and incredible. The beach is the perfect spot in morning and evenings. The entire stretch of the beach provides a glimpse into the heritage and beauty of Pondicherry. 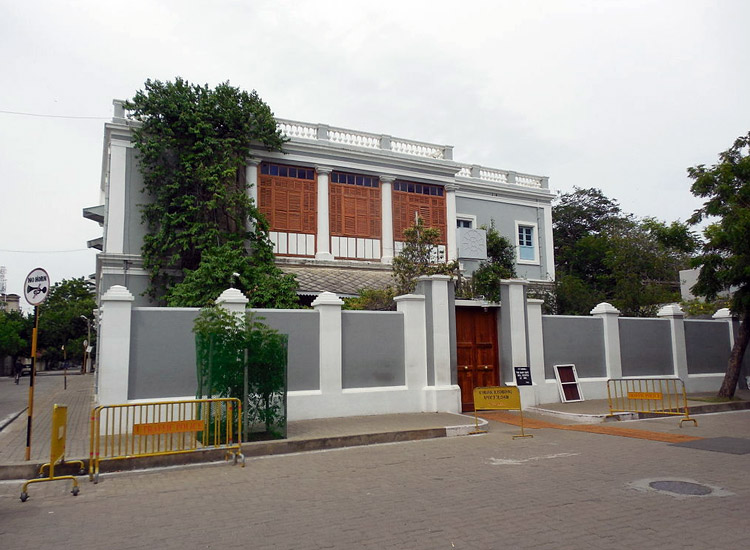 Based on the teachings of Sri Aurobindo and Mira Alfassa, the ashram provides a spiritual shelter to around 1,200 members along with 400 students. Pay a visit to the divine setting, with facilities of library, printing press, playground, art gallery, a dispensary/nursing home, dairy, farms and guest houses.

[Stay at these heritage hotels of Ponicherry.] 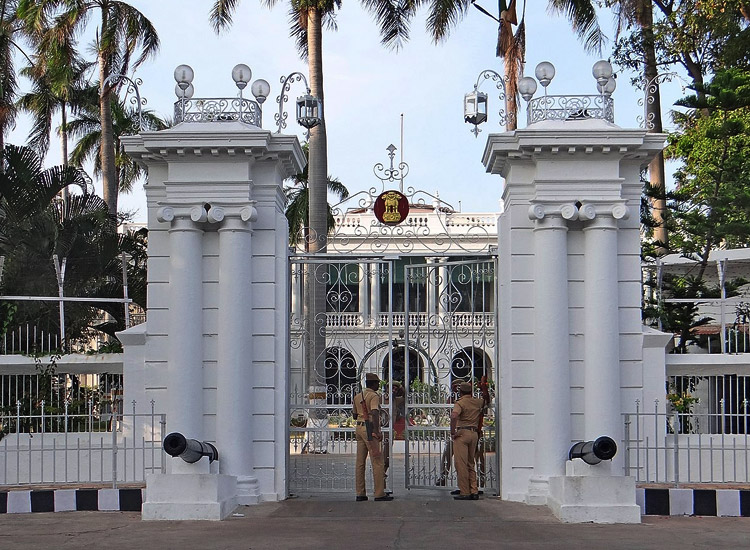 Raj Niwas is one of the must visit places in Pondicherry. The former palace and residence of the French Governor Dupleix, the building now serves as the official residence of the Lieutenant Governor of Puducherry.

Built during the 18th century French Revolution, it is well-known as the ‘Palais du Government’. Marvel at the blend of French and Indian architecture, the impressive water monument, well-maintained gardens, skillfully carved wooden pillars, decorated stonework of European design, inscriptions in Tamil and Latin, and the two canons positioned at the main gate. It is an impressive sight when lighted up in the evenings. 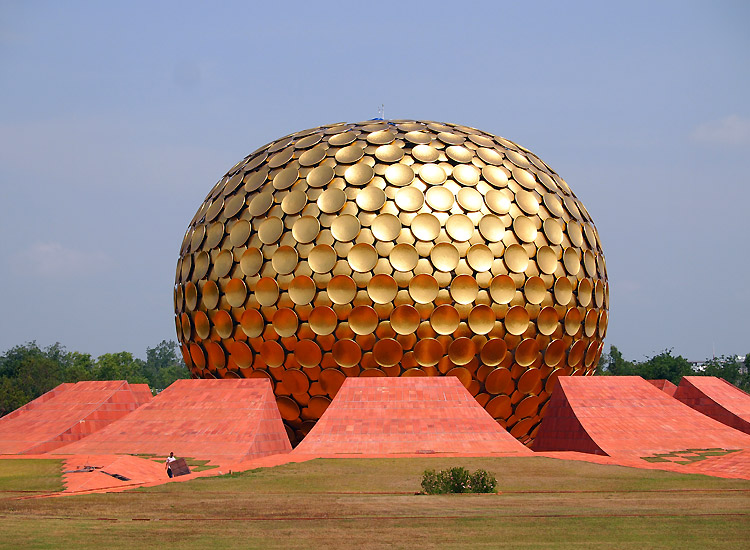 Auroville is one of the best tourist attractions in Pondicherry. Settled along the East Coast Road in Villupuram district of Tamil Nadu, the experimental township was designed by French architect Roger Anger and founded by Mirra Alfassa in 1968.

Meaning a universal town, Auroville was designed for people to live peacefully, irrespective of nationality, sex, color, caste and creed, creating human unity. On its inauguration, a lotus shaped urn comprising of soil from over 124 countries was placed within the grounds. Guided by the Auroville charter, one can come from anywhere in the world and live here peacefully, exploring scientific, educational, cultural and spiritual pursuits.

At the centre of the township is Matrimandir, Temple of the Divine Mother, designed in a 100ft high spherical structure with the lotus bud shaped foundation decorated by gold-encased discs. Serving as exquisite meditation chamber, it summarizes the sentiment of the entire community. Explore the twelve gardens, lakes and an amphitheater while basking in harmony. 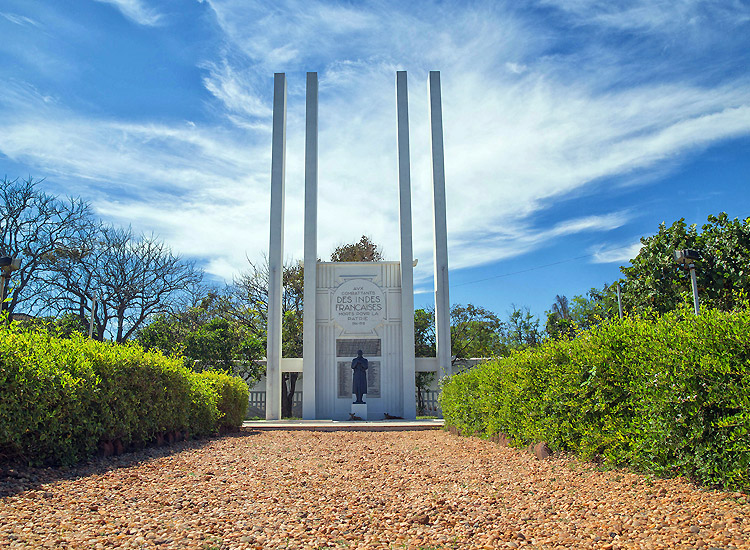 One of the historical landmarks in Pondicherry, French War Memorial is one of the places that you not miss. Located in French Quarter, on Goubert Avenue, the memorial dates to 197, built to honor the brave soldiers who laid down their lives during First World War.

Marvel at the four stark white columns surrounded by a small garden with a life-size statue of a soldier leaning on a rifle. There is an inscription of the memorial that says, ‘Aux combattants des Indes Francoises morts pour la patrie, 1914-1918’ which translates to ‘French fighters of India who died for their country in 1914-1918’. 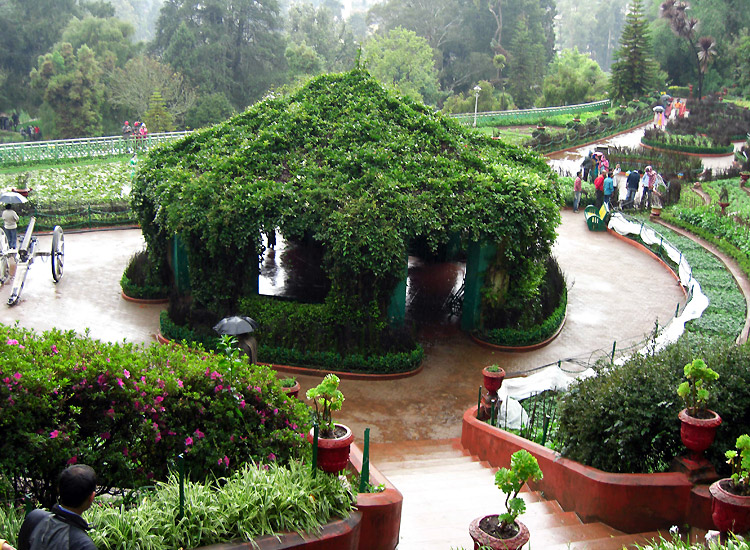 Moving on with our list, The Botanical Garden is one of the top attractions in Pondicherry. Established in 1826, the garden is spread over an area of 22 acres in the center of the city. The memorial of CS Perrotet is seen in the garden premises, who was responsible for the botanical garden and the adjoining aquarium.

The Botanical garden has 28 plots, each one has separate theme. Spend time exploring the green haven of pruned trees, flower beds, fountains, exotic plans from all over the world, Children’s toy train, musical fountain, aquarium and a Japanese rock. 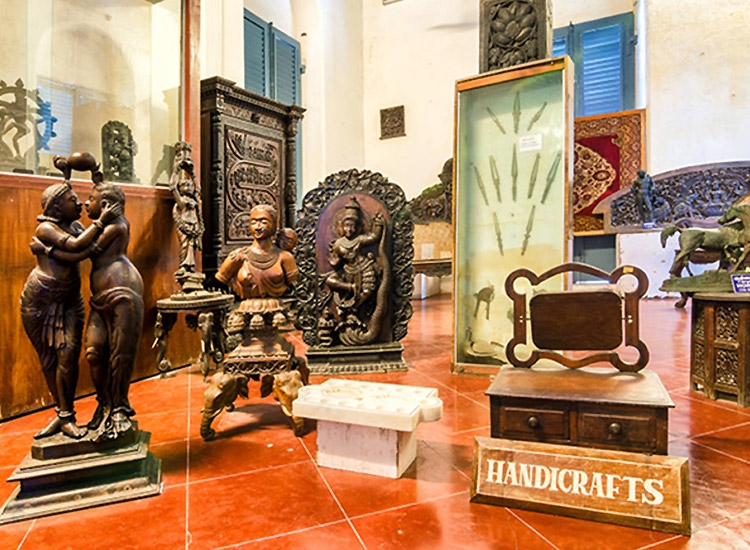 One of the popular places in Pondicherry to learn about the unique heritage, brings us to the Pondicherry Museum. From the remains of archaeological findings of the Arikamedu Roman settlement to artifacts belonging to Cholas and Pallavas rule of Pondicherry and Karaikal, the museum has a number of treasures. 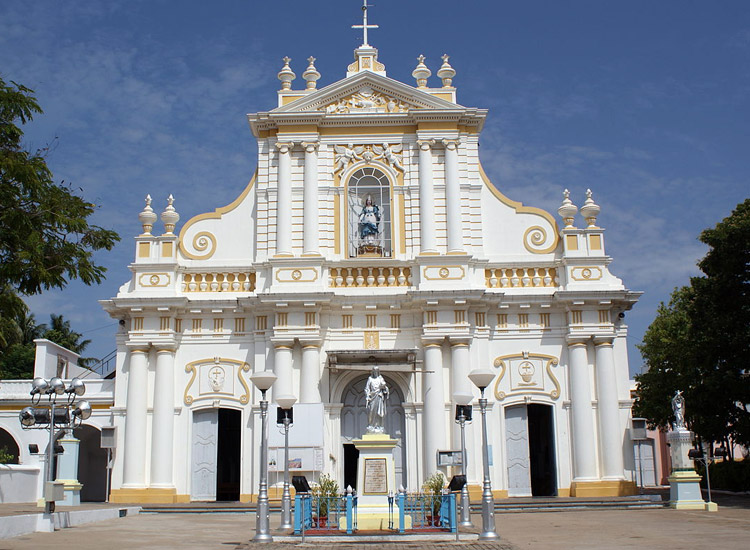 Known as the Eglise de Notre Dame de la Conception Immaculee, The Immaculate Conception Cathedral is one of the must visit places in Pondicherry. Founded in 1686, the holy church is dedicated to Saint Peters, which is also famously known as the Church of Capuchins.

Built of marvelous designs with beautifully interior and exterior designs, the typical Jesuit edifice is a splendid. Tourists can partake in ceremonies organized at the esplanade in front of the Church. Mother Teresa is said to have visited the cathedral. Every year on the 8th of December, The Fest of the Church is celebrated bringing people from far and wide. 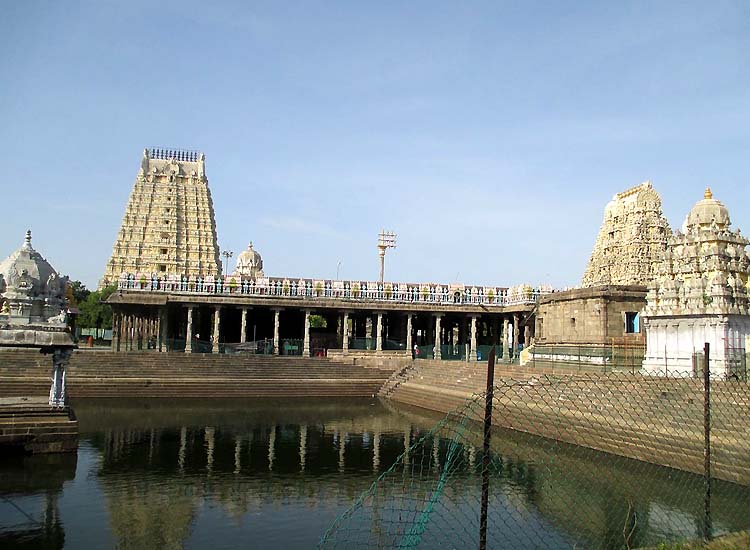 Believed to be the oldest temple in Pondicherry is Sri Varadaraja Perumal Temple. Dating back to 970 AD, the ancient temple is dedicated to Lord Vishnu. The other revered deities are Perundevi Thayer, a local goddess, various avatars of Lord Vishnu present in divyadesams, two great Vaishnava Acharyas, Nikamanda Mahadesikan and Manavalamamuni. The main idol is 5 feet tall in standing form.

Well-known for its Dravidian architectural patterns, front gopuram and sculptured towers. The temple is one of the best places to visit in Pondicherry. The first rice feeding of children known as Annaprasana is an important ritual celebrated here. Other splendid festivals include Sri Ramanavami festival, Vaikunta Ekadasi, Purattasi and Panguni. 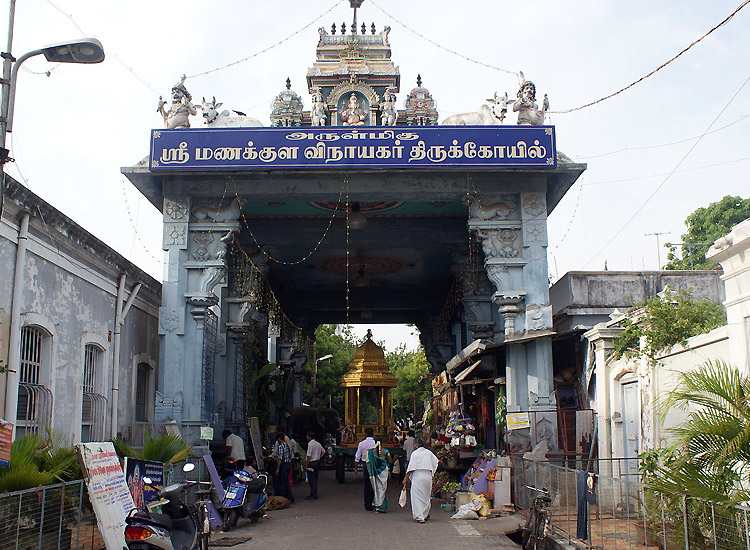 One of the best places to visit in Pondicherry, Sri Manakula Vinayagar Temple is an ancient Hindu temple dedicated to Lord Ganesha. Constructed over three centuries ago, predating French colonial times, the temple till date retains its magnificent glory.

Pay a visit to the temple and take blessings of the divine. The golden spire, a golden chariot in the premises, interiors decorated with forty incarnations and forms of Lord Ganesha are some of the unmissable highlights of temple. The revered temple has a devotee of the animal kingdom, an elephant named Lakshmi, who blesses other devotes with her trunk. 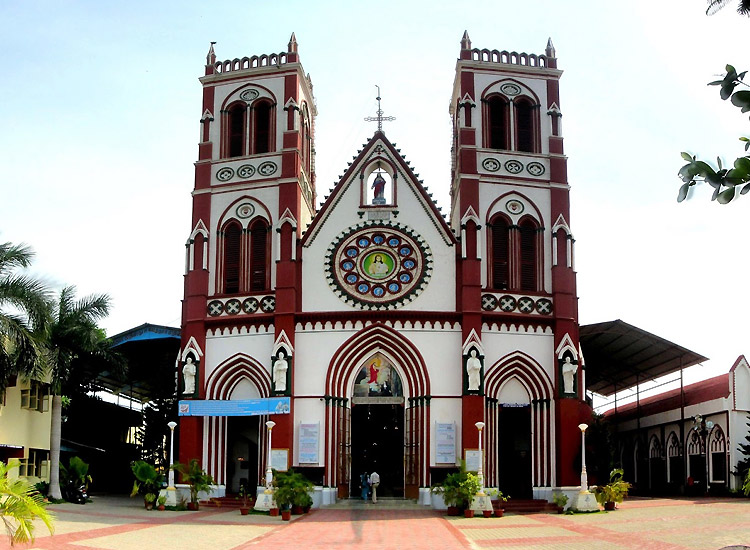 One of the most visited religious sites in Pondicherry, The Basilica of Sacred Heart of Jesus is one of the 21 Basilicas in India. Established in 1908 by the French missionaries it is an excellent example of Gothic architecture.

50m long, 48 m wide and 18m high held by 24 columns, the church has images of the sacred heart of Jesus and Mother Mary, Madonna, four evangelists, twelve apostles along with biblical words written in Latin. Check out the rare stained glass panels depicting events from the life of Christ and saints of the Catholic Church. The basilica organizes grand celebrations on the Easter Day, New Year and the eve of Christmas. 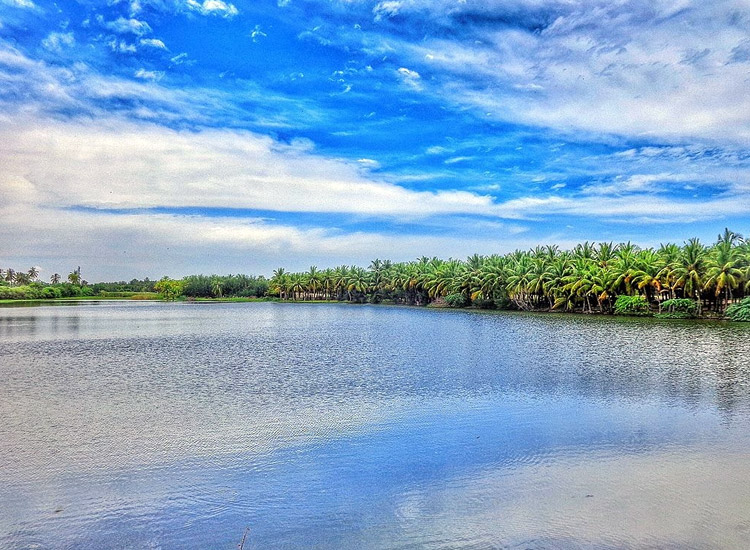 Moving on to our next, amazing destination to visit in Pondicherry, we have Ousteri Lake also known by the name of the Osudu. One of the biggest freshwater lakes in the city, it supplied drinking water in the past. Now it is among Pondicherry’s best tourist attractions, popular for boating and bird watching. Every year in December, the lake is visited by migratory birds. 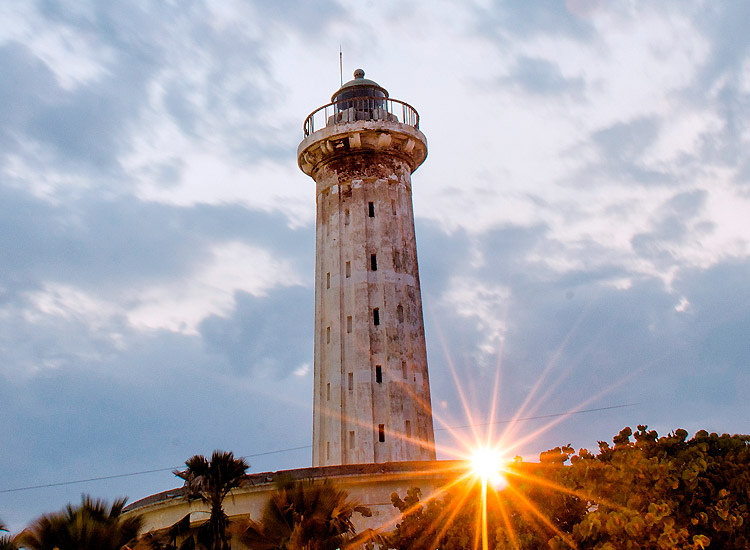 The Old Light House is one of Pondicherry’s most famous landmarks. Though shut down for tourists, visit the site for a rendezvous with history.

Louis Guerre, the engineer of the lighthouse laid the foundation in 1835 but was not operational until 1836. An innovative idea in its time, the lighthouse is 29 meters high, its round tower sits on a square base with a foundation 9 meters deep. When the light source consisted of six oil lamps and two reflectors, it could be seen from a distance of 15 miles. In 1913, the light source was converted to electric lamps and had a range of 26 nautical miles.

Jawahar Toy Museum is one of the best places to visit in Pondicherry. Named among the rarest toy museums in the country, it has a collection of more than 120 dolls. The museum is a must visit place for children.

Collected from several states in the country, the displayed dolls are seen wearing the traditional dresses showcasing the diverse culture. The best exhibition includes dolls from Kashmir, Punjab, Haryana, Rajasthan, Gujarat, Maharashtra, Bengal, Assam, and southern states, dressed in colorful attires, labelled for tourists to spot the unique diversity. Through the artistic display, the Museum educates people about the importance of dolls and toys in Indian culture.