Kerala’s architecture reflects the influence of several cultures and religions that have flourished throughout the years. The climate too has played a pivotal role, as has its long history of maritime trade with people of other regions and nationalities. The colonial influence on its various structures too, is quite noticeable.

An example of the state’s distinct cultural and historical legacy on its architecture can be witnessed on its religious structures, be they churches, mosques, temples or synagogues. To witness the heritage of the state, one should head to the various forts and palaces. The next time you visit Kerala, explore Kerala’s historical architectures and discover its heritage, history and culture. 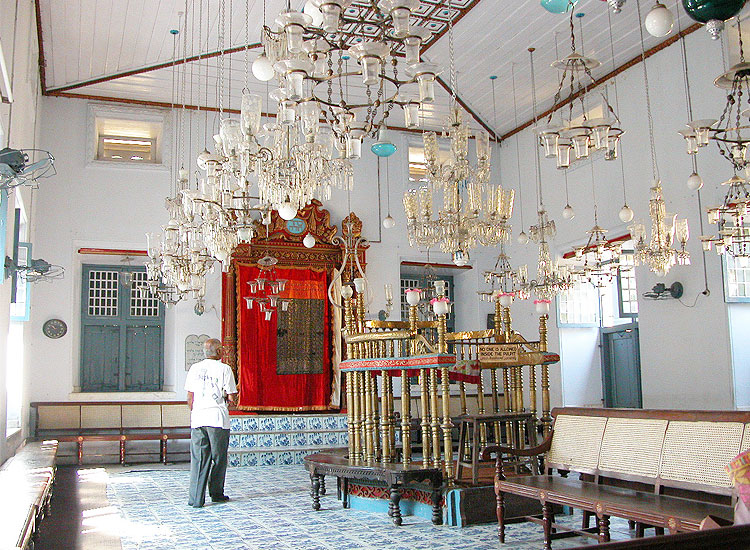 Jewish Synagogue, also known as Paradesi Synagogue, was built in 1568 and is considered to one of the oldest synagogues in the Commonwealth. The word “Paradesi” means “foreigner” in most Indian languages. Its divine halls, which house rare antiques, enchant the visitors. You should check out the glass chandeliers which belong to the 19th century and are imported from Belgium. Other attractions are the 4th century copper plates gifted by the King of Cochin as well as a special oriental rug gifted to this community by Haile Selassie, the last king of Ethiopia. 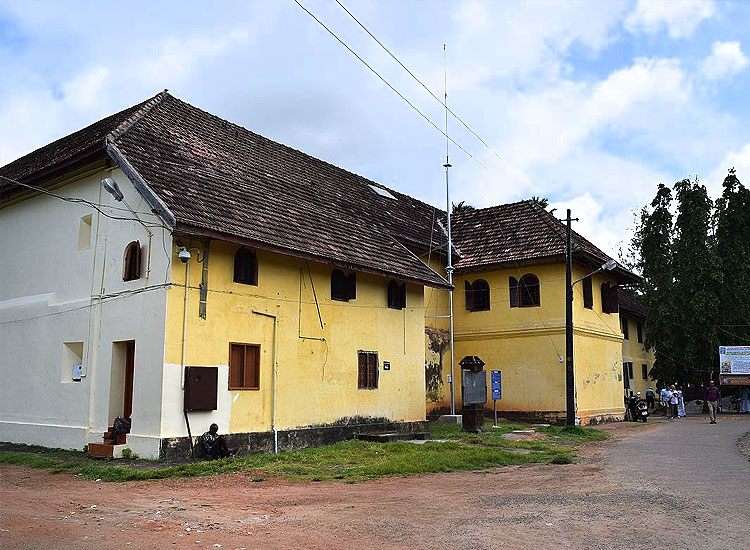 Dutch Palace, also known as the Mattancherry Palace, is a wonderful example of the Kerala style of architecture consisting of colonial influences. It was built by the Portuguese as a gift to King Veera Kerala Verma. The central courtyard of the palace houses the deity of the royal family, “”Pazhayannur Bhagavathi” (the Goddess of Pazhayannur), which boasts a collection of murals depicting the great Indian epics. As a visitor, you will be fascinated with the life-size portraits of all Kings of Cochin since 1864, as well as royal caps, coins, royal umbrellas and other royal items. 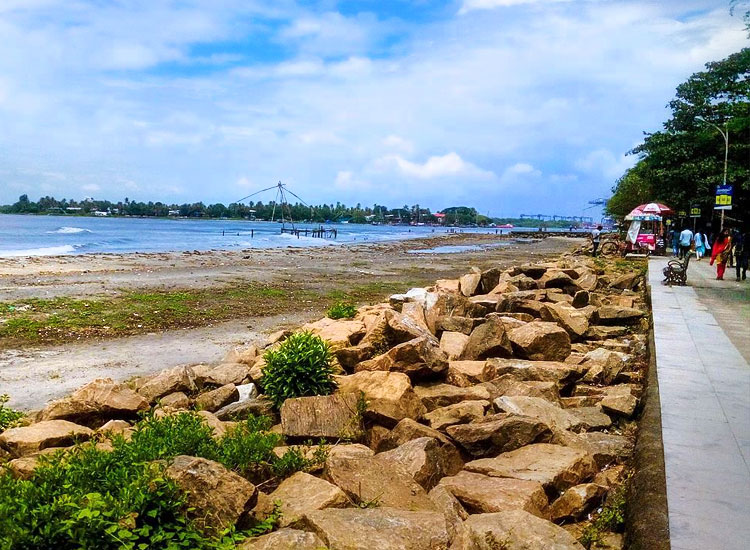 Among the many heritage sites of Kerala is Fort Kochi, whose history arouses as much curiosity as its architecture. Invaded by the Portuguese, Dutch and British at different times, the fort bears strong marks of their influence on its geography and culture, art and architecture. The fort houses several attractions, two of which are Vasco House and Thakur House. While Vasco House is where Vasco Da Gama is believed to have stayed during his visit to Kochi, Thakur House showcases the grand lifestyle of the colonial era and served as a club and community center for the Dutch East India Company. 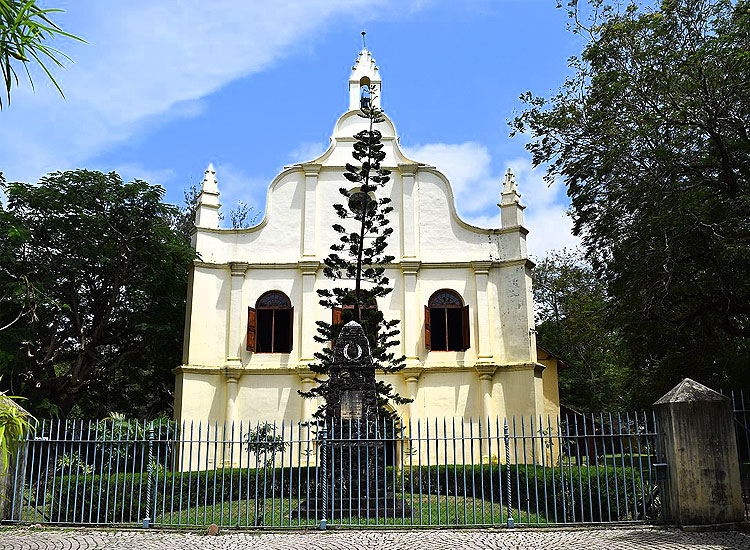 St. Francis Church is one of the heritage sites in Kerala and a storehouse of history. It was here that the renowned explorer, Vasco da Gama, is buried. The Dutch and Portuguese influence on the church is quite strong. The construction of the church began way back in 1503, with mud and wood being used for its construction. What catches your attention is the gabled timber framed roof, along with the interiors with their two stepped pinnacles. 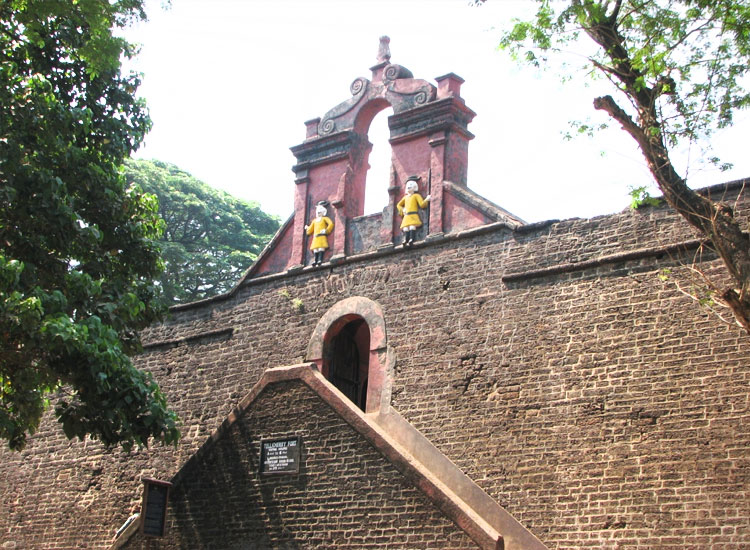 Thalassery Fort, located about 22km from Kannur, is a colossal structure that was built to ward off attacks. The entrance captures your attention quickly enough, as it passes through the top of a giant wall. The other characteristics of the fort are its intricately carved doors and secret tunnels leading to the sea and a lighthouse. It’s believed that this fort served as the place from where coins of the East India Company were minted. 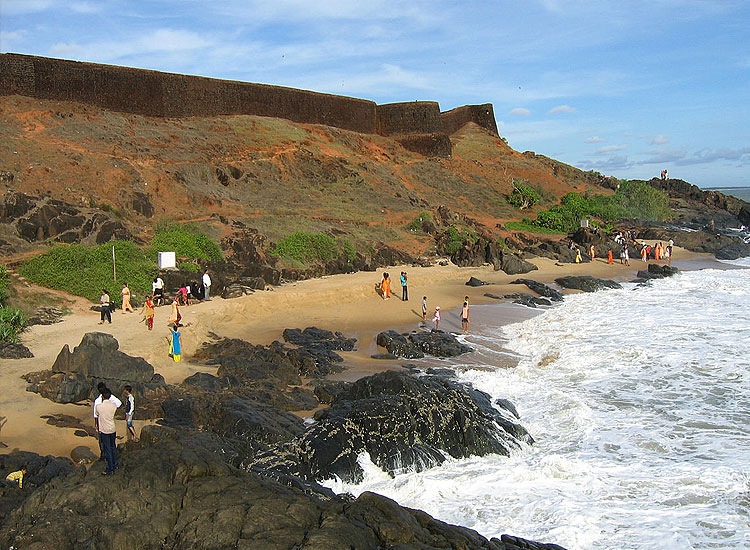 Bekal Fort holds the distinction of being one of the largest and best preserved forts in all of Kerala. It’s bordered by the wonderful Bekal Beach whose shores are washed by the azure waters of the Arabian Sea. Visitors can get amazing views of the Arabian Sea from the tall observation towers of the fort. In close proximity to it stands an old mosque which is believed to have been built by Tipu Sultan of Mysore. 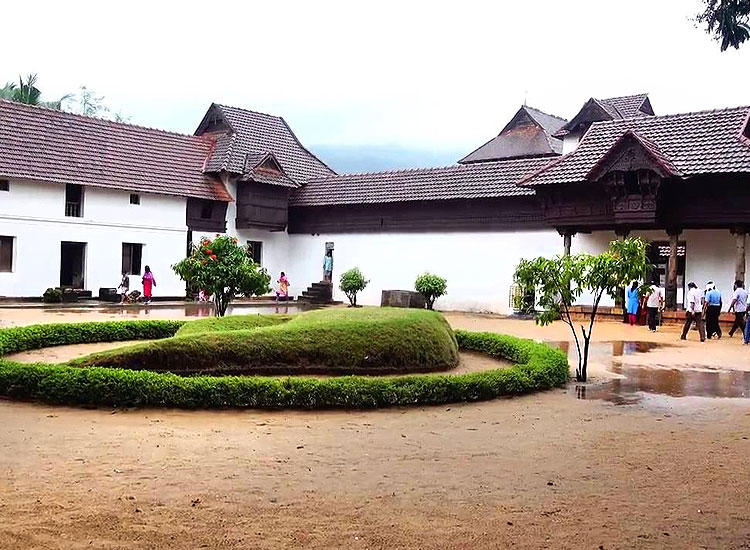 Padmanabhapuram Palace reflects opulence and grandeur on a large scale, and draws praise and admiration from all those who visit it. A masterpiece of tradition Kerala architecture, it lies 64km from Thiruvananthapuram, the seat of the erstwhile rulers of Travancore. It draws admiration due to its murals, floral carvings and black granite floor. These lend an air of mysticism to the entire place. Other incredible sights in the palace are the Durbar Hall, underground passages, a temple dedicated to Goddess Saraswati and hanging brass lanterns, besides others.

[Stay at the heritage hotels of Kerala.] 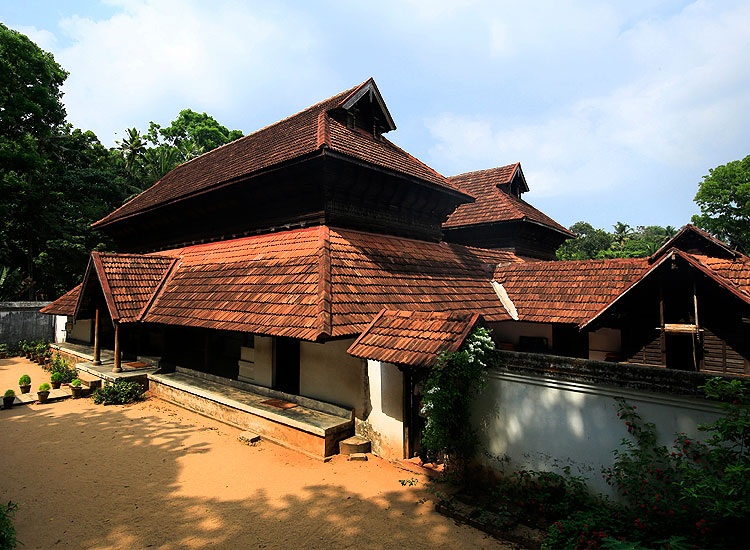 The Krishnapuram Palace represents the Kerala style of architecture, defined with gabled roofs, narrow corridors and dormer windows. The special highlight of the palace is ‘Gajendra Moksham’, an enormous mural depicting an elephant saluting Lord Vishnu with the other gods and goddesses acting as witnesses. This mural, measuring 49sq. m, is the largest mural of its kind in Kerala. The palace was renovated in the 18th century and is a protected monument under the Archaeology Department. Rare antiques and paintings are housed in this palace. 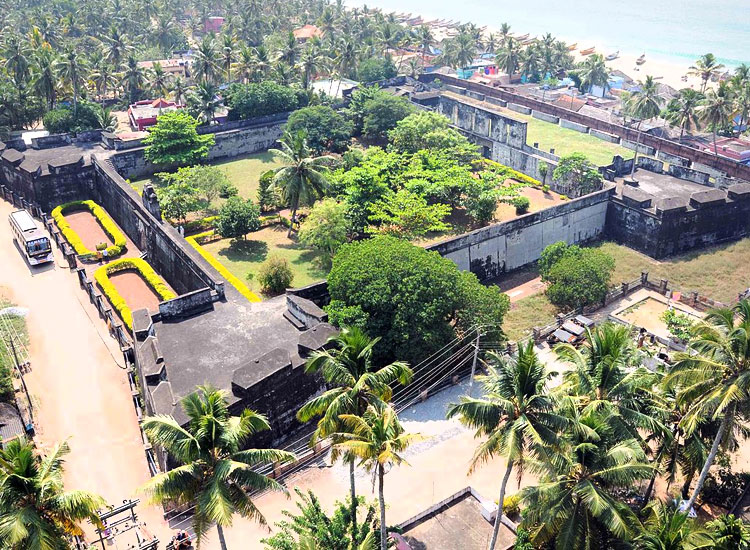 Anchuthengu Fort, also known as Anjengo Fort, is placed between the sea and the backwaters.  Anchuthengu Fort has had a fascinating history behind it. It played an important role during the invasion of the Mysore king, Hyder Ali. It also served as the store house of ammunition for the British during the Anglo-Mysore wars of the 18th century. 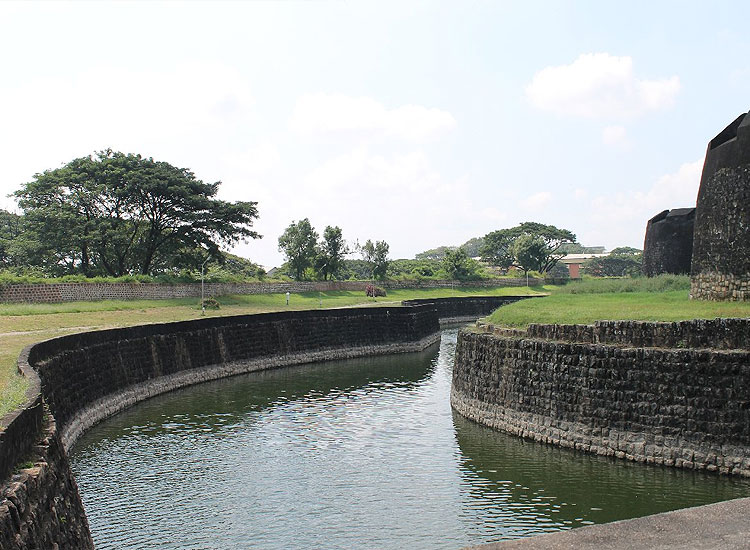 Palakkad Fort, also known as Tipu’s Fort, has an interesting history associated with it. It once served as an important military base in the past before being rebuilt by Hyder Ali in the 18th century. However, it was under the Mysore rulers that the British took control of the place. Today, it’s an important historical destination.

This fort is counted amongst the best preserved forts in South India, with its thick laterite walls impressing visitors immensely. Between the fort and the Palakkad town lies a huge ground that serves as an important location for public meetings and important functions. The monument is protected   by the Archaeological Survey of India and is a popular picnic spot.

Thripunithura Hill Palace Museum, located about 10km from Kochi, once served as the official residence of the erstwhile rulers of Kochi. It was built in 1865, but is now famous for being a full-fledged ethno-archaeological museum along with the first heritage museum of Kerala. The palace complex consists of 49 buildings and is built in the traditional Kerala style of architecture with over 52 acres of terraced land surrounding it. Gundert Bungalow, located at Illikkunnu, Thalassery, served as the residence of the German missionary, scholar and lexicographer, Dr. Herman Gundert. His enormous contributions to the Malayalam language is well-recorded. The bungalow attracts tourists to its wide verandahs, enormous doors and other features characteristic of a colonial mansion. However, you should visit this building not just for its architecture but also for its fascinating history. Edakkal Caves have confounded historians and archaeologists alike since a long time. These masterpieces of nature can be reached after an arduous 4,000ft trek up the mountain. The credit for this cave’s history goes to Fred Fawcett, Superintendent of Police of the Malabar district, who discovered the caves in 1895.

The caves contain several etchings and prehistoric line drawings which indicate that people stayed in them during different times in history. The three sets of petroglyphs which can be seen in the caves are almost 7,000yrs old. Carvings belonging to Mesolithic and Neolithic Age can also be seen. Along with this, images of a king, queen, elephant, deer and tools used by earlier human beings have also being depicted. The various rock-cut temples of Kerala are of immense historical significance and draw people in impressive numbers. One of these is the rock-cut Siva Temple which dates back to the 8th century AD. The temple’s close resemblance to the Pallava style of architecture is very striking.

Vizhinjam rock-cut cave temple is another tourist attraction. Containing sculptures dating back to the 18th century, this granite cave contains a one-celled shrine along with a sculpture of Vinandhara Dakshinamurthi. On the outer wall of the caves, depictions of half-complete relics of Lord Shiva with Goddess Parvathi can be found. The main attraction at Karumadikuttan is a large black granite statue of Lord Buddha in a seated position. Situated at a distance of 3km from Alappuzha, it was built somewhere between the 9th and 10th century and reminds one of the existence of Buddhist culture in this region. Although one half of the statue is broken, it is still a magnificent sight to come across. Legend has it that the left part of the statue was completely destroyed by an elephant. Sulthan Bathery, earlier known as Ganapathivattom, is so called because it was here that the erstwhile ruler of Mysore, Tipu Sultan, during his invasion of the Malabar region, dumped his ammunition and parked his artillery battering in an old Jain temple.

This place was once famous for the strategic importance it enjoyed. Tourists are drawn to this place due to its jungle trails, pre-historic caves, pure rivers and streams and the dense greenery of the hills. This place offers both sightseeing and adventure to the visitors. Happen to be a lover of history? Well then, head to the Napier Museum, which lies in close proximity to the Zoological Park. Built in the 19th century, its home to various kinds of historical artifacts, some of which include bronze idols, ancient ornaments, ivory carvings and a temple chariot. A particular attraction is the Japanese shadow play which depicts the popular Indian epics, Ramayana and Mahabharata.

Napier Museum, one of the museums in Kerala, offers visitors a chance to view the cultural heritage of the state. Named after the former Madras Governor General, John Napier, its architectural style is a delightful mix of Indian, Chinese, Mughal and Kerala schools of architecture.

Basilica of Our Lady of Dolours Basilica of Our Lady of Dolours lays claim to being the third tallest church in Asia, and is a remarkable example of Indo-Gothic style of architecture. Located in Thrissur in Kerala, it’s also one of the most popular tourist attractions in Kerala. The construction of the church is said to have taken around 11 years.

As you enter the church, your eyes fall upon the massive belfries that seem to touch the skies. The ceiling of the church is adorned with the mural painting of the Holy Trinity, while its floor is paved with mosaic. The altar, which is about 100ft, is another enchanting sight. Below the altar stand the twelve apostles. Basilica of Our Lady of Dolours also hosts the main feast on the last Sunday of November. This festival is second only to the Thrissur Pooram (an annual Hindu festival).