Often referred to as the ‘Venice of the East’, Udaipur is counted among the most romantic cities in the world, located amidst Aravalli ranges in the state of Rajasthan. The optimism of this beautiful city lies in its architectural marvels that got patronage from the artificial lakes and ornate palaces with the background of verdant Aravalli Mountain ranges. The fairy tale palaces, lakes, gardens, temples and narrow lanes scattered with stalls make it a kaleidoscopic city.

The stunning architecture of palaces reflects the splendor of the royal era and captures the heart of every visitor. It features several luxury heritage hotels that provide accommodation to the travelers. It is indeed a dream destination for spending romantic holidays where tourists can experience breathtaking beauty of nature and culture. Here is the list of top heritage hotels in Udaipur for your kind perusal.

Built in the 17th century, Lake Palace, Udaipur, is the most luxurious and favored hotels in the country. It is situated on a solid foundation of 4 acres of rock amidst the azure Lake Pichola. This premier heritage hotel is owned and managed by the Taj Group of Hotels.

The hotel features 83 centrally air-conditioned rooms which include 17 suites and a Grand Presidential Suite. Each room is decked with crystal work, carved arches, glass work, paintings and offer stunning views of the lake. This white marble palace was built by Maharaja Jai Singh II in 1746 as the summer resort for royal families. 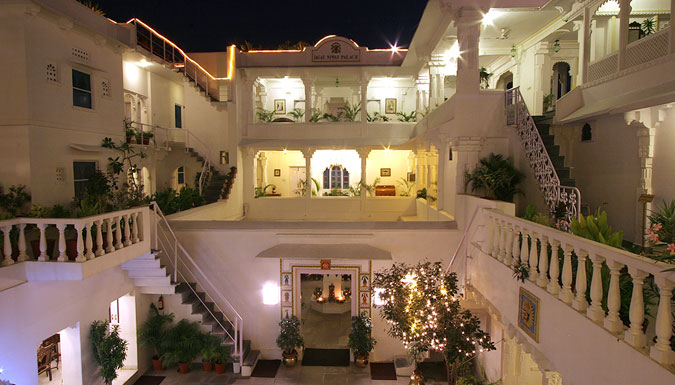 Built in the 17th century, the Jagat Niwas Palace exudes the fragrance of royal aesthetics and the panache of princely era. The romantic ambience is made further captivating with the sounds of placid waters of Lake Pichola.

There are 29 well-appointed rooms, each of which is styled differently. One can see beautiful views of the lake and other places within the city. Built in the Mewar style, Jagat Niwas Palace is a perfect place for relaxing and calm vacation. Other facilities offered by this hotel include shopping arcade and a puppetry show.

Originally built by Maharaja Fateh Singhji’s, Shiv Niwas Palace was converted into a heritage hotel by HRH Group of Hotels. Opened as a hotel by Maharana Bhagwat Singh in 1982, the Shiva Niwas Palace’s first shot to fame with the James Bond movie ‘Octopussy’.  It is one of the best heritage hotels in India and renowned for private terraces, precious gems and a treasure trove of souvenirs. It was later used to accommodate royal guests. The hotel has won 3 National Tourism Awards for best heritage hotel in the “Heritage Grand” category. 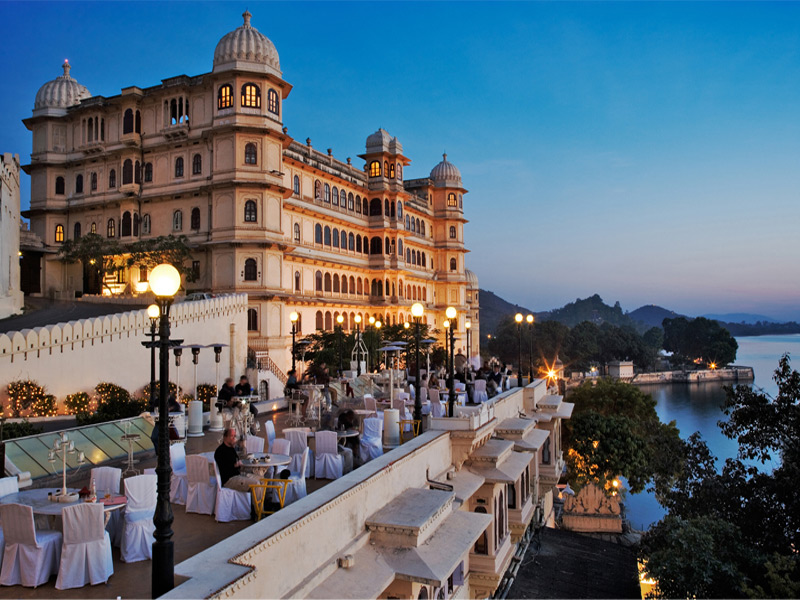 Built in the early 20th century, Fateh Prakash Palace was named after Maharana Fateh Prakash who reigned during its construction. It serves as an exclusive venue for royal functions, where the Maharanas of Mewar held court. The hotel also plays host to ceremonial dinners and corporate events. It has won 5 National Tourism Awards for the best heritage hotel in the ‘Heritage Grand’ category.

One of the major attractions of Udaipur that welcomes guests in its relaxing ambience, The Lalit Laxmi Vilas Palace reflects the architectural grandeur of Mewar. It overlooks the majestic Fateh Sagar Lake and houses 55 luxurious rooms equipped with state of the art amenities. There are two multi-cuisine restaurants- Padmini and Aangan- that offers extensive variety for all meals. The hotel has perfect venues such as Zen Fountain, Lower Lawn and Amrapali Lawns. The popular man-made Fateh Sagar Lake, located close to this hotel, is a must visit tourist attraction.

Founded by the legendary Maharana Udai Singh in 1559 A.D., Lake Pichola hotel offers a wide range of amenities to ensure a great stay and time. It is located in the Brahmapuri Island on the Lake Pichola. Lake Pichola hotel is very popular with the tourists and known for its superb architecture. There are 27 double rooms and 2 suites that come equipped with various modern amenities such as attached bathroom with hot & cold water.

Set amidst serene wooded landscape of the Aravalis, Shikarbadi Hotel is located just 15 minutes away from Udaipur. It is such a peaceful destination that you won’t miss the holler of the city at all. It is built under the aegis of the HRH Group of Hotels. It is set beautifully at the foothills of the Aravalli Mountains and provides a picturesque backdrop to the setting. Besides, guests can enjoy a rejuvenating dip in the swimming pool or can play a round of cricket on the cricket ground. Private events can be conducted in the well-maintained lawn space of the property. 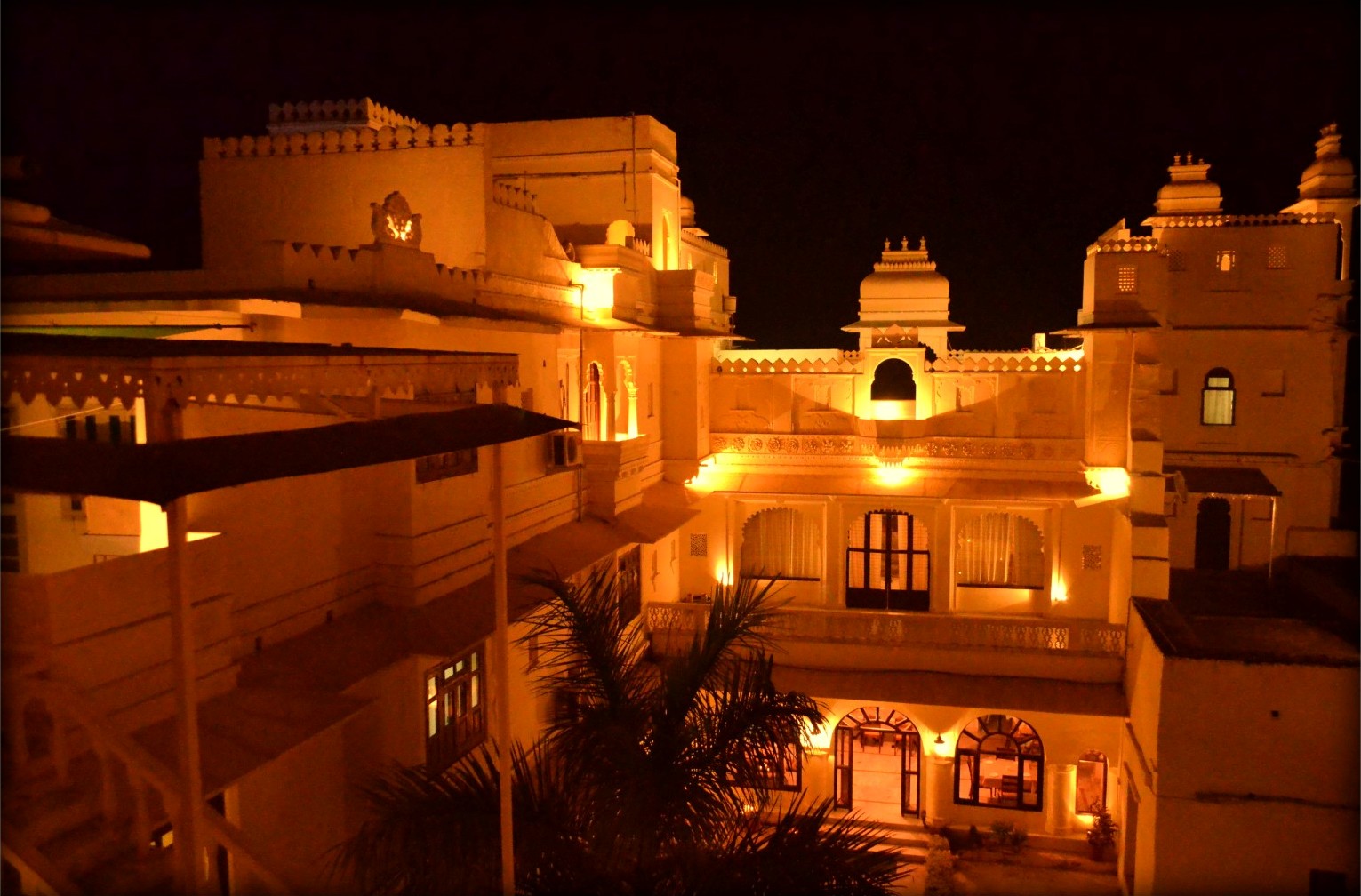 Located at village Bhindar in Udaipur, Rajmahal Bhindar is a 434 year old Imperial palace and was the erstwhile home of Maharana Shakti Singh, the younger brother of Maharana Pratap. This 16th century palace depicts the typical architecture of Mewar and proudly stands on the local Bhindar stone. The rooms of this heritage hotel are filled with a sense of sophistication.

A grand luxury hotel, Jagmandir Island Palace is a unit of the HRH Group of Hotels. It is a historic 17th century palace renovated as a complete destination. It offers lavishly designed rooms and suites offering unsurpassed views of Lake Pichola. Leisure and recreational facilities offered at Jagmandir Island Palace include The Panghat Spa and Salon, yoga & meditation, classical music evenings and motor boat rides on Lake Pichola.

You can book Devigarh hotel in Udaipur from LuxoIndia.com

Housed within an 18th century palace in the village of Delwara, Devi Garh by Lebua is a famous heritage hotel and served as the royal residence of the rulers of Delwara principality. The all-suite heritage hotel features 39 suites with an amazing attention to design and detail, using local marbles and semi-precious stones. One of the salient features of Devi Garh Palace is the swimming pool, made up of white granite and canopied chairs.