Discover the incredible Forts and Palaces in Jodhpur

Just like the rest of Rajasthan, Jodhpur boasts a rich legacy, both historically and architecturally. Its colossal forts and magnificent palaces stand as testimony to its glorious traditions. Being the second largest city of the state, it has a number of forts and palaces that are frequented by tourists the year round. Whether it’s exploring its hidden passage ways or marveling at the opulence all around, a visit to these visions of greatness and beauty leaves one thrilled and excited to no end. This blog brings to you some of the best forts and palaces in Jodhpur. Be sure to check them out on your next trip. 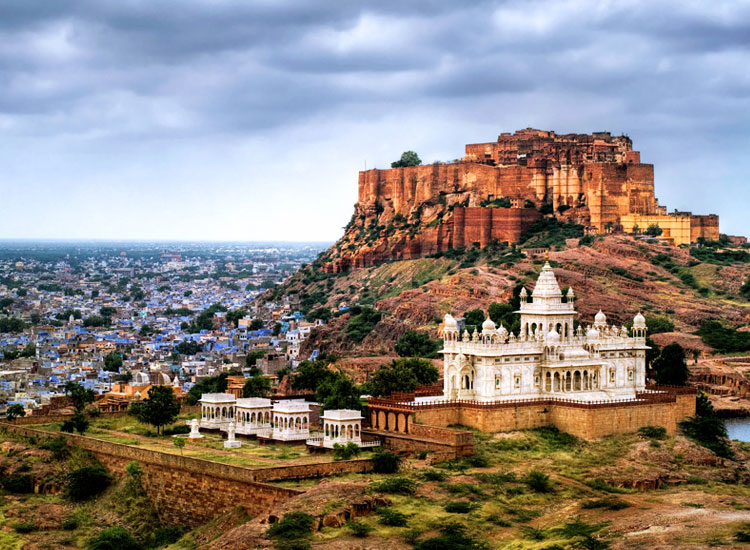 Once serving as the seat of the Rathore rulers from the House of Marwar, Mehrangarh Fort is an exercise in grandeur and royalty. It holds the distinction of being one of the largest Indian forts. This fabulous fort, standing at an unbelievable height of 400ft above the city, was constructed in 1459 AD by Rao Jodha, the 15th Rathore ruler.

The fort showcases a unique amalgamation of several styles and influences. Its colossal battlements, constructed of solid stone, reach a height of 125ft with the width being six meters at some places. A special attraction inside the fort is the museum, which exhibits a series of fascinating items like folk musical instruments, cannons, palanquins, furniture, paintings etc. 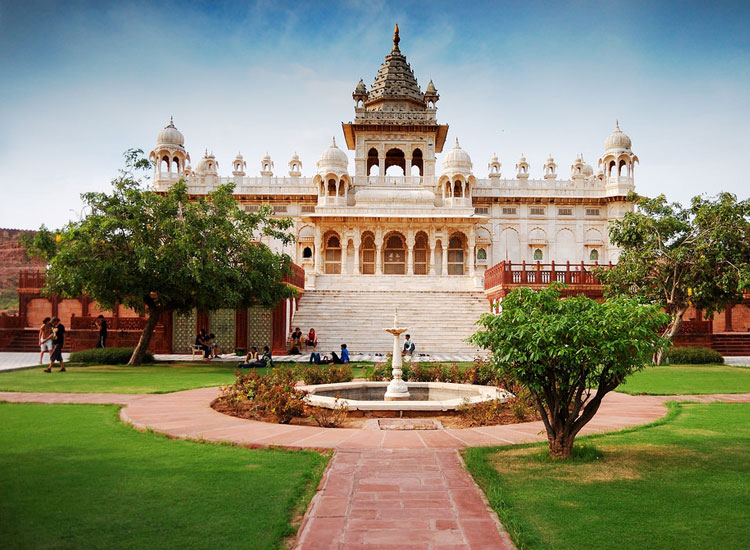 Jaswant Thada is one of the best places to visit in Jodhpur. This incredible memorial, built towards the end of the 19th century as a tribute to the leader Jaswant Singh, is a prominent tourist attraction. It’s said that Jaswant Singh endeared himself to his people with his benevolent rule which ensured prosperity and happiness.

Visitors here are enthralled by the intricately carved sheets of marble, which reflects the architectural brilliance of the sculptors. The stones here are polished to perfection, thus leading the exteriors to emit a brilliant glow under the rays of the sun. Inside this white marble memorial, one can find portraits of the various Rathore rulers. The other attraction here is the cenotaph, which consists of outstanding marble jali work. 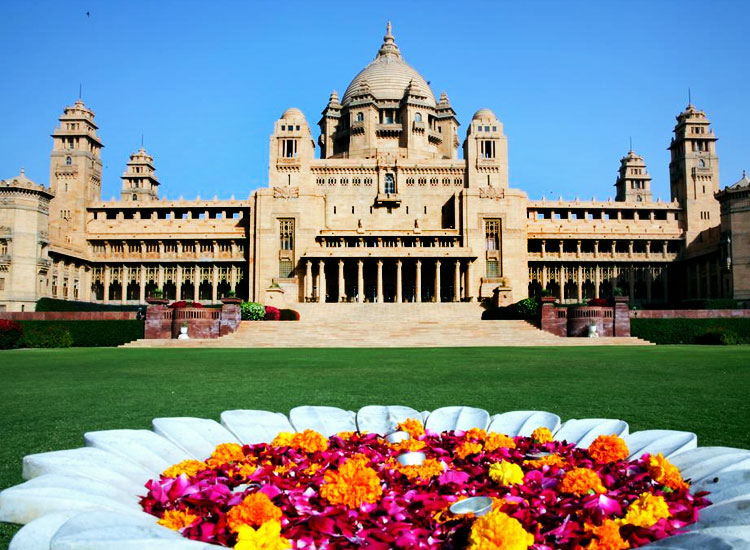 Umaid Bhawan Palace is counted amongst the best heritage hotels in Jodhpur. The construction of this imposing palace was initiated by Maharaja Umaid Singh in the year 1929 and completed in the year 1945. Due to the use of stones drawn from the Chittar Hill, it was also known as Chittar Palace.

Designed by the renowned British architect, HV Lanchester, this palace showcases a blend of various architectural styles like Indo-Saracenic, Classical Revival and Western Art Deco styles. This 347 roomed palace is recognized as one of the largest private homes in the world. The entire palace is divide into three segments – Royal Residence, Heritage Hotel and Museum. A special fascination here is the Throne Room, which consists of a private museum, a library, an indoor swimming pool etc.

Visiting Jodhpur? Then make sure you visit Rai ka Baag Palace. This marvelous palace was built in the year 1663 by the queen of Maharaja Jaswant Singh-I, Hadiji. It’s commonly believed that the king took a special liking to this palace and spent most of his time in the octagonal-shaped bungalow of the palace.

This palace also owes its eminence to the visit of Swami Dayanand Saraswati – the famous Hindu religious leader and founder of the Arya Samaj. He gave his sermons from the grounds of the palace itself. 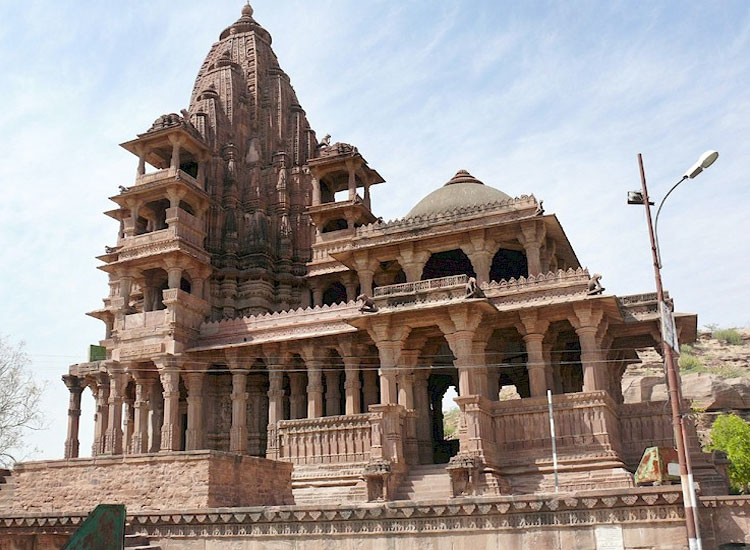 Want to witness the most beautiful shrine in Jodhpur? Visit Maha Mandir, an example of an outstanding piece of architecture. This amazing 84 pillared temple was built in the year 1812, and has Lord Shiva as its main presiding deity.

One of the attractions of the temple are the intricate stone carvings that display yogic postures of all kinds. Apart from that, visitors here are also excited by the various pre-historic shrines and houses which are adorned with amazing stone works. The shrine is visited regularly by Shiva devotees and general tourists who are completely fascinated by the stunning architectural brilliance reflected in its interiors. This place is also a photographer’s delight.

Stay at Heritage Hotels in Jodhpur on your tour to this destination. 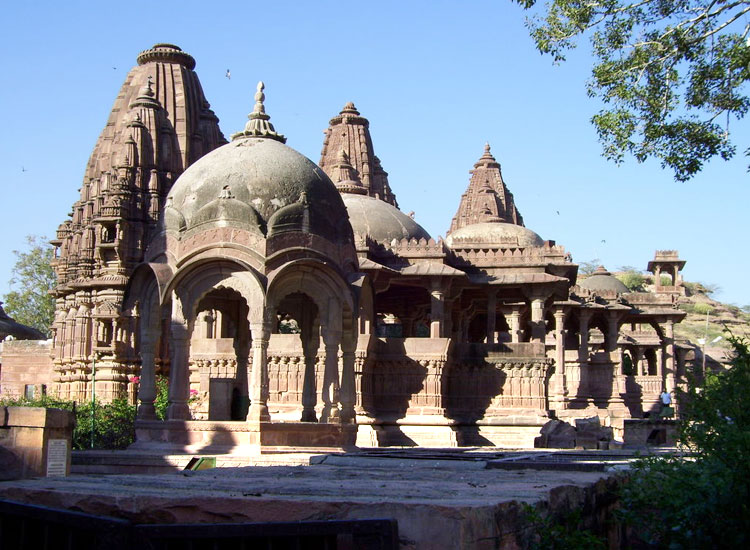 There are many heritage sites in Jodhpur, and the Udai Mandir is one of them. One of the primary reasons to visit this temple is to appreciate its architectural excellence. Standing on a huge platform, it is supported by 102 pillars. The upper part of the temple gate is composed of carved sandstones.

The interiors are adorned with beautiful wall paintings that depict the 84 Yogasanas, including the pictures of Nath Yogis made out of pure gold. The temple’s Garbha Griha is enclosed by a railing of finely carved sandalwood, thereby displaying the finest of aesthetic practices. The door of the temple, made of sandalwood, is an attraction in itself. 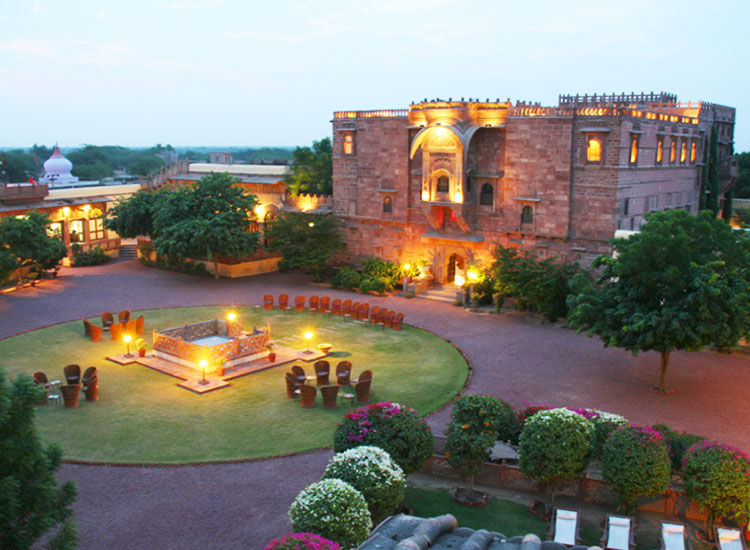 If you wish to come across the best of heritage hotels in Jodhpur, visit Fort Chanwa. This elegant and classic place has been restored to its former glory by its owners, Maharaja Dalip Singh and his wife Rani Madhu. Every room here possesses its own charm, while the numerous verandahs, gardens and courtyards captivate one’s heart with their magical ambience.

The romance of the bygone age is reflected by the intricately created “jharokas,” along with the ornately carved lattice work friezes. The entire fortress is carved out of the famous red sandstone of Jodhpur. Here, one comes across a complex of unexpected stairways to secret pavilions and roof tops that provide panoramic views of the village below and the Thar Desert beyond. Besides, the traditional paintings which adorn the walls reflect the skills of the bygone days.