Hampi, a UNESCO World Heritage Site, located in the central part of the Indian state of Karnataka, are a series of ruins (for lack of a better word), that shed light on the glorious reign of the Vijayanagar Empire. Commenting on its magnificence, Abdul Razaq, a Muslim envoy who visited Hampi in its glorious past, wrote, “Vijayanagar is such that the pupil of the eye has never seen a place like it”.

One is simply fascinated while exploring the ruins that exist here in the form of markets, temples and palaces. The exquisite architecture spread over a large area, lends the entire place a feeling of timelessness. It’s a place where even the boulders embellish the entire landscape in a peculiar way. If you haven’t visited Hampi, you are missing out on a wonderful, and major, historical experience. This is a complete travel guide on Hampi: UNESCO World Heritage Site that acquaints you with its history, architecture, places to visit and several other aspects that are helpful while planning a trip there.

The story behind the creation of Hampi as the capital of enormous empire is quite interesting. It all started when two local warriors, Hakka and Bukka, were captured as prisoners by Tughlaq when he attacked the Chalukya kingdom of Kampili (about 25km from the present day Hampi). However, the two warriors won the admiration of the Sultan with their good behavior. It was they who were sent to pacify the rebellions in the southern provinces. Although they did pacify the local chieftains, they also established their empire at Anegundi, near Hampi.

The capital was eventually shifted to Hampi (1336AD), and the empire only grew in its power and glory. Gradually, it led to the formation of the Vijayanagar Empire (City of Victory) which encompassed the whole of Southern Peninsula, stretching from the Arabian Sea to the Bay of Bengal. However, the flourishing empire met its unfortunate end two centuries later when Rama Raya was defeated by a confederation of Muslim kings. This was followed by the shifting of the capital from Hampi. 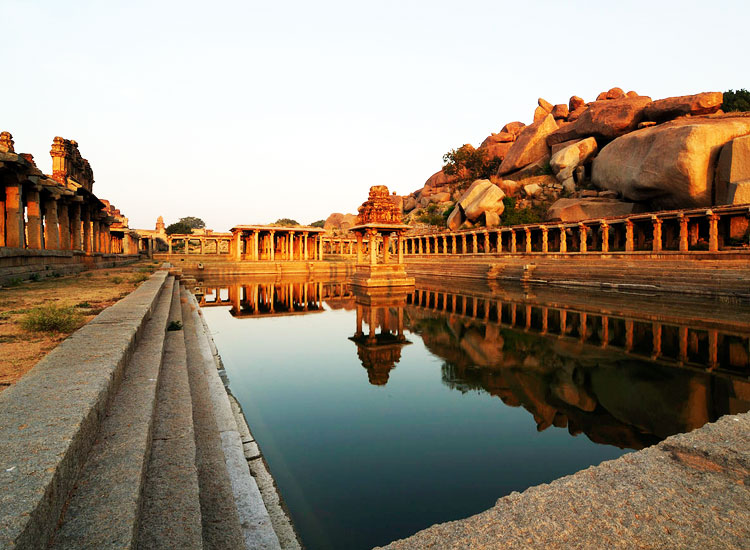 Bazaars, temples and other fabulous pieces of architecture shed light on the glorious parts of Hampi. Every bend round the corner throws up an attraction, while there is something to be explored at regular intervals.

[Book your India heritage tours with our customized packages.]

One of these is the Virupaksha Temple, one of the foremost attractions on your tour to Hampi. Located beside the southern bank of the Tungabhadra River, this temple is dedicated to Lord Shiva and is also famous as Shri Lokeswara Maha Sila Prasada. It’s believed to be one the oldest temples in India, dating back to the 7th century AD. This temple is considered to be a UNESCO World Heritage Site as a part of Hampi Group of Monuments. One of its main attractions is the courtyard consisting of a 100 Column Hall.

The other attraction is the Vitthala Temple Complex, which was built around the 15th century. It contains major attractions such as the iconic Stone Chariot, Ranga Mantapa with its 56 musical pillars and 4 open halls along with several sculptures. The other attractions are the sculptures of Yalis (mystical creatures), the Kalyana Mantapa (ceremonial marriage hall) and the 100 pillared hall.

Stone doors, Monolithic Bull and the Elephant Stables are all admirable in their own right. The Queen’s Bath is definitely worth checking out. Essentially a big verandah with a rectangular pool surrounded by extended balconies and carved domes, this is where the royals took bath. The famous bazaars that Hampi was, and is, so famous for is the Sule Bazaar. Known as the Courtesan Street, it’s one of the four markets which were renowned for their precious stones and other expensive materials. 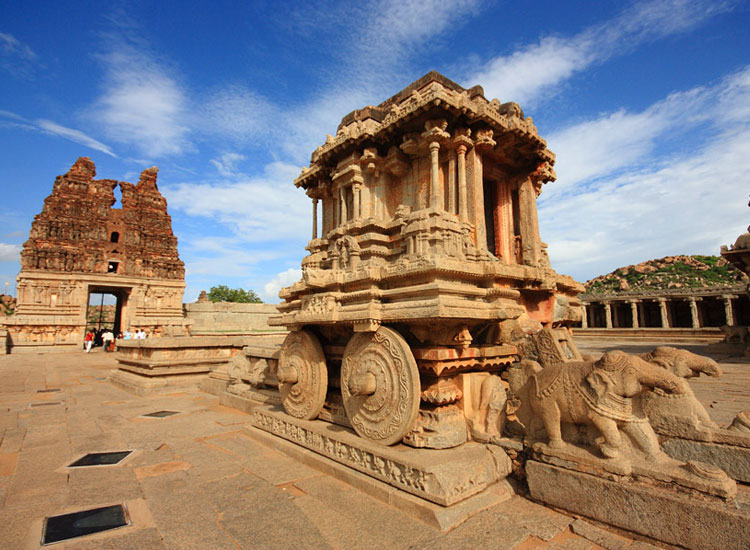 Some of the other famous structures which shed light on the architectural excellence prevailing in that period are Ugra Narasimha Statue, Kadalekalu Ganesha Temple, Hazara Rama temple, Achyutaraya Temple and Lakshmi Narayan Temple, which consists of the biggest statue of Narasimha.

A unique experience awaits you here in the form of an oracle crossing. Basically a floating basket, it is a traditionally designed craft used to carry people across the river. Taking a ride on these takes you to the ghats (bathing areas) near the Virupaksha Temple, as well as to another bathing ghat in front of the Kondaram Temple.

How to get around Hampi

You have three options as far as the places to visit in Hampi is concerned. These are walking, bicycle, auto-rickshaw and bus. Walking of course, has its own advantages. A large number of places can only be explored by walking. At times, it’s necessary to walk due to the lack of motorable roads. Several of these walking trails can be explored through semi-trekking.

Tourists have the option of staying either at Hospet or at the Hampi Bazaar area itself. There are plenty of options available, from luxurious resorts to cheap guesthouses.

Of course, given the heat and humidity during the summers, it’s advisable to visit it during the winters, during the months of November to February. However, if you have no problem with the heat, you can visit it throughout the year.

There are many ways of reaching the UNESCO World Heritage Site of Hampi. It is well-connected to different parts of the country via road, rail and air. Located in the state of Karnataka, it is very easy to reach this place.

Hampi does not have a railway station of its own. The nearest railway station to this place is Hospet, which lies at a distance of almost 13km. This railway station is connected to different parts of the country, thereby making it quite easy to reach Hampi. Travelers can take the bus after reaching Hospet Railway Station.

Hampi is well-connected to the major cities of Karnataka like Bangalore via roadways. KSRTC buses operate on a regular basis from Hospet to Hampi. To reach Hampi by road, there are different options which a tourist can choose from, including taxis, buses or car rental.