15 Churches in Goa to include on a Heritage Tour

Goa, the land of beaches, parties, and amazements is also known for its rich heritage. The smallest state in India is witness to a different era. Since the Portuguese landed in India in the 1500s, Goa had been their stronghold, which was finally taken back in 1960s. The legacy of their 450 years survives in the form of incredible churches in Goa that are also listed as UNESCO World Heritage Sites in India. A holiday in Goa must include a visit to these amazing churches which are known for their architectural splendor and spiritual significance.

Here are the best 15 churches in Goa that you must pay a visit to: 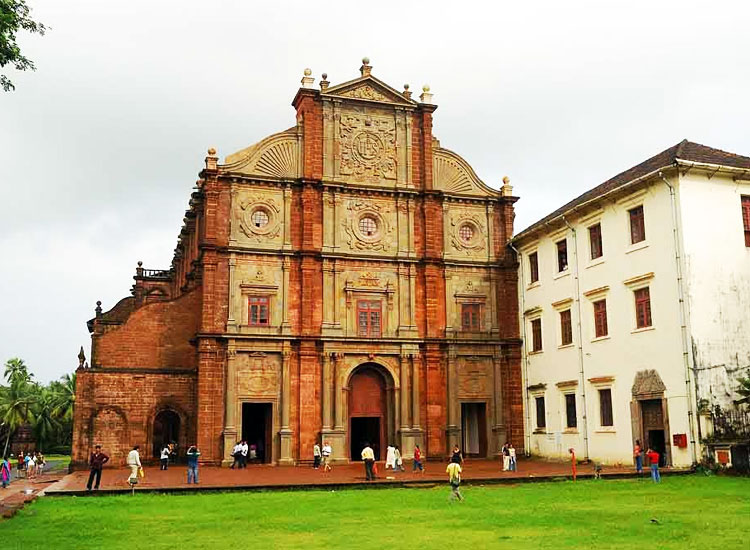 Listed as a UNESCO World Heritage Site, the Bom Jesus Basilica is one of the most visited churches in Goa. The unique baroque architecture is quite fascinating but the highlight of the church is its legend. It holds the mortal remains of one of the patron Saints of Goa – St. Francis Xavier, till date in a pristine form in a silver casket. It is deemed as a miracle, as St. Francis Xaviers body has not decomposed since the 17th century. The display is available to the public every 10 years (next being 2024). 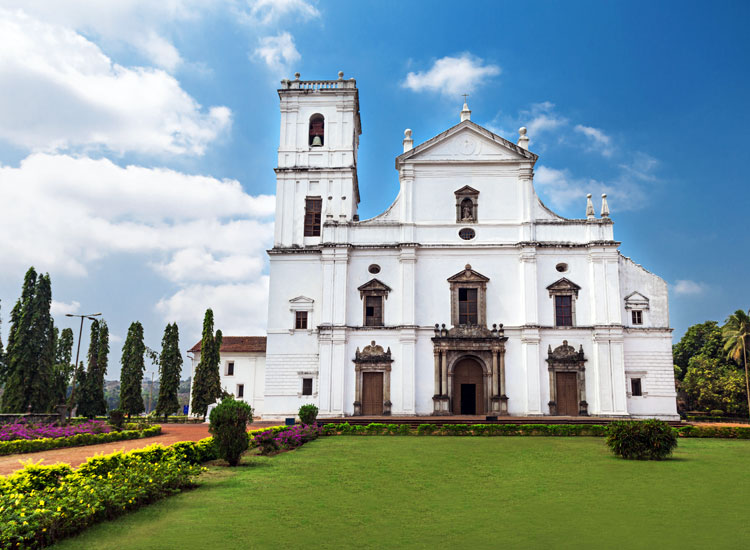 One of the largest Churches in Asia, Se Cathedral is dedicated to St. Catherine. The Portuguese built the church to commemorate victory over the Muslim rulers of Goa. Intricately carved both outside and inside, the masterpiece took almost 80 years to build. It is said that the chiming of the Golden bell could be heard all over Goa. Destroyed by lightning, the church is left with a unique irregular structure.

[Plan your Goa heritage tour with our tailor-made packages.] 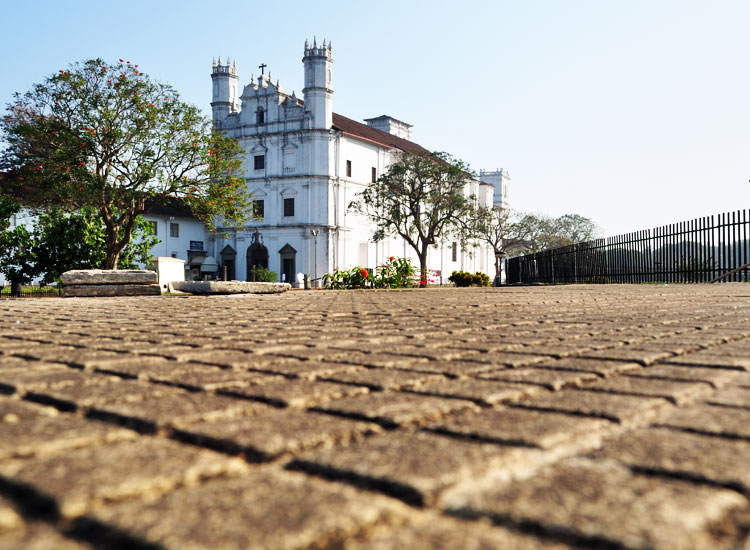 The revered Roman Catholic Church of St. Francis of Assisi is one of the best churches in Goa. It is known for its spectacular Baroque and Corinthian architecture and finely inlaid interiors. Re-live the olden days. Adoring the walls are beautifully painted panels depicting the life of St. Francis of Assisi. It is the only church in Goa that has a museum in its premises containing paintings, artifacts and sculptures. 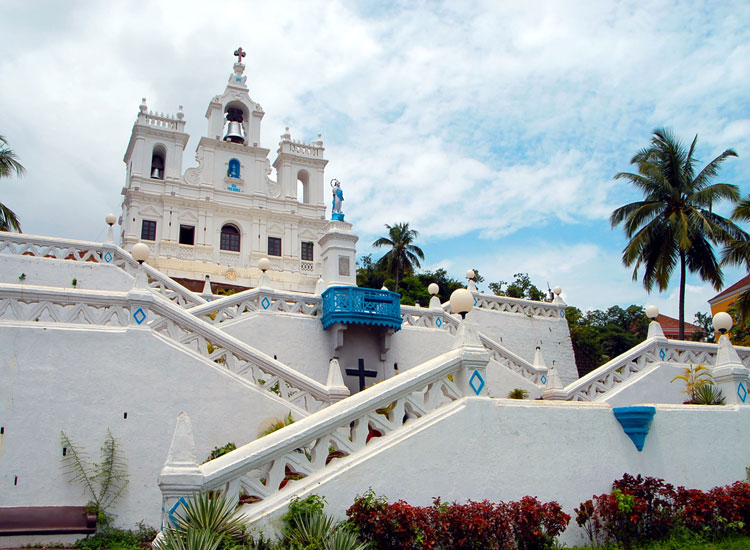 The next treasure of Goan heritage brings us to the Church of Our Lady of the Immaculate Conception. One of the oldest Churches in Goa, it is located at the centre of Panaji. The impressive church with the statue of Mother Mary at the front casts a watchful eye over all. Over 450 years old, it was originally built to welcome sailors home. Now, it is one of the most visited heritage sites in Goa. 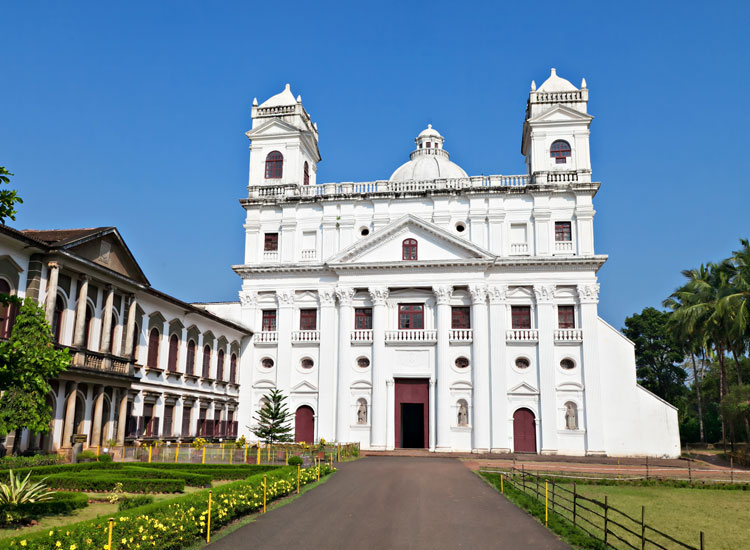 Inspired from St. Peters Basilica in Rome, the Church of St. Cajetan is one of the unique churches in Goa. It was built by Greek and Italian priests, defying the norms of the era. The well preserved masterpiece does not reveal the actual age which is almost 300 years. In fact it will be not wrong to say that it is one of the most beautiful churches in Goa. The main altar is dedicated to the Holy Mother. A visual treat, the craftsmanship of the Baroque style is one you must pay a visit to. 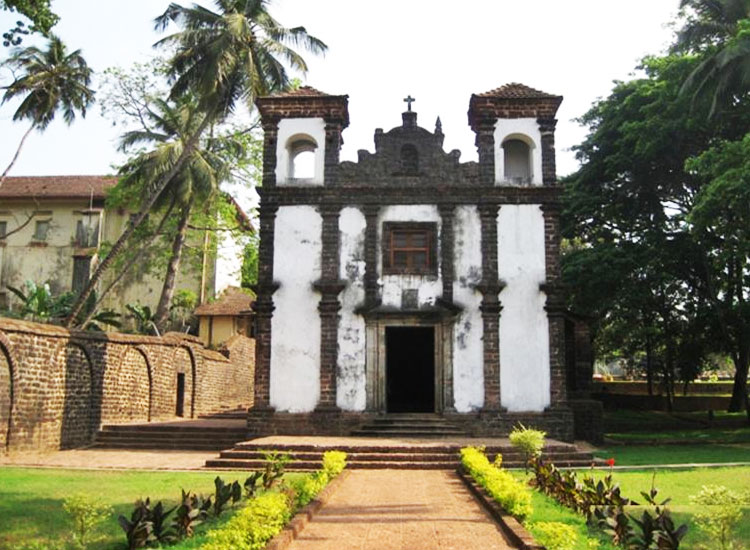 One of its kind to be built in Goa, Chapel of St. Catherine is a Christian ecclesiastical church. Though small, it is an impressive structure. Built by the Portuguese governor in 1510 to mark their entry and rule in Goa. As you enter the church take a look at the inscription on a stone slab which essays this fact. The witness to an extensive history the church is one of the best heritage sites in Goa. 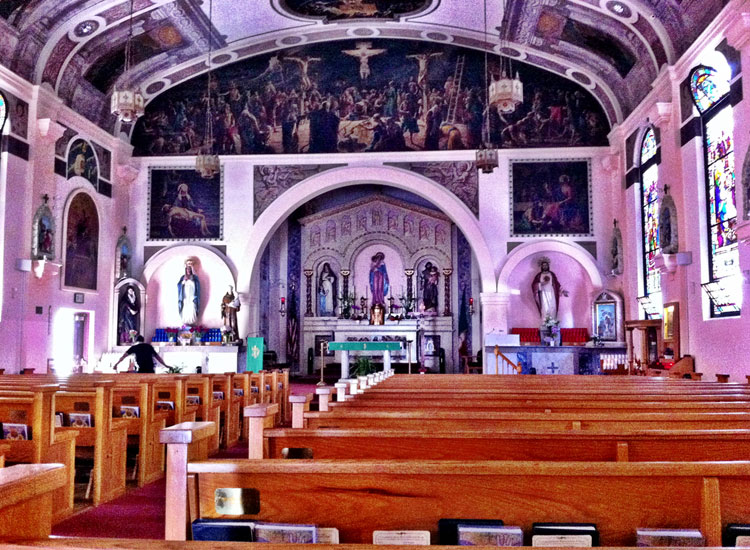 The holy shrine of the Blessed Virgin Mary, the Church of Our Lady of the Rosary is one of the simple yet elegant churches in Goa. It is one of the best samples of Renaissance architecture in India, brought to Goa by the Portuguese. It would not be wrong to say that this church is the most Portuguese of all the Goan churches. It is not disturbed by Goan architectural solutions and have their roots intact in the Portuguese traditions.

Stay at the heritage hotels of Goa to make your tour more interesting. 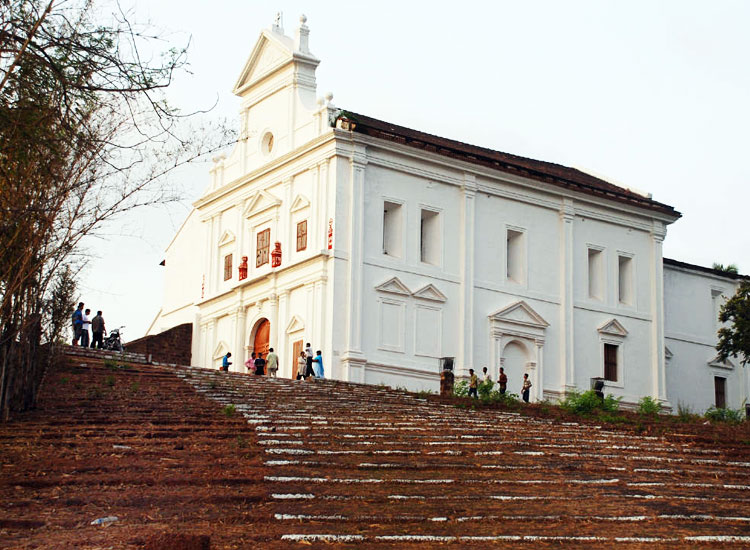 Built atop Monte Hill, the highest point in Margao, The Chapel of Our Lady of Monte overlooks the scenic panorama. The simple and elegant white-washed structure is one of the best heritage sites in Goa. The chapel is dedicated to Mary, the mother of Jesus, known by Our Lady of Piety (or Nossa Senhora de Piedade). The church is almost isolated, with a handful of tourist paying homage. 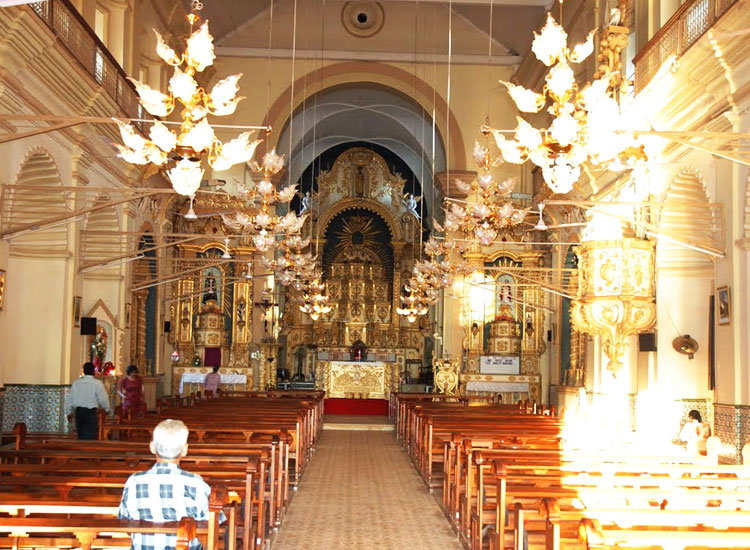 Built by local communities in the 16th century, St. Alex Church is one of the unique heritage sites in Goa. The impressive architecture is marked by a magnificent dome in the middle and two towers. Dedicated to St. Alex and Our lady, it is the first such Grotto amongst all churches in Goa. The church hosts many feasts throughout the year. Walk around the chapel and you can also find ruins of a temple. 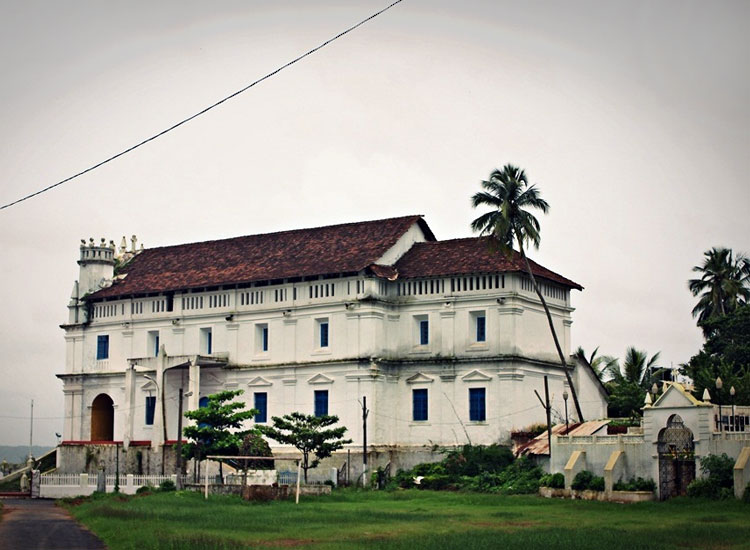 Next on our list of the heritage sites in Goa, we have one of the most beautiful churches in Goa, Our Lady of Penha de Franca Church. It is located on the banks of Mandovi River. The church is an architectural masterpiece, dedicated to NossaSenhora de Penha de Franca, who is revered by sailors for safe voyage. On you visit enjoy the scenic setting of the church in addition to its beautifully embellished interiors, stained glass and a high vaulted ceilings adorned in paintings. 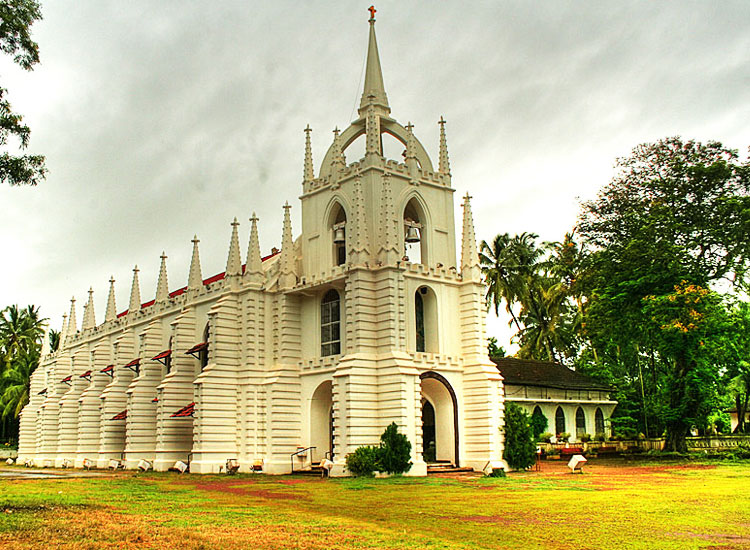 A fine example of Neo-Gothic style architecture, Church of Mae de Deus is stern, stark and yet glamorous. One of the best churches in Goa, it is a treasures of the rich colonial heritage. With another epithet as Mother of God Church, this sacred place displays it charm at night when attractively illuminated. This church houses a miraculous statue of Mae de Deus which was taken from the ruins of the convent of Mae de Deus at Old Goa. 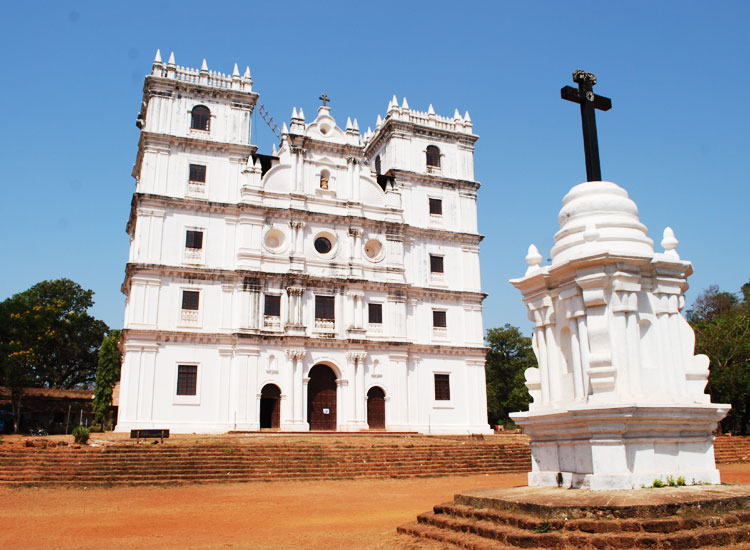 Talaulim hosts the scared Church of St. Ana. This remarkable masterpiece of ancient Christian architecture is dedicated to St. Ana. An interesting feature of the church which grabs attention is the hollow walls through which one can walk in confidentially for confession. The religious monument is well-known to depict the colonial Portuguese Baroque architecture. Re-live history, feel blessed on your visit. Do not miss to pay your respects to the amazing heritage church of Goa.

Founded by Jesuits, St. Andrew’s Church is one of the best heritage sites in Goa. A magnificent façade is the center of attraction. This church has confronted the challenges of time. The beautifully adorned alcove houses idols of three shepherd children with the beautifully carved sculpture of Our Lady of Fatima. The statue of Joseph Vaz can also be spotted in the church. A grand celebration takes place on every 30th of November.