Located near the Chattar Sagar Lake, the Jagram Durg, Pali evokes the medieval aura and grandeur which recreates the splendor of the yesteryears. If you are planning a royal retreat this season then you must plan a stay in the Jagram Durg in Pali.

Jagram Durg in Pali is an age old palatial mansion whose magnificent structure is an architectural marvel. Relax in the well furnished and spacious rooms of the mansion whose rooms are adorned with antique furniture, royal interiors, giant sized portraits which recall the era of Rajput grandeur.
Room Facilities:

From the multicuisine delicacies to the earthy and exotic Rajasthani cuisine, the in house restaurant of the Jagram Durg, Pali is the ideal destination to pamper your taste buds.

Pali is an ancient city famous for its temples and forts. From the magnificent Havelis to the ancient temples in Rajasthan, Pali is the ideal destination for tourists. Enjoy the Hatundi Rata Mahabir Temple, the Ranakpur Jain Temple and the Surya Narayan Temple on your tour to Pali. 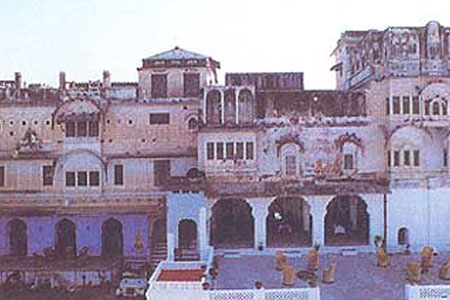